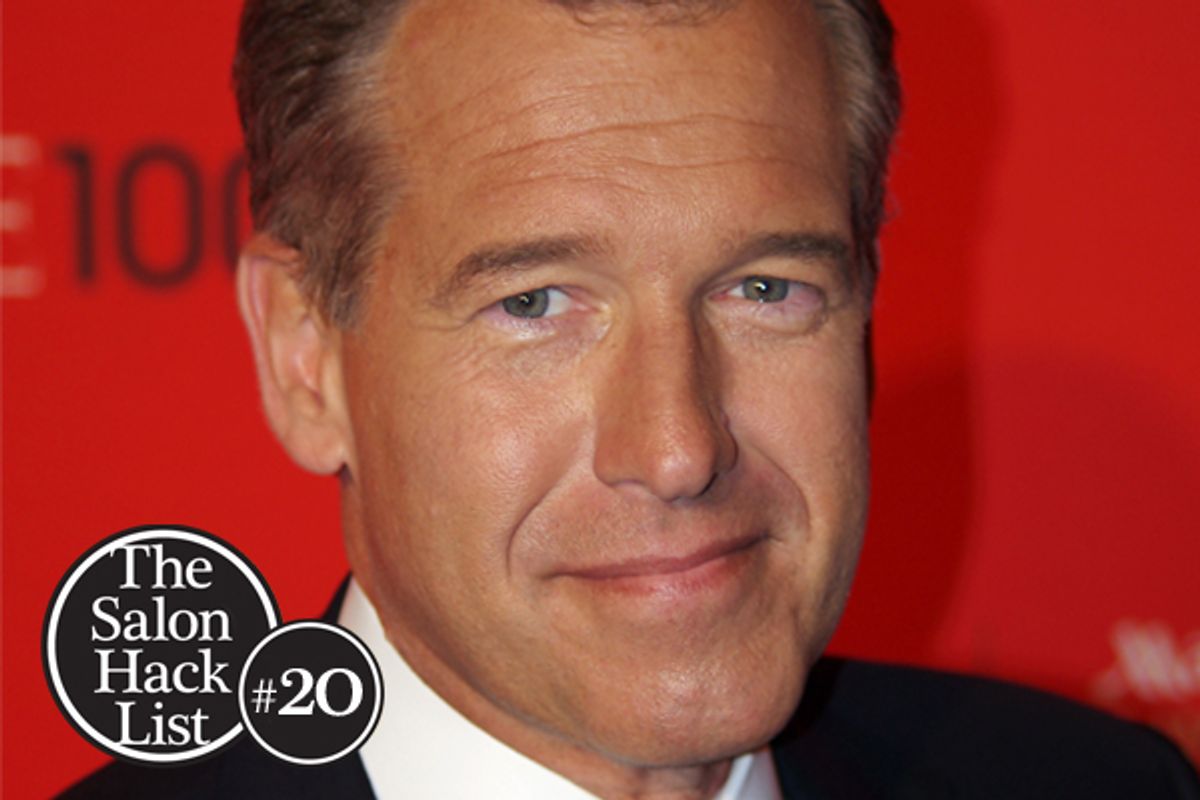 I’m sorry, but I’m just sick of him. I’m sick of his much-remarked-upon sense of humor, notable only because a news anchor capable of verbal communication that doesn’t involve a teleprompter is treated like a dog who knows a particularly clever trick. I’m sick of his constant invocation of his blue-collar Jersey roots, I’m sick of his stories about listening to Springsteen with his old friends Lou the mechanic and Sal the bricklayer. I’m sick of his perfect imitation of the ridiculous old flat-accented voice-of-god news anchors.

NBC gave him a talk show with the deeply stupid name “Rock Center” (no one in the known history of New York has referred to Rockefeller Center as “Rock Center,” I’m sorry that “30 Rock” took the name you wanted but you have to come up with something different), where he is not quite as funny as a late night talk show host and not quite as newsy as a news show host. And, obviously, not as opinionated as a cable news show host, because as a network evening news anchor, Mr. Williams is not allowed to think for himself, or hold opinions on issues other than the annoyingness of those Brooklyn Hipsters.

But it's the never-ending, nonstop, beat-you-over-the-head blue-collar Jersey Shore shtick that grates the most. It's desperate and unconvincing, coming from a multimillionaire television personality. We get it! You used to be "authentically" American, according to some arbitrary signifiers! (And if you're so damn proud, why did you lose your accent?)

HACKIEST 2011 MOMENT:
A January appearance on “The Late Show With David Letterman," in which Letterman, who in recent years has often displayed an environmentalist streak, asked Williams if recent freak weather events could be traced to anthropogenic climate change. Williams, mugging but clearly uncomfortable, declined to even acknowledge the existence of climate change itself. He refused to “take sides,” and joked, “What have I done to deserve this?” A perfect encapsulation of the uselessness of the “objective” (and idiotic) network nightly news anchor, too cowardly or dumb to “take sides” on a “debate” between craven political actors and the nearly universal scientific consensus. (But why would we expect a regular guy's guy from Jersey to understand all that complicated climate science? He's too busy cruising the shore in his souped-up Bel Air Hardtop with Mary and Puerto Rican Johnny to examine the evidence!)