Robert Downey Jr. returns as the great detective, facing his nemesis in the cheerful, idiotic "Game of Shadows" 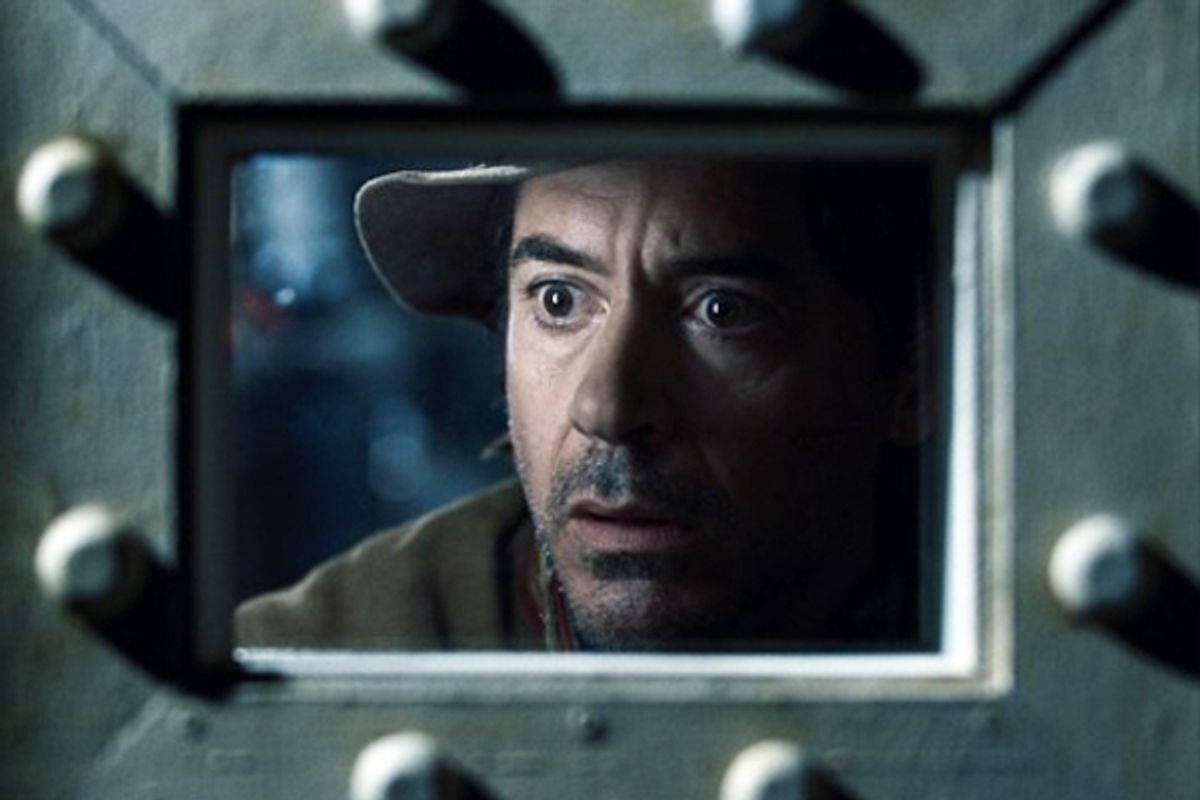 Robert Downey, Jr. in "Sherlock Holmes: A Game of Shadows"
--

It's definitely possible to have a good time at "Sherlock Holmes: A Game of Shadows," the latest motion picture offering from Guy Ritchie, the erstwhile Mr. Ciccone. If you saw Ritchie's egregious but enjoyable Christmas 2009 hit "Sherlock Holmes," you already know the rules: Don't expect anything that bears any resemblance to Victorian England, beyond the top hats and some mud. Basically, we're talking the authenticity level of a suburban St. Louis high school production of "Oliver Twist." And definitely don't expect any relationship to the canonical stories of Arthur Conan Doyle, beyond the names of the characters and the suggestion that the relationship between Sherlock Holmes and John H. Watson, M.D., has a kind of homoerotic subtext. Given Robert Downey Jr.'s queeny, hilarious, cranked-to-11 performance as the titular genius, you might actually not want to call that subtext. It's more like supertext, if that's a word. (Is Downey's full-scale "queering" of the Holmes character a liberatory act or a homophobic stereotype? Get to work, grad students!)

You also need to remember that Ritchie is a technician of undoubted visual prowess with almost no interest in telling a story (let alone ability to do so), and that he's apparently stuck in an early-2000s, post-"Matrix" action-movie aesthetic. Slowing stuff way the heck down and then speeding it up again; showing fight sequences multiple times so we're never quite sure which of them "really" happened; bleaching out all the color with sepia tones and then bringing it back, lysergic-style -- we get all that and more in "Game of Shadows." This movie may not technically qualify as steampunk, but it's somewhere in that "Wild Wild West" neighborhood: While the heavy explosives and firearms used so generously herein could hypothetically have existed in the 1890s, the period is not generally depicted with such an intense and stupid degree of boom and blammo.

That said, I could not entirely resist the idiotic allure of "Game of Shadows," the second movie in Ritchie's series that has loosed the most unhinged, unkempt and unclean version of Conan Doyle's legendary detective ever seen. Downey appears to have concocted the character from fragments of free-floating fantasy. At one moment Holmes has the mannerisms of a fussy Victorian lady, telling the newly minted Mrs. Watson (Kelly Reilly), whose existence he clearly deplores, "May I say it was a lovely ceremony? Many a tear was shed in joy." At the next he's an ass-kicking martial arts expert, locked in hand-to-hand combat with a Cossack assassin in a London brothel or facing the private Teutonic army of the infamous professor James Moriarty (Jared Harris), noted mathematician and "Napoleon of crime."

Holmes' disguises -- as a Chinese opium addict, or a female train passenger, or an article of furniture -- are entirely ridiculous (in the books, they're supposed to be mind-bendingly convincing), and Downey never remotely seems like a plausible 19th-century gentleman instead of a creative, funny performer who's making it up as he goes along. Still, that's just it: This is Bob Downey, simultaneously playing the fool and pulling your leg, and even at his dumbest he's semi-irresistible. "Madam, this is a glorious hedgehog goulash," he tells his hostess in a Gypsy caravan. (She's played by Noomi Rapace of the Swedish "Dragon Tattoo" trilogy.) "I can't remember when I've had better." Sherlock Holmes? Not much. But did it get a laugh? You bet. Indeed, I can only hope Downey is in improv mode much of the time, because if not, someone actually wrote the verb "noshing" and then put it in the mouth of a fictional character 120 years ago.

Speaking of writers, this time around, Ritchie has a new writing team, husband-and-wife duo Kieran and Michele Mulroney. They have separated Holmes from Watson, once again agreeably played by Jude Law. (It's nice to see the good doctor portrayed as less of a buffoon than usual, even if Law seems wrong for the part in terms of age, physique, class and most other attributes I can think of.) But the petulant Holmes wants to pry his beloved companion and sidekick free from his bride, of course, and anyway from the vengeful Moriarty, who is apparently bent on starting the Great War 20 years early, yearns to exterminate them both and Mrs. Watson too, just for the hell of it. Twitchy and irritable, with beady eyes and little Chiclet teeth, Harris' Moriarty is one of this movie's great strengths, along with Stephen Fry as Holmes' even more eccentric brother, Mycroft. (Although once again -- and I'm tired of saying this -- he's nothing like the reclusive Mycroft in Conan Doyle.)

There's no point wasting your time or mine with plot summary, is there? There's a whole lot of fighting and shooting, like 600 times the action of the entire Holmes opus in one two-hour movie. Holmes hardly ever uses his legendary deductive powers, except when he's in bitchy, oh-snap rivalry mode with his brother. Moriarty is apparently behind a series of anarchist-related assassinations and bombings in Europe, mostly just because he's an evil genius in an action movie. You could argue that some parallel is made with the current terrorist hysteria -- and indeed the word came to prominence at exactly that historical period -- but that sort of thing goes way beyond Ritchie's mission statement.

I will mention that Rachel McAdams returns, briefly, as Irene Adler, the only woman ever to challenge Holmes' commitment to homosocial chastity and cocaine, but also that the level of semi-gay double entendre between Holmes and Watson is carried almost to an offensive locker-room extreme. "Sherlock Holmes: A Game of Shadows" is occasionally thrilling, sometimes hilarious and mostly absolute claptrap. Think of it as a lot like drinking a fourth cup of holiday eggnog: Not really a good idea at all, but you might have fun.