The many fictions of Huckabee's abortion forum 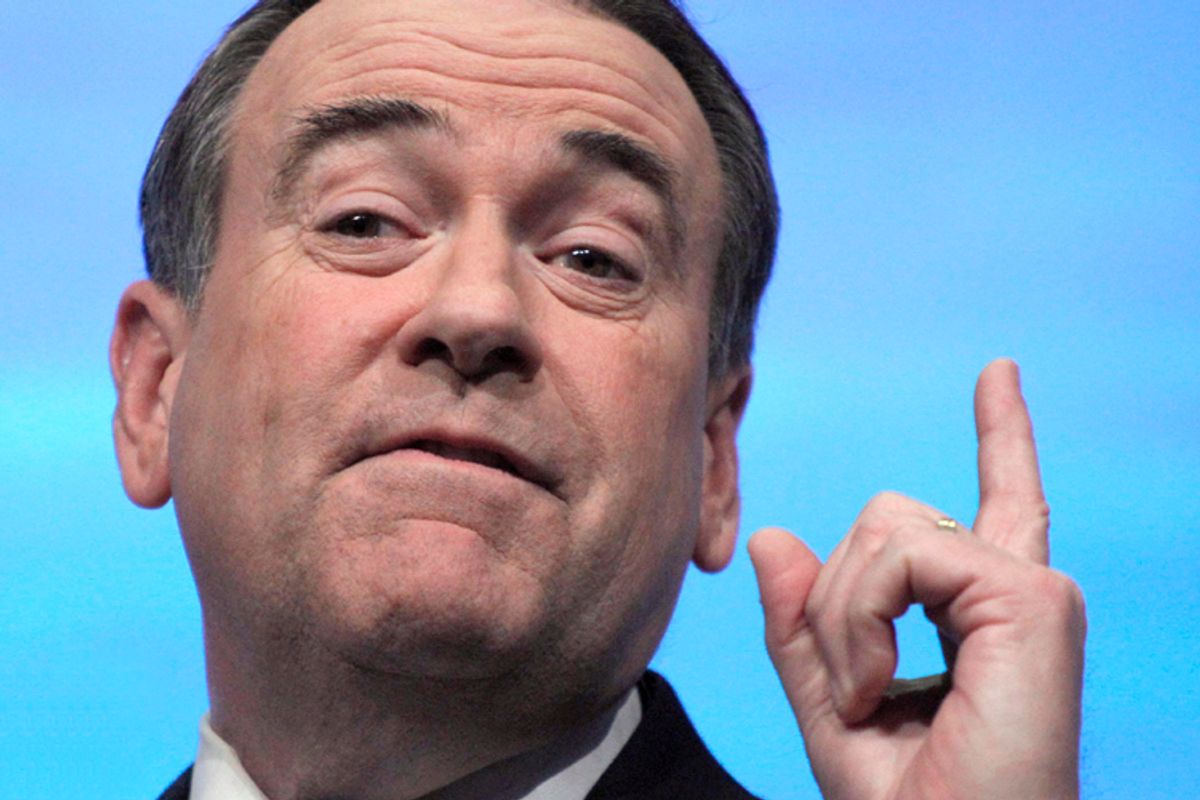 Yes, there was another Republican presidential forum in Iowa last night, an opportunity for four candidates to outdo each other as saviors of babies and makers of elaborate promises about overturning Roe v. Wade.

The Family Leader, whose leader Bob Vander Plaats spoke at the event, already had its own "social issues" forum a few weeks ago. And before that, there was plenty of anti-choice red meat at Sen. Jim DeMint's, R-S.C., forum. But none of that abundant genuflecting to values voters sufficed -- it wasn't enough to erase the massive sense of grievance the candidates were clearly trying to mobilize.

You wouldn't want to play a drinking game pegged to the outright lies and distortions told at the event, hosted by Citizens United and Mike Huckabee, whose documentary "The Gift of Life" also premiered. It was attended by Newt Gingrich, Rick Perry, Michele Bachmann and Rick Santorum. (Mitt Romney and Ron Paul had other commitments.) It was the stuff of stomach-pumping. President Obama notoriously supported Kathleen Sebelius' decision to overrule the FDA and keep Plan B away from most teenagers, but Bachmann made it sound like Obama wanted to give your tween daughter "the morning-after abortion" pill anyway. How's that for compromise and reason? (Since it may need to be said again, emergency contraception doesn't end a pregnancy. It prevents ovulation.) Nearly everyone made repeated references to federally funded abortions, which under the Hyde Amendment remain practically nonexistent. And Bachmann made her favorite baseless claim, that "repealing Obamacare" is a pro-life cause, despite the fact that the Affordable Care Act didn't change the status quo on abortion coverage, much to pro-choicers' disappointment.

Throughout the evening, it was clear that even though it feels like reproductive rights are under assault from every angle, anti-choicers still feel like they're losing and that no one cares about them.

That sense of beleaguerment is Santorum's specialty -- it fuels resentment to have never experienced a bump in the polls. He mimicked the press asking him, “ 'Are the social issues really as important? And isn’t just the economic issues? Oh, it’s just the economic issues.' I always tell the press, has the vote yet been cast?" He insisted that abortion (and implicitly, homosexuality) “are not these unique set-aside issues.”

Then it got really motivational. "You may think we’re failures. We’re not. We’re not," Santorum insisted.

It depends how you measure success. As I reported recently, the anti-choice movement has succeeded in passing lots of laws that make abortion odious, shaming and expensive, but they have no widespread public support for an outright ban of abortion, a handful of Iowa voters aside. Not only does the movement keep having its hand slapped by the federal courts, it's split by a debate over how to push its legislative agenda in the first place. The incrementalists, however miserable they are making women's lives, have a pretty strong argument that their way is best, even if they wouldn't have gotten applause at the forum tonight.  A total ban in Mississippi, the Personhood amendment, that would also have gone after birth control and IVF, failed at the ballot box. Just today, the leader of the Ohio Senate suspended debate on the so-called Heartbeat Bill, which was trying to ban first-trimester abortions.

None of this is reason for pro-choicers to take a breather, but if anti-choicers feel like failures, it's probably because the majority of the country doesn't agree with them.