2011 was plagued by droughts, floods and tornadoes. It's high time we take global warming seriously 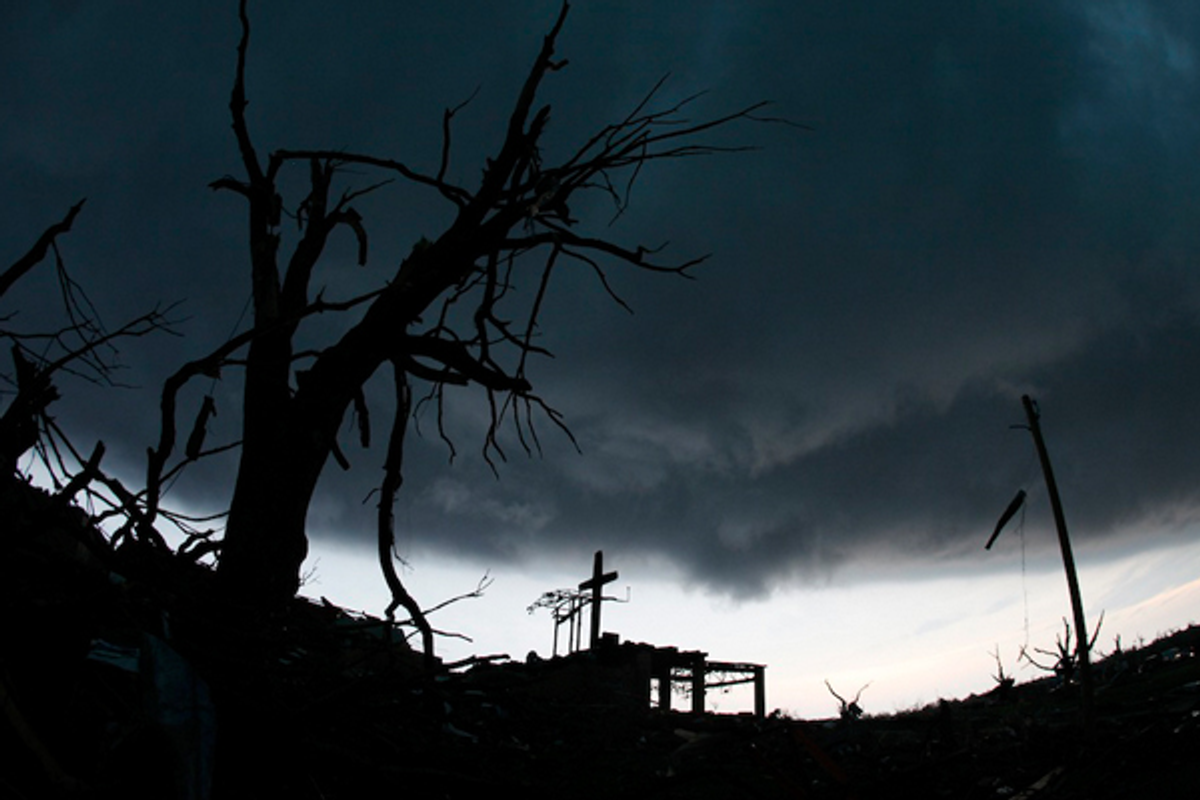 A cross stands atop a severely damaged church in Joplin, Mo. (AP/Charlie Riedel)
--

At the expense of being tedious, from a climatological perspective, 2011 was a real killer — both figuratively and literally. If not quite so hot as 2010, which tied 1998 for the warmest in recorded history, it’s likely to end up among the top 10, all occurring over the past 15 years according to the World Meteorological Organization.

Closer to home, extreme drought and wildfires turned Texas and adjacent Southwestern states into a living hell last summer. In Texas alone, 3 million acres burned up. Conditions haven’t improved much since. Cattlemen wonder if their way of life can be sustained there very much longer. F5 Tornadoes destroyed huge swaths of Tuscaloosa, Ala., and Joplin, Mo. In August, Vermont and upstate New York suffered record hurricane damage — Vermont!

So what else is new? When it comes to climate change, it appears that the stronger the evidence, the weaker the response. Recent United Nations climate talks in Durban, South Africa, accomplished little but to postpone things until 2015. Then negotiators will try to devise what the Washington Post called “global climate pact with legal force, applying to all nations.”

What with China, India and the United States resisting binding limits to greenhouse gas emissions, the odds seem remote that can happen.

Indeed, the mere presence of the words “climatological” and “World Meteorological Organization” in the first paragraph above all but guarantee a barrage of furious emails from partisans dogmatically certain that climate change is a scientific hoax conceived by freedom-hating one-worlders seeking to impose eco-tyranny. It’s remarkable how well some people can type with both eyes closed and their fingers stuck in their ears.
Republican presidential candidates all but unanimously (if belatedly in a couple of cases) resist climate science. In GOP circles, it’s considered sensible to warn against the grave threat of Shariah law being imposed in Oklahoma, but weeks on end of rainless 110 degree afternoons, not so much. Democrats like President Obama appear to have concluded that global warming is like gun control, where reasoned self-interest has little chance against well-organized fanaticism. So why bother?

Consider, for example, the experience of professor Richard Muller, a University of California at Berkeley physicist and self-proclaimed warming skeptic. Suspecting that climatologists weren’t up to snuff as mathematicians — physicists think that about everybody — Muller put together the Berkeley Earth Surface Temperature project (BEST), secured partial funding from fossil fuel-burning interests at the Charles G. Koch Foundation, and set about to reexamine the data.

To his credit, Muller’s analysis convinced him he’d been wrong. “Our results,” he conceded in a Wall Street Journal column, “turned out to be close to those published by prior groups. We think that means that those groups had truly been very careful in their work, despite their inability to convince some skeptics of that. They managed to avoid bias in their data selection … Global warming is real. Perhaps our results will help cool this portion of the climate debate.”

Fat chance. Alas, to some, the scientific method itself -- i.e., peer review by qualified experts -- smacks of conspiracy. Ignoring the math, denialists went straight to motive, denouncing Muller as a “befuddled warmist,” who’d engineered a “predetermined con.” One Marc Morano, a former aide to Oklahoma Sen. James Inhofe who devotes full time to the cause, has urged that climate scientists “deserve to be publicly flogged.”
After all, isn’t science “elitist” by definition? A paper by the Australian intellectual Clive Hamilton titled “Why We Resist the Truth About Climate Change” draws fascinating parallels between contemporary attacks on climatologists and earlier attempts to ignore unwelcome realities.

In 1920s Germany, for example, right-wing nationalists fearful that Albert Einstein’s general theory of relativity would somehow lead to the dissolution of the social order denounced what they called “Jewish science.” Prominent scientists, including a Nobel laureate, got up petitions supporting what they called “Aryan Physics,” ultimately convincing Einstein to flee to the United States.

Even more pertinently, Hamilton compares the contumely and scorn visited upon Winston Churchill for correctly assessing Hitler’s motives unfashionably early. By comparison, his Tory compatriots watched “Triumph of the Will,” and evidently saw in it a glorified Boy Scout jamboree.

Of course, it doesn’t follow that because Einstein and Churchill were right, that every climate science professor is infallible. Hamilton notes the ironic appearance of right-wing deconstructionists, deploying “the arguments first developed by the radical social movements of the 1960s and 1970s to erode the authority of science.”

Everybody wishes global warming weren’t happening. But the evidence is overwhelming. Alas, one can’t help doubting that human beings, genetically predisposed to tribalism, can quit fighting each other long enough to act.