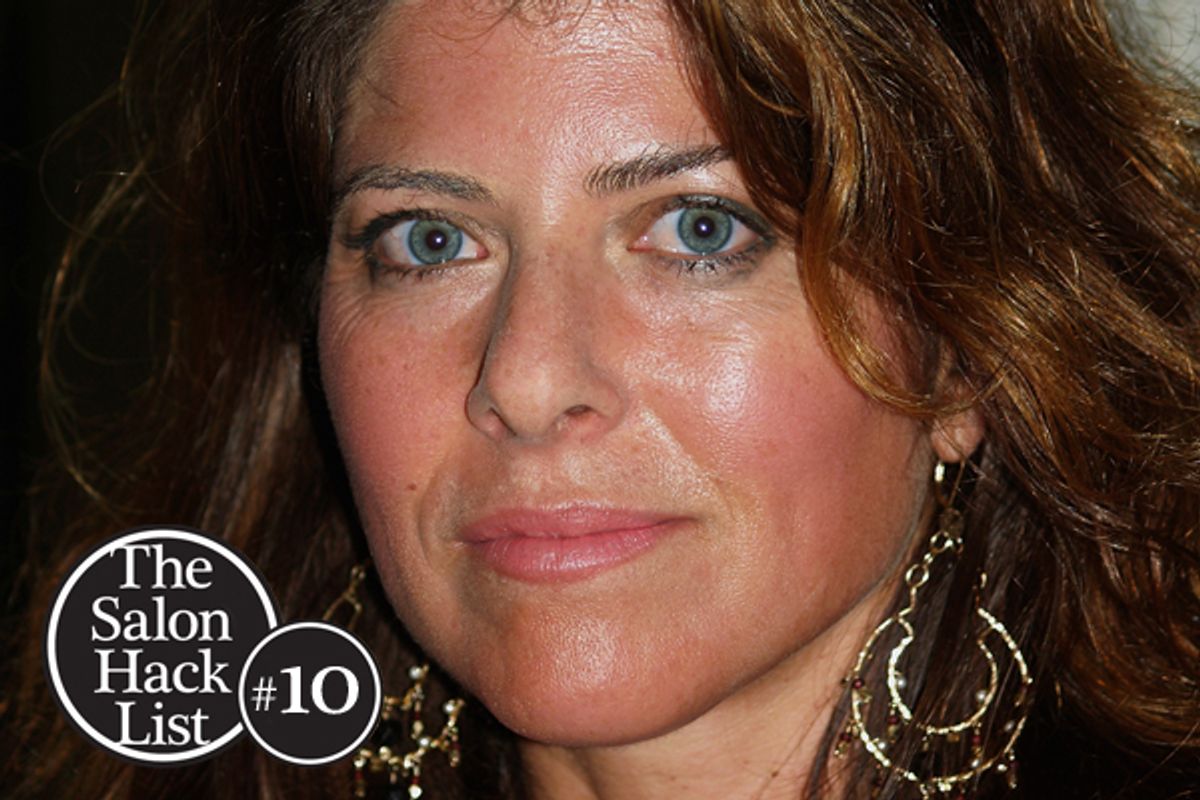 In 2004, Naomi Wolf wrote a powerful story for New York magazine about being sexually harassed by a powerful and widely respected man, and failing to come forward for years because coming forward with a harassment claim is often more damaging for the accuser than for the accused.

In 2010 she participated in the widespread questioning of the secret ties and motives of the women who accused Julian Assange of sexual assault and rape. In a sarcastic open letter to Interpol, Wolf seriously downplayed the severity of the claims levied against Assange, in order to argue that he's the victim of a political conspiracy.

I see that Julian Assange is accused of having consensual sex with two women, in one case using a condom that broke. I understand, from the alleged victims' complaints to the media, that Assange is also accused of texting and tweeting in the taxi on the way to one of the women's apartments while on a date, and, disgustingly enough, 'reading stories about himself online' in the cab. Both alleged victims are also upset that he began dating a second woman while still being in a relationship with the first. (Of course, as a feminist, I am also pleased that the alleged victims are using feminist-inspired rhetoric and law to assuage what appears to be personal injured feelings. That's what our brave suffragette foremothers intended!).

Her account to police, which Assange disputes, stated that he began stroking her leg as they drank tea, before he pulled off her clothes and snapped a necklace that she was wearing. According to her statement she "tried to put on some articles of clothing as it was going too quickly and uncomfortably but Assange ripped them off again". Miss A told police that she didn't want to go any further "but that it was too late to stop Assange as she had gone along with it so far", and so she allowed him to undress her.

According to the statement, Miss A then realised he was trying to have unprotected sex with her. She told police that she had tried a number of times to reach for a condom but Assange had stopped her by holding her arms and pinning her legs. The statement records Miss A describing how Assange then released her arms and agreed to use a condom, but she told the police that at some stage Assange had "done something" with the condom that resulted in it becoming ripped, and ejaculated without withdrawing.

That seems a bit less than consensual! And:

The following day, Miss W phoned Assange and arranged to meet him late in the evening, according to her statement. The pair went back to her flat in Enkoping, near Stockholm. Miss W told police that though they started to have sex, Assange had not wanted to wear a condom, and she had moved away because she had not wanted unprotected sex. Assange had then lost interest, she said, and fallen asleep. However, during the night, they had both woken up and had sex at least once when "he agreed unwillingly to use a condom".

Early the next morning, Miss W told police, she had gone to buy breakfast before getting back into bed and falling asleep beside Assange. She had awoken to find him having sex with her, she said, but when she asked whether he was wearing a condom he said no. "According to her statement, she said: 'You better not have HIV' and he answered: 'Of course not,' " but "she couldn't be bothered to tell him one more time because she had been going on about the condom all night. She had never had unprotected sex before."

Whether or not Assange's case was taken more seriously by authorities than other typical rape cases for nakedly political reasons -- and it very probably was -- the fact remains that Assange was accused of serious sexual crimes by two separate women. And Wolf joined the chorus of people who defended Assange from those charges based solely on the fact that Assange was a guy whose work they liked. He was important and did good deeds, so the two separate women accusing him of violent non-consensual sexual encounters must be wrong. (And, indeed, Wolf went on to argue that they should be named.)

Since publishing that vile Huffington Post piece a year ago, Wolf has continued to defend herself, claiming that the Huffington Post piece was "satirical." It was, as I said, sarcastic, but the aim of the satire was to lampoon Interpol as "the dating police," which necessarily means pretending a rape charge is a simple complaint that the sex was bad.

I dunno, I leave it to you to try to parse the myriad arguments she makes in her account of a heated discussion with Salon's Irin Carmon. How about this closer:

Wolf concluded, “I don’t think that it helps for the feminist establishment to not recognize that there is nuance in this situation. And that doesn’t mean that ‘no’ doesn’t mean ‘no,’ but that we need to evolve a legal concept where ‘yes’ is acknowledged, too.” Though, she added, “The ‘yes’ shouldn’t dilute the ‘no.’”

HACKIEST 2011 MOMENT:
Wolf's need to prove that Assange is the victim of a politically motivated investigation has her continuing to distort the nature of the accusations in order to make them seem like something other than rape. Like: "(There is one point at which Miss W asserts she was asleep – in which case it would indeed have been illegal to have sex with her – but her deleted tweets show that she was not asleep, and subsequent discussion indicates consent.)" Oh, deleted tweets, you say? Drop all the charges!
- - - - - - - - - -
(Read the introduction here. Read the 2010 Salon Hack 30 List here.)