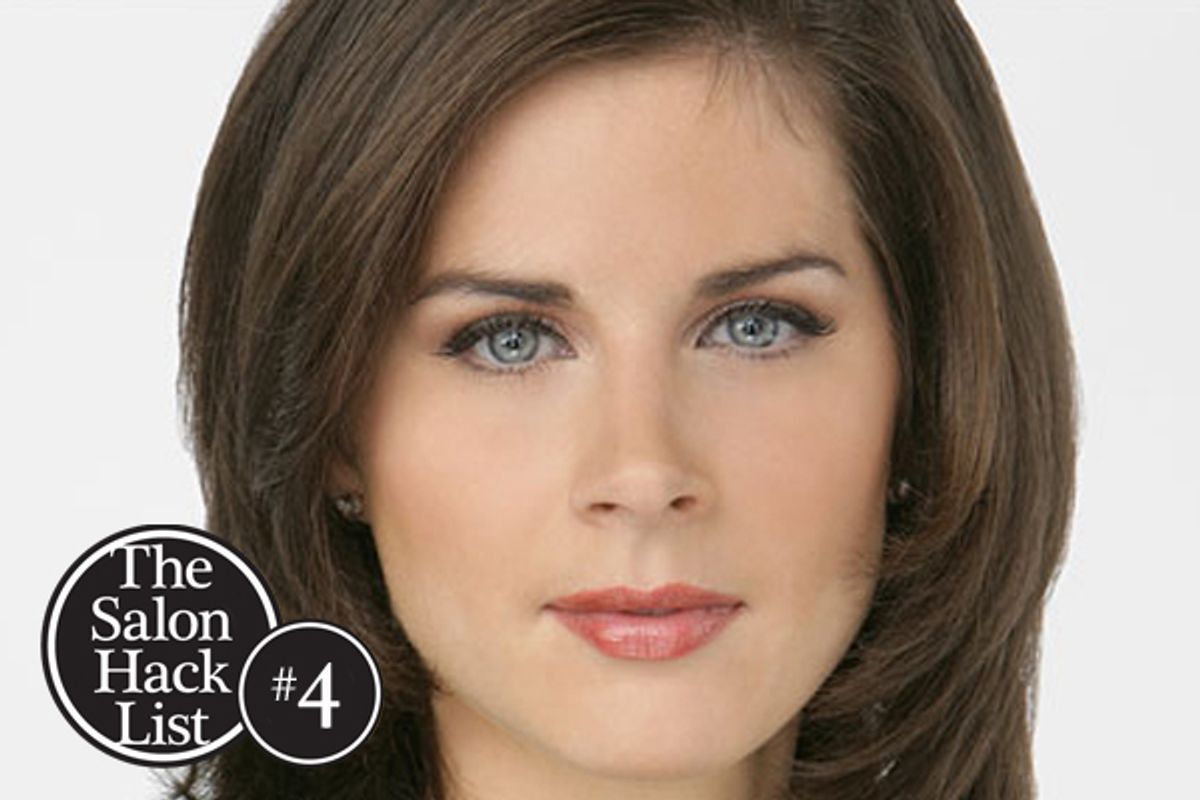 Erin Burnett was a perfect fit at CNBC, a business news network that interprets its mission as reporting for business leaders and the finance industry and not on them. A former Goldman Sachs analyst who also did a stint at Citigroup (business journalism might be worse than political reporting when it comes to team-switching and fraternizing among "sources" and "journalists"), Burnett epitomizes the CNBC worldview, where the ideal business journalist is a levelheaded interpreter of the omniscient market and ally of the wise men who've been enriched by it. Making the switch to being a news program host for us regular folk, on CNN, has not been without a couple of hitches for Ms. Burnett. Turns out, regular people don't naturally perceive CEOs and bankers as heroic figures, especially in the midst of a mass employment and consumer debt crisis that the wealthy have escaped unscathed.

Burnett, despite her youth, is a relic of a bygone age. She embodies '90s "market populism," to use Thomas Frank's phrase, now still surviving on our airwaves as a zombie idea. The idea of America as a mass "shareholder society" is a sick joke in a nation currently sharply divided between struggling debtors and bailed-out creditors, but the dream is popular enough among the well-off professionals in charge of our news networks that CNN pinned its prime-time hopes on Burnett appealing to a mass audience. (If ratings are any indication, it’s not working.)

CNN, the network that refuses to take a side on anything, naturally assumes that being objectively pro-finance is the same thing as being objective. Hence her parroting the Wall Street party line that "everybody" (meaning "everybody" in the sense of American citizens and not financial professionals) was "responsible" for the massive financial crisis that plunged us unto a recession. This came after her revisionist claim, on Bill Maher's show, that "everyone in this country knew there was a housing bubble," an attempt to excuse the blinkered cheerleading of pre-crash CNBC. (She followed up with a line treating a hypothetical "soak the rich" tax as an objectively bad idea, asserting that Wall Street had already lost too much in the crisis to require such a draconian measure.)

And there was her amazing response to Donny Deutsch's 2009 suggestion that Morgan Stanley and Goldman Sachs give some minuscule percentage of their obscene profits to Haiti. "Hold on, Donny," she shouted. "What would they do with all that money down there in Haiti?" I'm sure they could think of something.

Finally, I have no problem with professional entertainers playing make-believe on Donald Trump's asinine "reality" show, but it's embarrassing for a supposed journalist to pretend to be the fake-billionaire's "advisor," a part Burnett played on "The Apprentice" before she left the NBC family.

HACKIEST 2011 MOMENT:
Clearly, her confused, confrontational response to Occupy Wall Street. She saw "bongos" and "a clown," but these stupid fools didn't know how wonderful Wall Street was, and how much it helps all of us, every day! One person didn't even realize that TARP was an unalloyed positive thing for the nation as a whole! Burnett's refusal or inability to understand what could possibly outrage people about the extraordinary actions involved in rescuing Wall Street from its colossal mistakes as the rest of us muddle through a protracted non-recovery was only improved by her hostile and dismissive treatment of regular people actually endeavoring to make the country a slightly fairer place. If you want snide, condescending apologism for powerful people you should rightfully worship as your betters, CNN's got the show for you!
- - - - - - - - - -
(Read the introduction here. Read the 2010 Salon Hack 30 List here.)