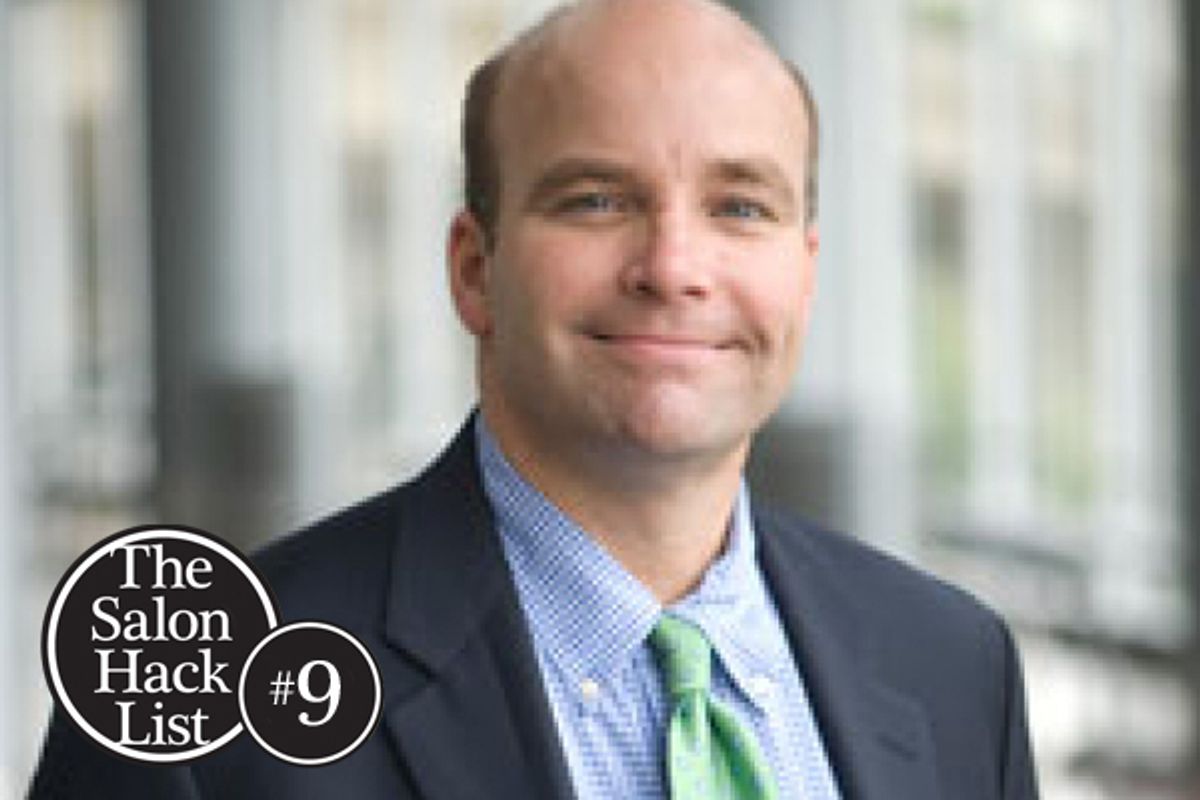 Politico is everything that's wrong with political reporting and Mike Allen is its mascot. He's not the worst person there, and he's not solely responsible for the toxic culture of that depressing repository of intentionally trivial minutiae, masturbatory speculation pretending to be analysis, and über-cynical play-by-play reports on "spin" and "messaging" (that would be Jim VandeHei, who is responsible for those things), but he is its superstar.

Allen, a weird guy who refuses to, say, name his hobbies on the record to a man writing a friendly profile of him, writes what is basically a morning email newsletter full of links to various political stories, and this newsletter basically "sets the agenda" for the people who decide what constitutes important political news at the cable news channels. It is seriously 90 percent capsule summaries of day-old news articles, and what original Allen-added content there is is usually pretty banal. (When it's not aggravatingly stupid.) Sometimes he just randomly makes things up, for fun, and then those things become major national news stories for like a day, which is certainly good for Politico's traffic.

Allen's love of the worst of American politics is sincere and heartfelt. Here he is in August 2010 revealing that "the dream of every reporter" is endless legislative gridlock enabling even more grandstanding by self-righteous "centrists":

MA: (laughing) I don't know, but I can tell you the press loves the fact that Ken Buck, he'll definitely be covered. Very colorful, he definitely will be good copy. It's just like the dream of every reporter is that the Republicans will pick up nine seats, and that Marco Rubio wins in Florida, because Hugh, you know what that means?

It means ... an absolute nightmare for people who don't get off on Senate bickering.

Allen, who notoriously talks in the same canned talking points as the politicians he covers, is one of those political reporters who brags of never voting and professes to have no ideology to betray. Certain things are generally true of reporters who adopt that hoary no-ideology line: One, these reporters tend to treat national politics as a thrilling sporting event, caring much more about strategy and "victories" than policy and the impact of political decisions on actual Americans' lives. This is why Mike Allen can "analyze" a big political fight before it even happens, judging the Republican and Democratic arguments over a Supreme Court nomination as if it were a figure-skating competition, instead of a ... Supreme Court nomination.

Two, these guys worship power and consider themselves peers of the very serious and wise people in the D.C. political class. This is why Allen pointlessly extends anonymity to former Bush officials who send him sniping emails about the Obama administration, and then defends his decision to grant them anonymity by attacking liberals who criticized him.

And three, inasmuch as they're basically all well-off white dudes who live in nice neighborhoods and socialize with other well-off white guys, they're mostly moderate Republicans, even if they don't recognize that fact. And that is why, when Allen and VandeHei launched "The Politico Primary," a project designed solely to spur me to write something about how awful they are, their idea of unconventional outsider candidates included deficit hawk <strike>former Sen.</strike> Erskine Bowles, a randomly selected CEO and Condoleezza Rice.

HACKIEST 2011 MOMENT:
Let's say this entire "endorsement" of Erskine Bowles for pretend president, co-written with Jim VandeHei. "The most depressing reality of modern governance is this: The current system seems incapable of dealing with our debt addiction before it becomes a crippling crisis." When Allen published that, the American unemployment rate was 9 percent, the American prison population was the highest in the world, and the endless war on terror had just begun its 10th expensive, deadly year.

Correction: This piece formerly incorrectly referred to Erskine Bowles as a former senator, which he is not. I apologize for the error.
- - - - - - - - - -
(Read the introduction here. Read the 2010 Salon Hack 30 List here.)