Christoph Waltz, Kate Winslet and John C. Reilly also star in this crisp and clever adaptation of a hit play 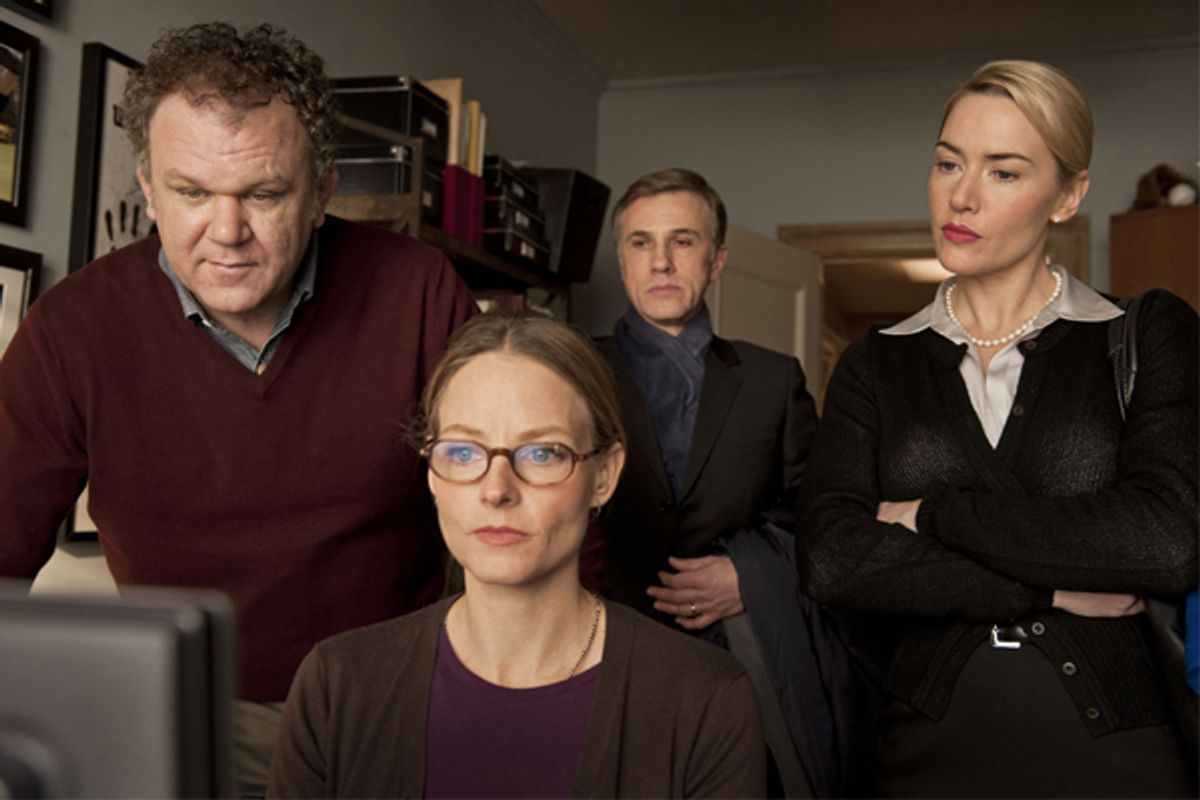 A brisk and bracing four-handed comedy about two Brooklyn, N.Y., bourgeois couples whose polite get-together to sort out a playground fight between their children descends into near-savagery, "Carnage" made a perfect opening-night entry for this year's New York Film Festival. Stars Jodie Foster and John C. Reilly got a standing ovation, and French playwright Yasmina Reza, who co-wrote the screenplay based on her worldwide stage hit "God of Carnage," took the mic for a few remarks. But where was the director? Too busy and/or too important to show up for his own movie in Alice Tully Hall?

I kid, I kid. For better or worse, Roman Polanski has once again become a more or less normal figure in the world of international cinema, as the NYFF's selection of "Carnage" made clear. His 2009 arrest in Switzerland ultimately came to nothing, after the Swiss authorities declined to extradite him to the United States to face sentencing for his 1978 rape conviction. Everyone at that Manhattan screening understood that he wouldn't be there, and indeed it seems highly unlikely that Polanski, who is now 78, will ever set foot on American soil again.

You don't need to be Sigmund Freud, however, to deduce that the master stylist who made "Rosemary's Baby" and "Chinatown" has unfinished business with America. Polanski's last film, released shortly after his Swiss arrest, was "The Ghost Writer," a clever, twisty thriller that used the North Sea coast of Germany (somewhat implausibly) to stand in for its Martha's Vineyard setting. Its story was based on a Robert Harris novel, but you couldn't help noticing that it was about a raffish international playboy forced into foreign exile by legal problems and a secret from his 1970s past.

"Carnage" contains no particular echoes of Polanski's biography, but it's definitely a work of Euro-American schizophrenia. It replicates the Brooklyn Heights or Cobble Hill apartment of Michael and Penelope Longstreet (Reilly and Foster, respectively) on a French studio set, complete with digital inserts of the Brooklyn waterfront seen through the windows. The film's funniest performance comes from long-faced Austrian actor Christoph Waltz, an Oscar winner for "Inglourious Basterds," who's utterly convincing as Alan Cowan, a scumbag lawyer who's managing some kind of P.R. crisis for a pharmaceutical client, via smartphone, even as he's making chitchat with the Longstreets. It's Alan who tells Reilly's Mike, after their perfunctory meeting over coffee has degenerated into booze, vomiting and brutality, "I believe in the god of carnage."

Alan's cellphone, along with Penny Longstreet's beloved art books, are among the totems destroyed by the god of carnage in this tightly structured comedy of manners, which is roughly one part "Who's Afraid of Virginia Woolf?" and one part Luis Buñuel's "Exterminating Angel." Although Reza's script (co-written with Polanski) stops short of full-on surrealism or science fiction, it begins to seem as if Alan and his prissy, uptight wife, Nancy (Kate Winslet), actually can't leave the Longstreets' apartment, or at least not until these couples' collision of class and sensibility reaches some resolution.
If Alan revels in privilege, power and lack of principle and Nancy is the model of upper-crust decorum -- at least until she violates it egregiously -- Mike and Penny are meant, on the surface, to seem more middle-class and "relatable." He's a contractor who made good, and she's a highly strung, oversensitive liberal type who is concerned about Tibet and the Sudan and has some vaguely arty career. It's one of Foster's best and funniest performances, even if her transformation, like everybody else's, is telegraphed in advance. Penny's supposed sensitivity and concern for others of course conceals a near-psychotic madness (as well as an unexpected appetite for alcohol early in the day).

Seeing these four actors launching Reza's zingers at each other at high speed is pretty much worth the price of admission all by itself, and one thing you always know about Polanski is that he won't waste your time. I don't actually think "Carnage" is an especially memorable film, but it's brilliantly shot and executed, traversing the bland, upper-middle spaces of the Longstreets' apartment with masterful economy. In a holiday season crammed with promiscuously wasteful two-hour-plus movies that seek to milk every possible emotion from you, this one keeps you laughing for 79 minutes and sends you home. But as you're pulling your coat back on, don't miss the tiny but important coda that happens behind the closing credits.

"Carnage" is now playing in New York and Los Angeles, with wider release to follow.