The writer succumbed to complications from esophageal cancer 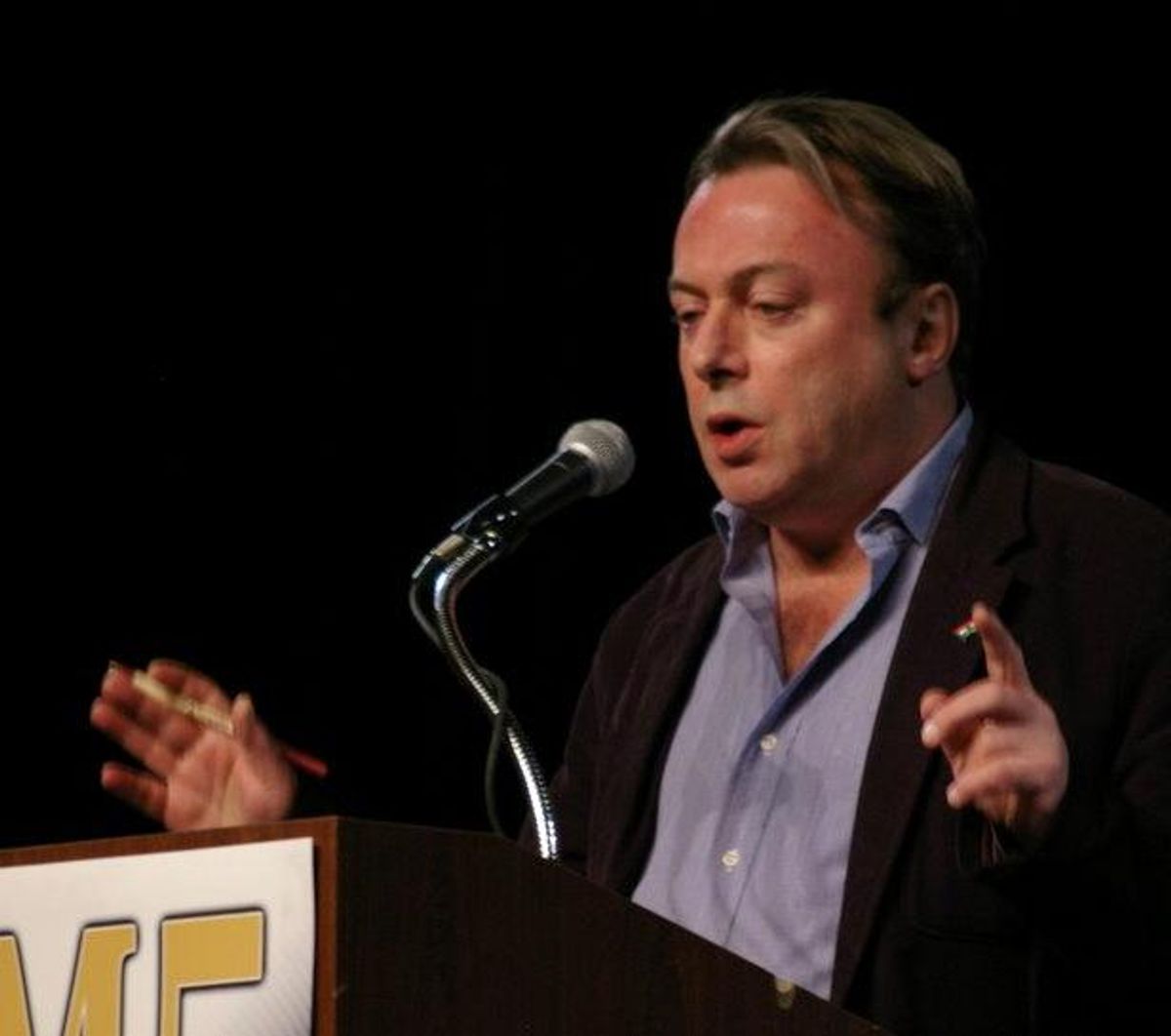 Cancer weakened, but did not soften Christopher Hitchens. He did not repent or forgive or ask for pity. As if granted diplomatic immunity, his mind's eye looked plainly upon the attack and counterattack of disease and treatments that robbed him of his hair, his stamina, his speaking voice and eventually his life.

"I love the imagery of struggle," he wrote about his illness in an August 2010 essay in Vanity Fair. "I sometimes wish I were suffering in a good cause, or risking my life for the good of others, instead of just being a gravely endangered patient."

Hitchens, a Washington, D.C.-based author, essayist and polemicist who waged verbal and occasional physical battle on behalf of causes left and right, died Thursday night at M.D. Anderson Cancer Center in Houston of pneumonia, a complication of his esophageal cancer, according to a statement from Vanity Fair magazine. He was 62.

"There will never be another like Christopher. A man of ferocious intellect, who was as vibrant on the page as he was at the bar," said Vanity Fair editor Graydon Carter. "Those who read him felt they knew him, and those who knew him were profoundly fortunate souls."

He had enjoyed his drink (enough to "to kill or stun the average mule") and cigarettes, until he announced in June 2010 that he was being treated for cancer of the esophagus.

He was a most engaged, prolific and public intellectual who wrote numerous books, was a frequent television commentator and a contributor to Vanity Fair, Slate and other publications. He became a popular author in 2007 thanks to "God is Not Great," a manifesto for atheists.

Long after his diagnosis, his columns and essays appeared regularly, savaging the royal family, reveling in the death of Osama bin Laden, or pondering the letters of poet Philip Larkin. He was intolerant of nonsense, including about his own health. In a piece which appeared in the January 2012 issue of Vanity Fair, he dismissed the old saying that what doesn't kill you makes you stronger.

"So far, I have decided to take whatever my disease can throw at me, and to stay combative even while taking the measure of my inevitable decline. I repeat, this is no more than what a healthy person has to do in slower motion," he wrote. "It is our common fate. In either case, though, one can dispense with facile maxims that don't live up to their apparent billing."

Eloquent and intemperate, bawdy and urbane, Hitchens was an acknowledged contrarian and contradiction — half-Christian, half-Jewish and fully non-believing; a native of England who settled in America; a former Trotskyite who backed the Iraq war and supported George W. Bush. But his passions remained constant and targets of his youth, from Henry Kissinger to Mother Teresa, remained hated.

He was a militant humanist who believed in pluralism and racial justice and freedom of speech, big cities and fine art and the willingness to stand the consequences. He was smacked in the rear by then-British Prime Minister Margaret Thatcher and beaten up in Beirut. He once submitted to waterboarding to prove that it was indeed torture.

Hitchens was a committed sensualist who abstained from clean living as if it were just another kind of church. In 2005, he would recall a trip to Aspen, Colo., and a brief encounter after stepping off a ski lift.

"I was met by immaculate specimens of young American womanhood, holding silver trays and flashing perfect dentition," he wrote. "What would I like? I thought a gin and tonic would meet the case. 'Sir, that would be inappropriate.' In what respect? 'At this altitude gin would be very much more toxic than at ground level.' In that case, I said, make it a double."

"We have known for a long time that Prince Charles' empty sails are so rigged as to be swelled by any passing waft or breeze of crankiness and cant," Hitchens wrote in Slate in 2010 after the heir to the British throne gave a speech criticizing Galileo for the scientist's focus on "the material aspect of reality."

"He fell for the fake anthropologist Laurens van der Post. He was bowled over by the charms of homeopathic medicine. He has been believably reported as saying that plants do better if you talk to them in a soothing and encouraging way. But this latest departure promotes him from an advocate of harmless nonsense to positively sinister nonsense."

Hitchens was born in Portsmouth, England, in 1949. His father, Eric, was a "purse-lipped" Navy veteran known as "The Commander"; his mother, Yvonne, a romantic who later kill herself during an extra-marital rendezvous in Greece. Young Christopher would have rather read a book. He was a "a mere weed and weakling and kick-bag" who discovered that "words could function as weapons" and so stockpiled them.

In college, Oxford, he made such longtime friends as authors Martin Amis and Ian McEwan and claimed to be nearby when visiting Rhodes scholar Bill Clinton did or did not inhale marijuana. Radicalized by the 1960s, Hitchens was often arrested at political rallies, was kicked out of Britain's Labour Party over his opposition to the Vietnam War and became a correspondent for the radical magazine International Socialiam. His reputation broadened in the 1970s through his writings for the New Statesman.

Wavy-haired and brooding and aflame with wit and righteous anger, he was a star of the left on paper and on camera, a popular television guest and a columnist for one of the world's oldest liberal publications, The Nation. In friendlier times, Vidal was quoted as citing Hitchens as a worthy heir to his satirical throne.

But Hitchens never could simply nod his head. He feuded with fellow Nation columnist Alexander Cockburn, broke with Vidal and angered freedom of choice supporters by stating that the child's life begins at conception. An essay for Vanity Fair was titled "Why Women Aren't Funny," and Hitchens wasn't kidding.

He had long been unhappy with the left's reluctance to confront enemies or friends. He would note his strong disappointment that Arthur Miller and other leading liberals shied from making public appearances on behalf of Rushdie after the Ayatollah Khomeini called for his death. He advocated intervention in Bosnia and the overthrow of Saddam Hussein in Iraq.

No Democrat angered him more than Clinton, whose presidency led to the bitter end of Hitchens' friendship with White House aide Sidney Blumenthal and other Clinton backers. As Hitchens wrote in his memoir, he found Clinton "hateful in his behavior to women, pathological as a liar, and deeply suspect when it came to money in politics."

He wrote the anti-Clinton book, "No One Left to Lie To," at a time when most liberals were supporting the president as he faced impeachment over his affair with Monica Lewinsky. Hitchens also loathed Hillary Rodham Clinton and switched his affiliation from independent to Democrat in 2008 just so he could vote against her in the presidential primary.

The terrorist attacks of Sept. 11, 2001, completed his exit. He fought with Vidal, Noam Chomsky and others who either suggested that U.S. foreign policy had helped caused the tragedy or that the Bush administration had advanced knowledge. He supported the Iraq war, quit The Nation, backed Bush for re-election in 2004 and repeatedly chastised those whom he believed worried unduly about the feelings of Muslims.

"It's not enough that faith claims to be the solution to all problems," he wrote in Slate in 2009 after a Danish newspaper apologized for publishing cartoons of the prophet Muhammad that led Muslim organizations to threaten legal action. "It is now demanded that such a preposterous claim be made immune from any inquiry, any critique, and any ridicule."

His essays were compiled in such books as "For the Sake of Argument" and "Prepared for the Worst." He also wrote short biographies/appreciations of Paine and Thomas Jefferson, a tribute to Orwell and "Letters to a Young Contrarian (Art of Mentoring)," in which he advised that "Only an open conflict of ideas and principles can produce any clarity." A collection of essays, "Arguably," came out in September 2011 and he was planning a "book-length meditation on malady and mortality." He appeared in a 2010 documentary about the topical singer Phil Ochs.

Survived by his second wife, author Carol Blue, and by his three children (Alexander, Sophia and Antonia), Hitchens had quotable ideas about posterity, clarified years ago when he saw himself referred to as "the late" Christopher Hitchens in print. For the May 2010 issue of Vanity Fair, before his illness, Hitchens submitted answers for the Proust Questionnaire, a probing and personal survey for which the famous have revealed everything from their favorite color to their greatest fear.

His vision of earthly bliss: "To be vindicated in my own lifetime."

His ideal way to die: "Fully conscious, and either fighting or reciting (or fooling around)."

Christopher Hitchens From The Wires