“There are clearly things that we’d like to see continued," he told clients 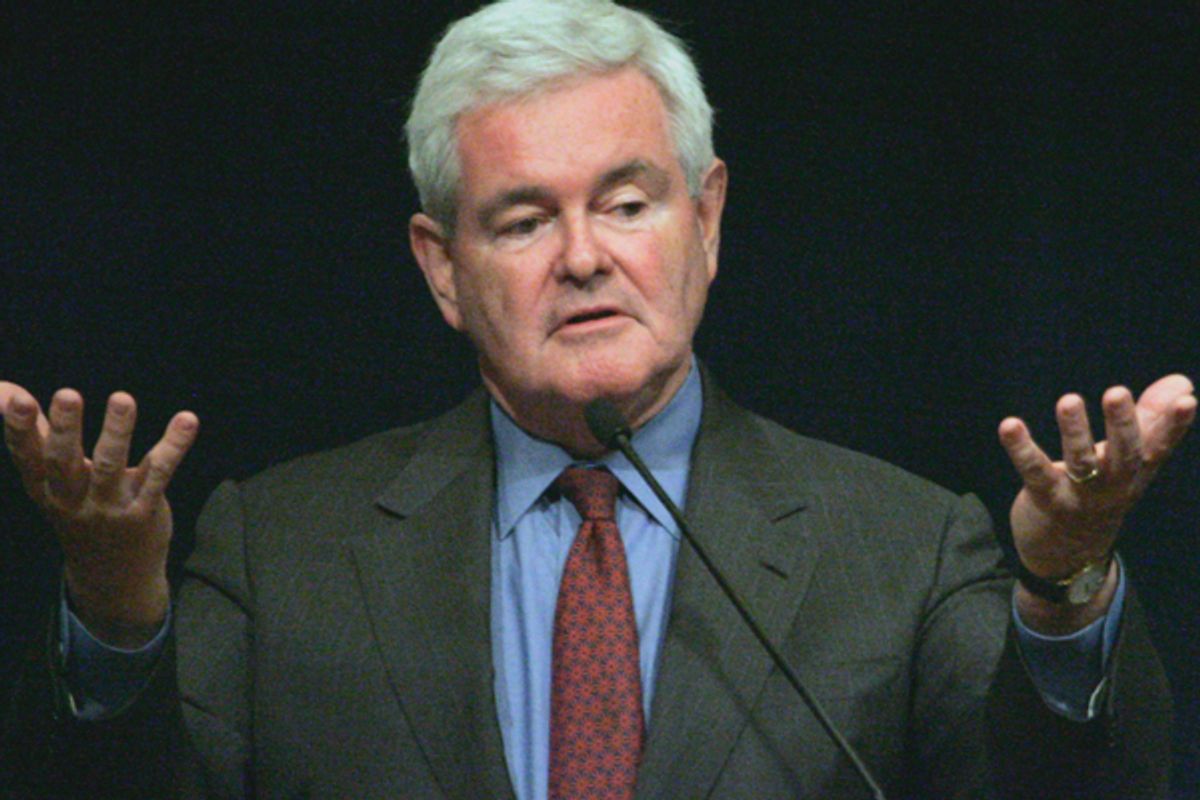 Since Newt Gingrich’s meteoric rise in the polls in the last two months, the Washington Post and New York Times have begun reporting on the Republican front-runner's dual role as a vocal critic of President Obama’s healthcare overhaul and as a paid consultant who explains the law’s benefits to corporate clients.

What hasn’t been reported yet are two conference calls in June and December 2010 in which Gingrich and his for-profit Center for Health Transformation touted "the good parts" of Obama's plan and offered advice about how clients might take advantage of a myriad of provisions of the Affordable Care Act.

In a February 2010 investigation into Gingrich’s healthcare business, I found that the Center's consultants had curried favor for drug companies, health insurers, health IT companies and hospitals, which paid Gingrich hefty retainer fees in exchange for access, advice and health-related earmarks.

The conference calls, co-sponsored by Siemens and NextGen Health Care, were central to Gingrich's effort. In her introductory remarks, co-host Charlene Underwood, government affairs vice president at Siemens,  described the calls as a “GPS” for firms seeking to “navigate what promises to be a circuitous route for health care reform.”

On both occasions, David Merritt, the vice president of Gingrich’s health firm, spoke first, explaining the law and the stages of implementation. Merritt praised many parts of the law, including spending on public wellness programs and incentives for employers to encourage people to focus on preventative care.

”I think the bill, and the provisions that have the most potential to truly transform the delivery side of care, would be in what’s called Title III where a lot of these demonstrations, a lot of these changes to reimbursements, will be found,” he said.

Gingrich also spoke on the calls reminding listeners that health reform could be shaped through committee hearings in 2011 and through the repeal-and-replace period in 2012, when (he suggested) a Republican president would take over. Touting his access to the Republican Party, Gingrich said he would be advising the congressional leaders as they took aim at the law.

On one call, Gingrich suggested that his clients — each paying as much as $200,000 in yearly retainer fees — would have a role in crafting policy.

“There are clearly things that we’d like to see continued and we’d like to see legislation passed almost concurrently that will sustain the good parts,” said Gingrich, explaining what would happen if the bill were to be repealed. Showing his savvy at generating business, he added that he would “love the help of all of our members in identifying” which parts of reform should remain law.

Gingrich’s private description of the Affordable Care Act differs dramatically from what he had said to voters publicly. In interviews over the last two years, he has described President Obama's program as a “centralized healthcare dictatorship” with provisions that “would, in effect, be death panels.” At Republican debates, he said that if elected, he would literally sign the repeal at his inaugural ceremony.

He stuck a different tone on the 2010 calls with his clients.

Gingrich applauded the “rapidly emerging standard of care” that would come with new Medicare reporting patterns prescribed by the law. “I think that those people who understand it and adapt to it, and learn how to use it faster will have a substantial net advantage,” Gingrich advised.

Gingrich has dismissed criticism about his influence peddling, saying he has done “no lobbying.” But according to his clients, he is part of their lobbying operation. In slides before the Gingrich webcast, Siemens listed the Center for Health Transformation and  “N. Gingrich” as part of its “Influencers” campaign, along with its team of D.C. lobbyists and trade association memberships.

In 2010, I asked  the former speaker about his refusal to register as a lobbyist. Although he met with lawmakers and helped craft industry-friendly legislation with Capitol Hill staff, he told me that his influence peddling did not technically constitute lobbying because it “benefit[ed] the country at large.”