A feisty Bachmann hits the former speaker on his Freddie Mac cash, and the renowned "national figure" gets huffy 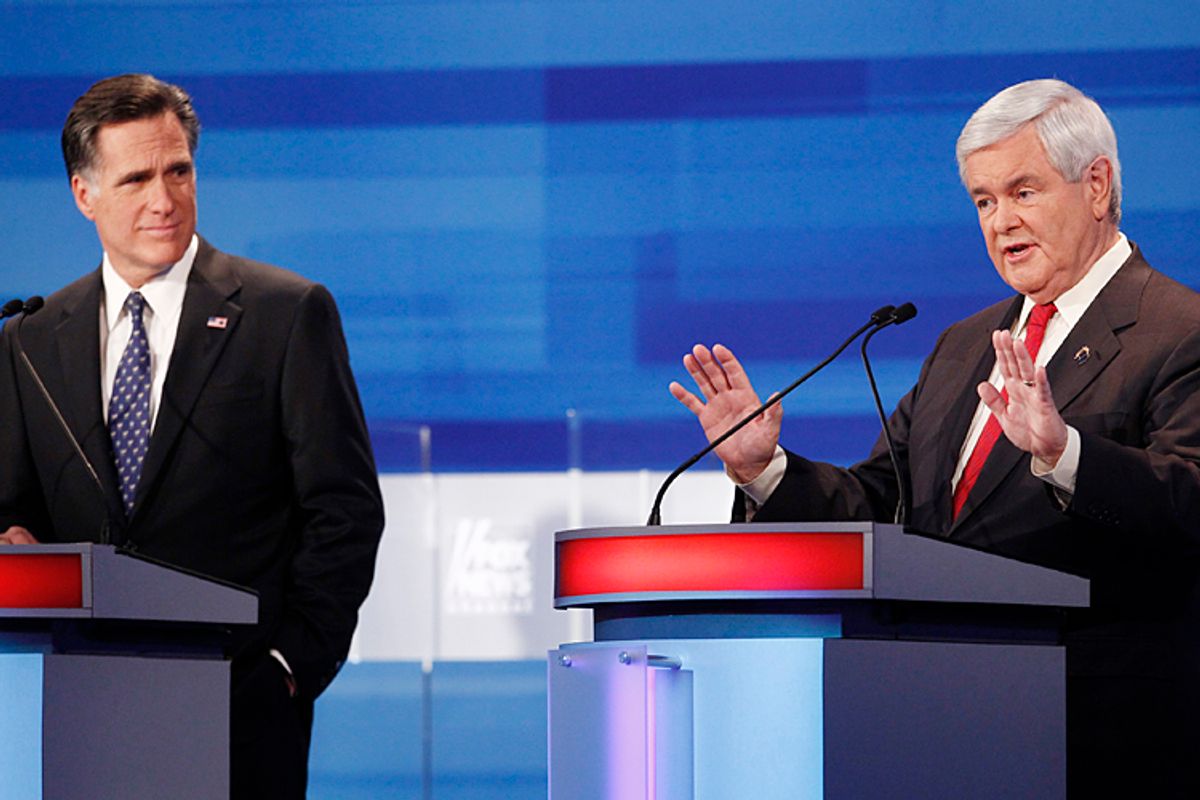 Bachmann hit Gingrich hard on taking at least $1.6 million from Freddie Mac, which she derided as "the epicenter of mortgage financial meltdown," the standard and false GOP line on what caused the financial collapse. "I was trying to see these two entities put in bankruptcy because they frankly need to go away, when the speaker had his hand out and he was taking $1.6 million to influence senior Republicans," Bachmann said.

That's when Gingrich got gassy, offended by the idea that he had his hand out. "I was a national figure who was doing just fine doing a whole variety of things, including writing bestselling books," he huffed. Meaning, I guess, that he had enough money that he didn't need to sell out for Freddie Mac cash. He made the same point when the scandal broke, reassuring voters he was making $60,000 a speech, and those arguments always sound like maybe he would sell out his principles if he got desperate enough. (They also sound like bragging.) We'll see how they sound to GOP voters.

The allegedly best-selling author also puffed himself up when Megyn Kelly hit him surprisingly hard for his attacks on an independent judiciary. Kelly noted that even Republican legal scholars had called Gingrich's court comments -- specifically his promise to pull "activist" judges into congressional hearings, and disband the 9th Circuit Court of Appeals for ruling that the phrase "one nation under God" in the Pledge of Allegiance was unconstitutional (the Supreme Court reversed the ruling) -- "dangerous, ridiculous, outrageous and irresponsible." Gingrich stuck to his guns, blithely insisting that too many judges are "grotesquely dictatorial," and that "actually, as a historian I may understand this better than lawyers." The noted historian also suggested that the phrase "one nation under God" was key to "American exceptionalism," even though it wasn't added to the Pledge until 1954.

At other times, though, Gingrich tried to play the sunny heir to Ronald Reagan, opening his remarks by wishing everyone a Merry Christmas (no Happy Holidays for you, Jews, Muslims and other non-Christians). He tried to focus his rivals and the audience on the task of defeating Barack Obama, that "Saul Alinsky radical, a campaigner in chief who doesn't do the job of president because he's too busy trying to run for reelection."

It was a somewhat better night for Mitt Romney, who wisely avoided his recent helter-skelter attacks on Gingrich. Romney once again played the role of the guy who's going to be fighting Obama next fall, no matter what happens in these amusing debates.

You're supposed to call out winners and losers in debate coverage, which I hate, and in this debate it was particularly hard. On Fox Neil Cavuto scored Bachmann and Rick Perry the winners, which is crazy. In fact, a lot of people praised Perry Thursday night, especially for comparing himself to maligned Christian Denver Broncos quarterback Tim Tebow. I'm sorry, but all the nods to Perry reeked of the soft bigotry of low expectations. He put together a noun, a verb and Tim Tebow? He didn't screw up, so he did good?

Bachmann earned some attention. She held her ground. She played for the female vote when she tweaked Gingrich for consistently belittling her and telling her she had her facts wrong. She can't climb very much, but she probably solidified her existing support. She also had to make her evangelical conservative base a little queasy about going for Gingrich.

I thought Jon Huntsman might go somewhere early on when he proclaimed, "We are getting screwed as Americans," and denounced banks that "are still too big to fail." But he was mainly preachy and ultimately came off as an also-ran. Likewise, every time a panelist asked Rick Santorum a question it felt like a mercy-query, a kind attempt to pretend he's still in the race.

Ron Paul was the star of the show. I know, he had and maybe still has hateful views on race (Jon Chait lays it out here) as well as on choice. He cited "the Austrian economists" for predicting the housing bubble again during the debate. But it's absolutely bracing to hear his foreign policy views, especially on the day Congress passed the National Defense Authorization Act, which also authorizes indefinite detention of civilians without trial, which President Obama has promised to sign.

As his rivals fought to be the most likely to declare war on Iran, Paul derided the conflict as "another Iraq coming, it's war propaganda going on," adding, "We ought to use a little bit of diplomacy once in awhile." He also insisted "to declare war on 1.2 billion Muslims and say all Muslims are the same, this is dangerous talk … Why do we have to bomb so many countries?" These are the views that make Republicans insist he can't go anywhere in the primaries; it would be fun to see him prove them wrong. Please do not mistake these remarks as an endorsement. Unlike Andrew Sullivan, I would not vote for Paul under any circumstances. But I hope his voice stays in this contest through Tampa.