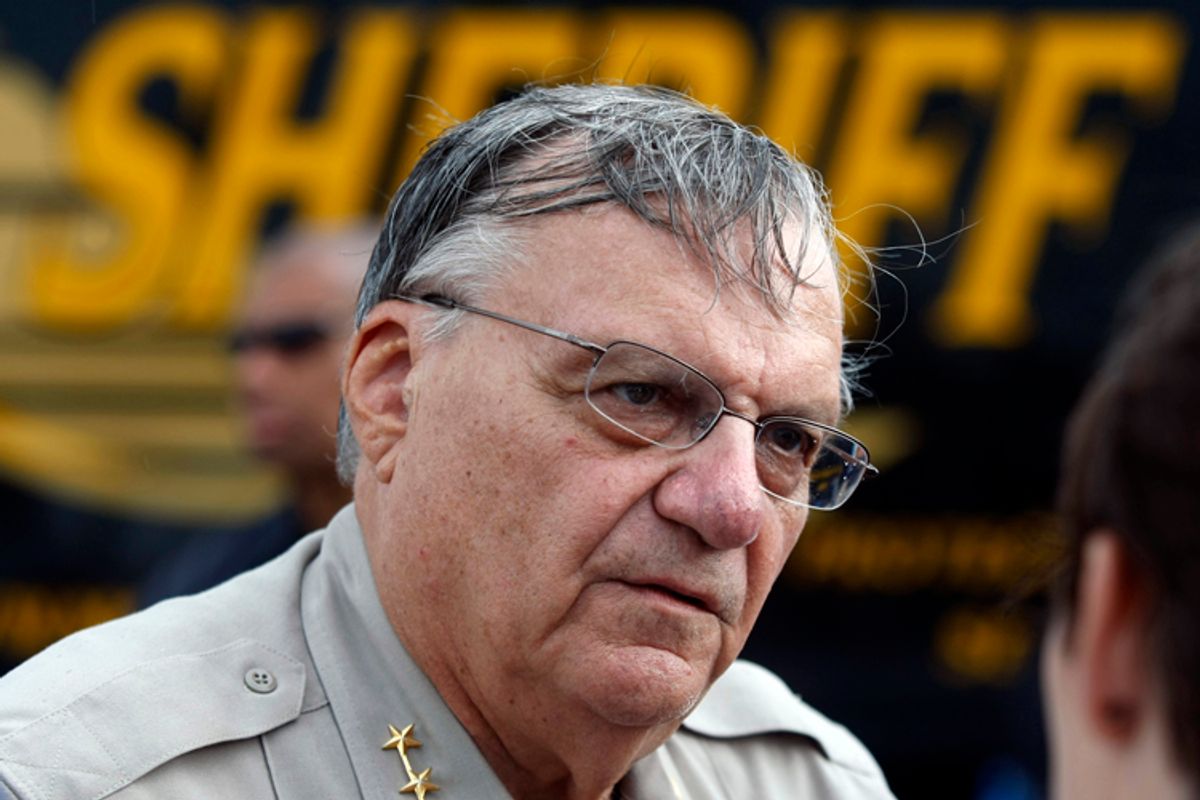 The clock struck at 1,095 days and 11 hours today for Sheriff Joe Arpaio in Maricopa County, Ariz. -- or, at least according to the ticking icon on the Phoenix New Times home page that had asked readers for years: "How long has Sheriff Joe been under investigation by the feds?"

That investigation culminated Thursday when the Civil Rights Division of the Department of Justice released its long-awaited report, which found a "chronic culture of disregard for basic legal and constitutional obligations" in Arpaio's office. Drawing from tens of thousands of documents and over 400 interviews with sheriff's department personnel, inmates and experts, the report documented "a widespread pattern or practice of law enforcement and jail activities that discriminate against Latinos,"  resulting in gross violations of  constitutional rights.

Assistant Attorney General Thomas Perez threw down the gauntlet for Arpaio at Thursday's press conference, giving him until Jan. 4, 2012,  to accept DOJ's measures to take "clear steps toward reaching an agreement with the Division to correct these violations in the next 60 days," or face a lawsuit.  Perez expressed DOJ's willingness "to roll up our sleeves and build a comprehensive blueprint for reform of MCSO," adding, "if the will exists" on Arpaio's end.

That's a big if. Now a real clock may be finally ticking for the countdown of the nearly 20-year reign of America's self-proclaimed "Toughest Sheriff."

One federal department is not even waiting: Within hours of the DOJ announcement, the Department of Homeland Security terminated Maricopa County's access to immigration status data under the federal Secure Communities program.

The announcement comes amid growing calls for Arpaio's resignation, in the aftermath of allegations that his department mishandled hundreds of sex crime reports in the Phoenix area township of El Mirage.

Rep. Raul Grijalva was the first to call for Arpaio to step down.

"Mr. Arpaio might love headline-grabbing crackdowns and theatrical media appearances," the Tucson Democrat said last week, "but when it comes to the everyday work of keeping people safe, he seems to have lost interest some time ago."

A few days later Rep. Ed Pastor, who represents Maricopa County in Congress, endorsed a call for Arpaio's resignation. So did nine state legislators. Even Cafe Con Leche Republicans, a national organization, released a statement this week that "Arpaio has disgraced his office and the Republican Party."

On Monday, religious leaders from 14 mainline denominations called on the attorney general to release its findings and take "immediate action to quell the growing human rights crisis in Arizona," a reference to Arpaio's law enforcement regime.

Citizens for a Better Arizona, a new group, which organized the successful recall of Tea Party leader and former state Senate president Russell Pearce in November, organized a major turnout at the Maricopa County board of supervisors meeting on Wednesday to call for Arpaio's resignation.

"This is a very important day for Maricopa County," County  Supervisor Mary Rose Wilcox, a critic of Arpaio, told supporters following the release of the report. "It's a day many of us have been awaiting. Let this be the end of Arpaio. Give us a better criminal justice system."

The 79-year-old sheriff has rarely failed to express disdain for federal oversight, especially from the Obama administration. Last week, Arpaio couldn't resist tweeting his glee about a dubious report in the Globe tabloid newspaper that his "Cold Case posse" investigation of President Obama's birth certificate had the first lady "in a panic."

Two years ago, after Department of Homeland Security chief Janet Napolitano had also announced her intentions to terminate the DHS cooperation with Arpaio's office, Sheriff Arpaio appeared on the Glenn Beck show and openly mocked federal authority.  Arpaio claimed that local and state laws allow him to target "some people who have an erratic, scared ... whatever ... if they have their speech, what they look like, if they look like they come from another country, we can take care of that situation."

The DOJ report concluded that Arpaio engaged in racial profiling.

"Our investigation uncovered substantial evidence of the kind identified by the Supreme Court in Arlington Heights," the report noted, "showing that Sheriff Arpaio has intentionally decided to implement his immigration program in a manner that discriminates against Latinos."

The report added a telling detail about Arpaio's effectiveness as a law enforcement officer. While his operations involved "the most egregious racial profiling in the United States," according to one expert, "enforcement actions rarely result in human smuggling arrests."

Another law enforcement officer last week levied a similar charge against Arpaio on the botched sex crimes investigations. Bill Louis, former assistant police chief in  El Mirage, wrote an Op-Ed in the Arizona Republic declaring that "Sheriff Joe Arpaio failed these victims. At this point there is little that can be done to undo the harm they have endured."

Not that criticism or outrage has ever moved Arpaio to veer from the style that has made him a hero to some conservatives: his high-profile immigrant sweeps, his order that prisoners had to wear pink underwear, or his reality TV exploits. Last spring, he simply shrugged off  calls for his resignation over allegations of his department's misuse of $100 million.

Will Arpaio comply with the Justice Department's demands?

"I've seen police chiefs, DAs and others who have been able to reform the system," Perez said at his press conference today.

But "reform" and "Arpaio" are two words rarely seen together.

(Update: At a Thursday afternoon press conference, a perturbed but defiant Sheriff Arpaio bristled at the Department of Homeland Security's revocation of its immigration data agreement with his department.  He warned such a move would allow undocumented criminal offenders to go undetected and be "dumped back onto a street near you."  Arpaio suggested that "President Obama might as well erect a sign on our border, [saying] 'Our home is your home.'" He did not  address any of the allegations of racial profiling and civil rights violations in the DOJ's report.

Nonetheless, Arpaio said that his office will cooperate with the Department of Justice, "to the best we can," and he thanked the President for injecting immigration into the national presidential debate. "But don't come here using me as a whipping boy for a national and international problem," he said, adding  "I will continue to enforce all of the laws."