What if they ended a war and nobody cared?

As the Iraq war concludes, Americans need to reflect on the horror it unleashed – and vow never to repeat it 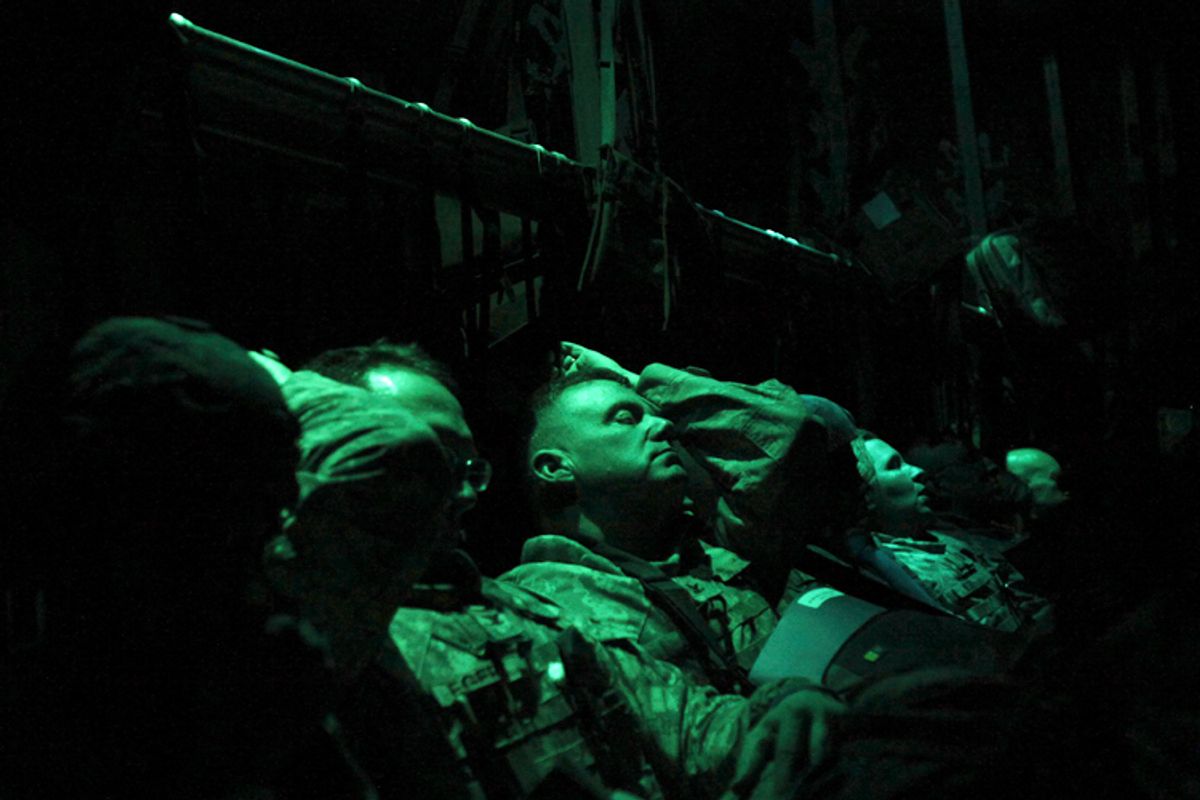 Members of the U.S. military rest on board an Air Force C-130 transport plane marking the end of their presence in Iraq after departing the Baghdad Diplomatic Support Center in Baghdad December 15, 2011. (Shannon Stapleton / Reuters)
--

Thursday, the Pentagon declared the Iraq War officially over. No one noticed.

With the possible exception of the Korean War, never in U.S. history has a major war concluded with so little fanfare. Every schoolchild knows that the Revolutionary War ended at Yorktown, when Gen. Cornwallis’ troops surrendered to George Washington’s Continental Army as a British band famously played “The World Turned Upside Down.” The encounter at Appomattox Court House between an immaculate Robert E. Lee and a mud-spattered Ulysses S. Grant has entered American legend.

V-E and V-J Days, commemorating the end of World War II, set off the most joyous, raucous and heartfelt celebrations in U.S. history. Even our defeats are marked in memory: The end of the Vietnam War will forever be associated with the image of desperate South Vietnamese clinging to the last helicopter as it lifted off from the American Embassy in Saigon.

But the Iraq War is different. Except for the families of the troops still serving there, Americans tuned it out long ago. Nobody gives a damn about the Iraq War.

To admit this, however, would violate a cornerstone of American mythology: our need to believe that we take our wars seriously. So, the opening sentence of a Dec. 15 New York Times story titled “Obama Observes End of Iraq War” refers to Iraq as “a war now indelibly imprinted on the national psyche.”

The phrase is lofty and elegiac. Unfortunately, it is completely false. Iraq has never been imprinted on the national psyche at all, let alone “indelibly.” It is ending as it began: with the country half asleep.

Just as it is the newspaper of record’s quasi-official role to make such hollow claims, so it is the official duty of America’s leaders. Hence the red-white-and-blue speech President Obama gave to returning war veterans at Fort Bragg. First, Obama made an obligatory attempt to infuse the end of the war with gravitas: “Now, we knew this day would come. We've known it for some time. But still, there is something profound about the end of a war that has lasted so long.”

Then, because it is not permissible for a president to acknowledge that wars are sometimes follies that end ignominiously, Obama went on to make the obligatory assertion that America won the Iraq War:

“[E]verything that American troops have done in Iraq -- all the fighting and all the dying, the bleeding and the building, and the training and the partnering -- all of it has led to this moment of success.”

Finally, having conferred this empty stamp of rhetorical approval, Obama whitewashed the motivations that actually led the Bush administration to start the war. In one of the most disgraceful sentences of his presidency, he said, “That's part of what makes us special as Americans. Unlike the old empires, we don't make these sacrifices for territory or for resources. We do it because it's right.”

If Obama had gone on to add, “They hate us for our freedom,” his impersonation of George W. Bush would have been complete.

Obama was right to assert that the end of the war is a profound moment, and to implicitly call for Americans to reflect on it. But the formulaic patriotic phrases he spouted will not inspire the kind of reflection that is needed. They are meaningless sound bites, the equivalent of the genuflections to “our brave men and women in uniform” made by announcers at football games.

To truly honor those brave men and women in uniform – and, even more because there are more of them -- the millions of Iraqis whose lives we destroyed, Americans need to look unflinchingly at this dreadful war.

Nobody wants to think about Iraq. It was a mistake, and no one wants to dwell on mistakes. There are times when national forgetting is healthy. But this is not one of them. We need to remember.

We need to remember that this war was launched under false pretenses by an administration that used fake evidence to push it through. Americans need to remember their own understandable fear after 9/11, and how they allowed cunning and manipulative ideologues to exploit it.

We need to remember that the institutions that should have resisted the war – Congress and the media -- completely failed to do so. Drugged by post-9/11 patriotism and groupthink, America’s representatives and their journalists abandoned their posts at the crucial hour.

We need to remember that the war was ruinously expensive. According to the Congressional Research Service, the United States has spent $823 billion through fiscal year 2013. Other analysts have estimated that its total cost, including veterans’ benefits and healthcare, will be $3 trillion.

We need to remember that the war was a total failure. According to the respected Center for Strategic and International Studies:

“[T]he US invasion now seems to be a de facto grand strategic failure in terms of its costs in dollars and blood, its post-conflict strategic outcome, and the value the US could have obtained from different uses of its political, military, and economic resources.”

The war destabilized the Middle East, led to widespread hatred of the U.S., and increased the threat of terrorism. Its real winner was Iran.

Above all, Americans need to remember that the Iraq War was a war. A war that shattered an entire country. A war that resulted in the death of between 150,000 and 400,000 Iraqis, left 600,000 orphans and 1.3 million internally displaced persons. Almost 4,500 Americans died, and thousands more were so seriously wounded that their lives will never be the same.

Americans need to remember that war is the worst thing in the world. War is hell. War is this blood-spattered little girl screaming because her parents have just been shot dead by mistake at a checkpoint. War represents the complete defeat of the human spirit. Wars must never be fought unless absolutely necessary. Never. Never.

We need to remember this. For America’s wars have become weightless. They are fought by other people’s children, or by mercenaries, or by functionaries sitting inside mountains pushing buttons that launch missiles. They are no longer real. The way the Iraq War is ending, not with a bang but a barely audible whimper, is the way we make war now. The line between war and peace has disappeared. We are in a permanent state of quasi-war.

This is spiritually deadening. It is also dangerous. The unbearable lightness of war allows ideologues and fools to kill casually in our national name, without anyone paying attention. Since Iraq never happened, another Iraq is possible. Those who cannot remember the past are condemned to repeat it.