Why did the Duggars photograph a stillborn baby?

A controversial image stirs debate -- and reveals our squeamishness about death 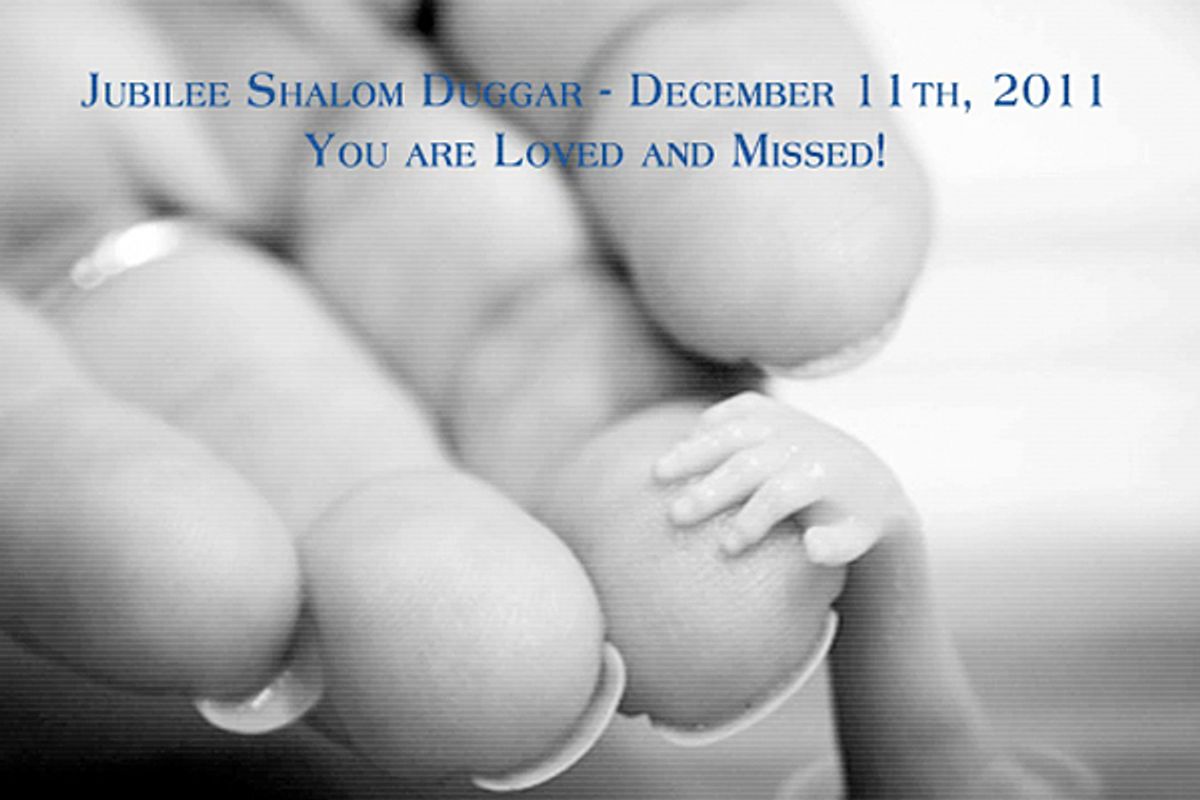 When the Duggar family announced last week that the baby Michelle was carrying had died in utero, it seemed the Internet couldn't have any less sympathy toward the fertile-to-a-fault brood. Commenters right here on Salon called them "an obscenity" who are "unfairly crowding the planet with [their] disgusting obsession" and "selfish, polluting choices," who were, in essence, "asking for it." Then the Duggars really ticked people off.

Making good on their promise to both name and hold a memorial for the baby, the Duggars had a service Wednesday for the child they named Jubilee Shalom Duggar. At it, they shared a card that read "There is no foot too small that it cannot leave an imprint on the world" that featured a photo of the baby's tiny feet, and another one of "Michelle holding Jubilee's hand."

It didn't take long for the images to get out – the family's young cousin Amy Duggar promptly tweeted "RIP precious Jubilee Shalom Duggar! Can't wait to meet you someday, thank you Lord for giving our family peace" along with a photo. The Duggars soon also ran the photo of Jubilee's hand on their family Web page. TMZ then went with the story, setting in motion a whole new level of Internet outrage at the family's "sick sick sick" and "disgusting"  behavior. But is it really that odd?

Grim though the notion of photographing a dead baby may be to some, it isn't so unusual. The Victorians were great ones for memorializing their dead, including taking images of dead babies in their cradles and in their mothers' arms. Today, organizations like Now I Lay Me Down to Sleep -- the one the Duggars used -- provide "remembrance photography" for families who've lost a baby "to honor and cherish their babies, and share the spirits of their lives." (NILMDTS does it free of charge.)

The idea that the dead are inherently creepy is far from universal. In some rural cultures, the death of a young child is cause for singing and dancing -- even passing around the body. In another era, you might wear the delicately woven hair of your dead relative in a ring on your finger. You might hang a coffin plate on the wall of your home. And you wouldn't think that was creepy or weird at all. Your beloved dead would be there, not just shunted off to the cemetery, but an acknowledged part of your life.

But today, death – even the death of someone who never got to be born – is not something we handle all that spectacularly in our culture. We hustle through grief; we remove reminders of the person who has gone; we ask people why they can't just "move on." But moving on doesn’t mean forgetting; it doesn't mean obliterating the presence of the deceased in a person's life.

We live in an age in which we can chronicle every moment of our lives via our omnipresent cameras, yet we shudder at the idea of taking – and sharing – the image of a lost baby. For families who've endured the pain of pregnancy loss, though, that image will forever be all they have. Sure, not everybody copes with a miscarriage by holding a memorial and passing around pictures, but who's to decide that grief has to be private? And who's to say that what is to some just a "sick" photo of a dead fetus isn't, to her parents, simply their child? And when it later becomes, as it inevitably must, easy for others to forget a life that never began and a hope that was quickly dashed, it's understandable why it would be so important for the parents to have something to make sure they don't. A picture. Something that proves that the child they desired was real. And that, just for a moment, they could hold her hand.