In the future, urban bikers go faster than cars 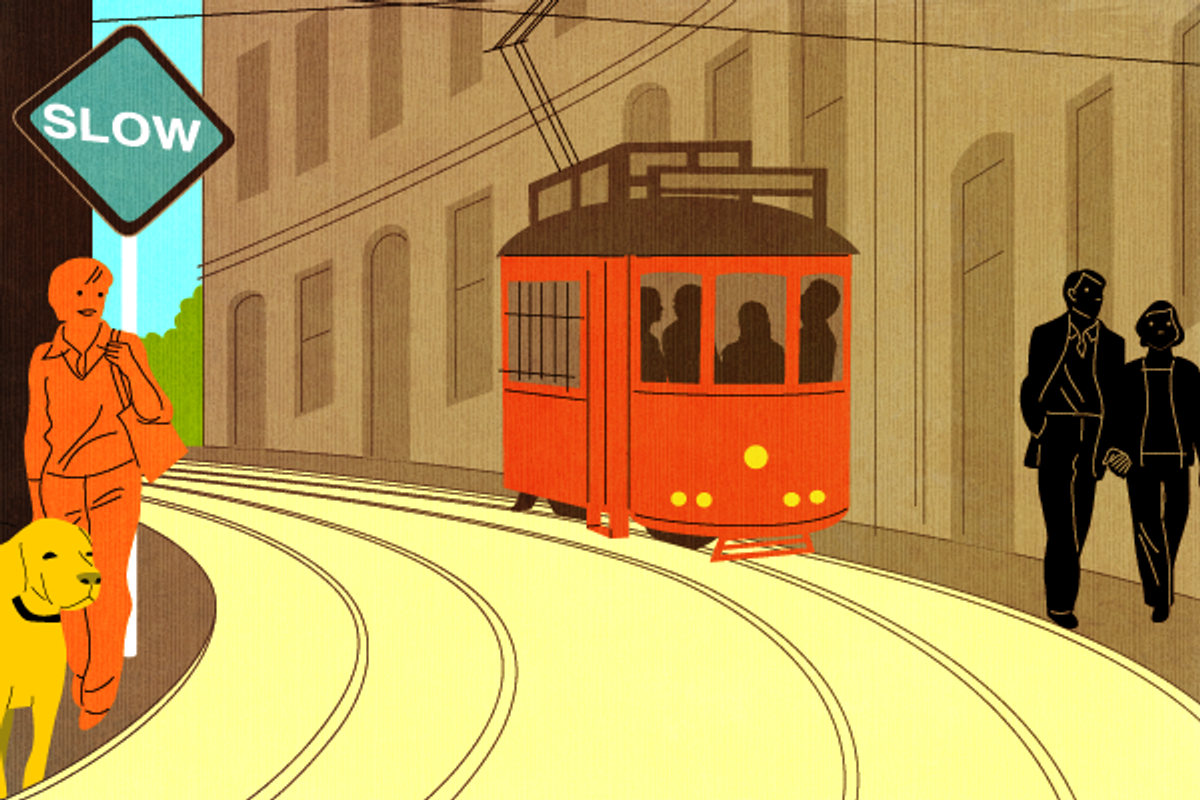 In Hollywood movies, the cities of the future have speeding monorails and flying cars, everyone careening toward their destination at a zillion miles per hour. (The future always looks surprisingly like "The Jetsons," which turns 50 next year.)

It makes for great CGI. But does it make for a great city? For generations, velocity has defined the urban experience: screeching subways, maniacal taxis, hustling crowds. Life in the fast lane. A New York minute is no minute at all. Even as our roads become clogged with traffic, we think of cities as most city-like when they move at a blur.

But look around (if you have a second) and you might notice that a lot of the new ideas seeping into cities are aimed not at making them faster, but slowing them down. The buzziest mode of transport now is a bicycle. Streetcars, a pokey throwback, are returning. Walkable neighborhoods, traffic-calming measures and "slow zones" are catching on, and freeways are being torn down and replaced with lower-speed boulevards. Even things like sit-down pedestrian plazas and pop-up cafes seem to indicate a desire to slacken the pace.

Slower cities have a lot to recommend them. "It's not just a road safety issue," says Rod King, the creator of "20's Plenty for Us," a movement to reduce London's speed limit to 20 miles per hour. "There are a lot of peripheral advantages to slowing down traffic." The advantages include increased biking because roads aren't so scary, the need for less infrastructure like speed bumps, and better air quality (racing from one traffic light to the next burns more fuel). Add in the public-safety benefits of slower cars (which are hard to overstate -- a few extra miles per hour can literally kill) and putting on the brakes starts to look like a no-brainer.

For this reason, speed may be the next battleground for urban streets. Advocates for safer, more walkable and bikable cities have spent the last decade agitating largely for infrastructure: bike lanes, pedestrian plazas, curb bulb-outs and other concrete improvements. Now, they say, the fight is turning to "enforcement" -- a demand for cities to crack down on dangerous driving.

Such efforts are already getting results. Seattle's mayor wants a 20 mile-per-hour speed limit on some city streets. Last month, Washington, D.C., was talking about 15. Advocates are starting to pressure police to ticket urban speeders. There's a growing awareness that cars could be a bigger urban menace than guns. (In a future column, we'll look at the push to get tough on drivers who kill pedestrians.)

But the slow-city movement isn't just about cars, nor is it always about safety. There's a growing sense that getting around -- even if it is slower -- can become a joy in itself.

The streetcar resurgence is a prime example. Streetcars are sometimes slower than the bus lines they replace (some of them aren't much faster than walking) and yet they're wildly popular. "There are two things people say about the streetcar" in Portland, Ore., says Michael Andersen, creator of the publication Portland Afoot. "One is, 'The streetcar is soooo sloooow.' And the other is, 'I loooove the streetcar.'"

The benefits and drawbacks of slow-mo transit have become a hot topic among planning geeks. In 2008, urbanist Patrick M. Condon asserted that slow streetcars would be better for Vancouver than faster rapid transit. His argument: "A high-speed system is best if the main intention is to move riders quickly from one side of the region to the other. Lower operational speeds are better if your intention is to best serve city districts with easy access within them ..." In other words, in dense urban neighborhoods, slower transit with more places to hop on and off can be more useful than a fast subway that makes a single stop.

It feels strange to equate slowing down with moving ahead, but in some ways, slowing down cities, much like the slow-food movement, is about shrugging off some of the 20th century's ill-conceived "innovations." A hundred years ago, city streets were a multi-use melting pot of cars, trolleys, horses, buggies, bicycles and pedestrians, all moving together in a low-speed symphony. It was easy to share the road because few things moved fast enough to be really dangerous. It wasn't until the 1930s and '40s that we started to see the streets as reserved for things that could go very fast, and pedestrians were expected to stick to the sidewalks. "Over time, without express agreement or even acknowledgment, the streets gradually became off-limits to the unwheeled," wrote the New York Times in a recent look back at mid-century urban street life.

Now, gradually, the pendulum appears to be swinging back toward slower streets, partly because walkable neighborhoods and urban density are in vogue again. A lazy streetcar, a strolling pedestrian or a languidly pedaling bicyclist are all signs that neighborhood life in that area is healthy and abundant. They indicate that you're somewhere that's packed with businesses, parks, playgrounds -- things that people want to stop and use -- and, in circular fashion, they encourage even more of that stuff to be built.

Not everyone buys it, of course. Condon's argument sparked a small riot on transit consultant Jarrett Walker's popular blog under a post titled, "Is Speed Obsolete?" Does slow transit really take cars off the road, or just pedestrians? How are streetcars better than buses? And for that matter, are bicycles even a slow way to get around? (Who could forget last summer's thrilling bicyclist-versus-JetBlue battle royale in Los Angeles?) The debate over slowing down cities remains very much up for grabs.

Maybe the bigger dilemma is that, too much of the time, our cities aren't going fast or slow. Chuck Marohn, executive director of the nonprofit Strong Towns, has argued that we continue to make the mistake of building 45 mile-per-hour cities -- places where we travel (usually by car) at a speed that's somewhere in the murky middle. This happens because we forget the difference between a street, where vibrant, valuable, low-speed development should flourish, and a road, which should quickly take us from one place to another. Instead, Marohn says, we've ended up with a bunch of "stroads" -- four-lane arteries, lined with mini malls and parking lots, that are too fast to encourage good development, and too slow to efficiently move us in and out.

But there are signs everywhere that that might be changing, and that the value of slower streets is hitting home. Merchants who originally worried that traffic-calming measures would hurt their bottom lines are now realizing the benefits. Pedestrian plazas and pop-up cafes have proven extremely popular as amenities that encourage people to pause, socialize, and do a little texting. Even New York's slow zones are a hit. It all goes to show that a great city doesn't need to move at the speed of Hollywood to have its own kinetic energy. Life in the slow lane can be just as sweet.