He mentions the Christian savior often but usually abuses his message 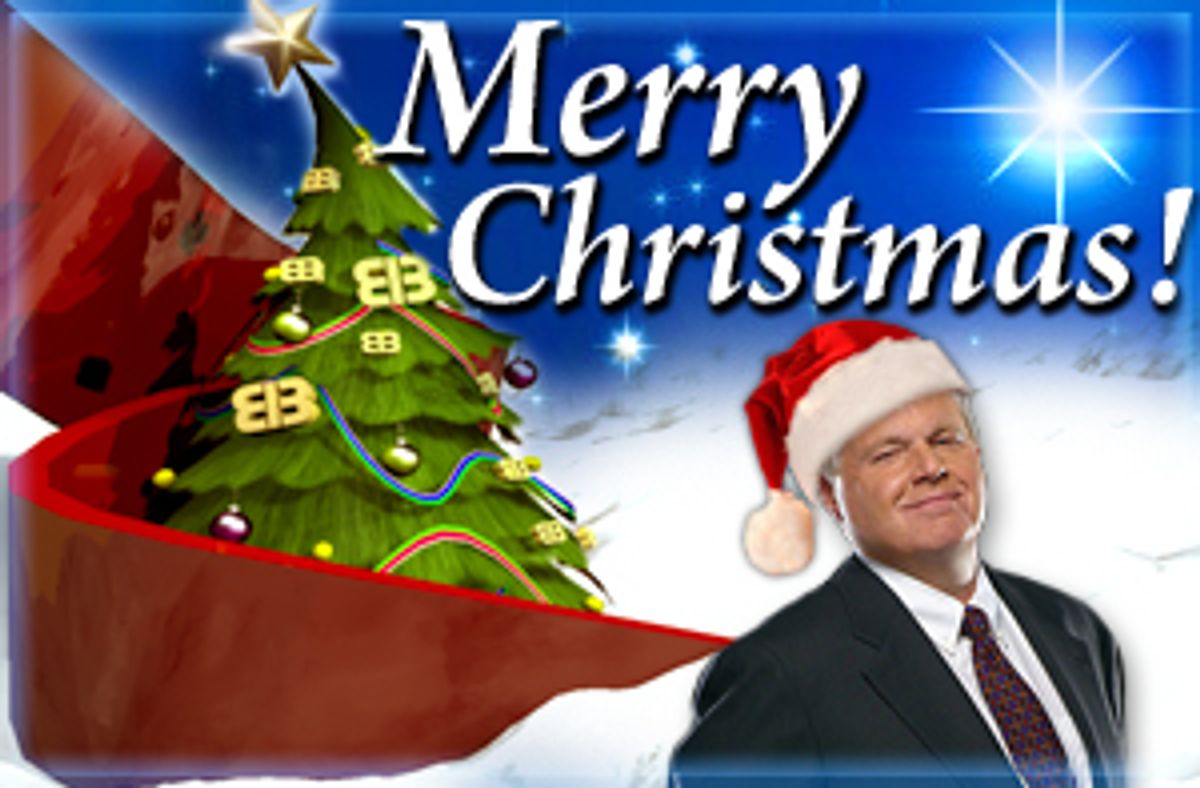 America’s most popular talk show host has spoken the word "Jesus" approximately 2,420 times during his last 20 years on the air. He has mentioned "Christ" 2,130 times and the "Messiah" 4,038 times, according to one blogger with a whole lot of time on his hands. The purpose of his exhaustive research was to dispel doubts about Limbaugh’s Christian credentials, which have been under fire lately by certain evangelicals who cite the fact that Rush -- according to his own brother, David -- was never “born again.”

This is a hot topic for fundamentalists. “Is Rush a real Christian?” is the most frequently Googled question about the controversial radio personality.

So I decided to do a little research of my own, which I hoped might shed some light on the impending holiday season. Do Rush Limbaugh and the Prince of Peace really see eye to eye? Often the answer is no.

Jesus said, “You have heard it said: 'Eye for eye and tooth for tooth.' But I say to you, Offer the wicked man no resistance. If anyone strikes you on the right cheek, turn the other also." (Matthew 5:38-42)

Rush -- an opponent of gun control, a supporter of capital punishment and a big fan of American wars abroad and militarism in general -- quipped on one occasion, "There is only one way to get rid of nuclear weapons ... use them."

Jesus said, “Blessed are the peacemakers: for they shall be called the children of God.” (Matthew 5:5-9) Rush excoriated president Obama for sending in peacekeepers to rein in "The Lord's Resistance Army,” who he claimed were “Christians fighting the Muslims in Sudan.” Well not exactly. The Lord's Resistance Army is actually a gang of Hitler-esque thugs in Uganda who murdered, pillaged and raped untold thousands. But let’s not quibble over facts. Christians are Christians, right?

When a mob was preparing to stone a woman who was accused of adultery, Jesus told them, “He that is without sin among you, let him cast the first stone at her.” (John 8:7) When 15-year-old gay teen Lawrence King was murdered in class by a homophobic fellow student, Rush blasted the assistant principal of the school for “promoting a gay agenda.”

Jesus said “Judge not and you will not be judged.” (Luke 6:37) Rush, by contrast, has few compunctions on the judgment front. He calls environmentalists “"long-haired maggot-infested ... wackos." Liberals, he says are  “dittoheads” and “retards.” He compared President Obama to Hitler. He labeled American military personnel who support withdrawal from Iraq “phony soldiers."

Rush, on the other hand, breezily dismissed the torture of prisoners at Abu Ghraib saying, "This is no different than what happens at the Skull and Bones initiation ... I'm talking about people having a good time, these people, you ever heard of emotional release?"

Jesus said, “The man who has two tunics is to share with him who has none; and he who has food is to do likewise.” (Luke 3:11)

Jesus, the tenderhearted master of empathy and compassion, told his disciples to tend the sick and feed the poor. He said, "This is my commandment, that you love one another as I have loved you." (John 15:12)

Rush, by contrast, responded to an ad in which the actor Michael J. Fox advocated funding for stem-cell research by fuming that Fox "was  exaggerating the effects of the disease. He's moving all around and shaking and it's purely an act ... This is really shameless of Michael J. Fox. Either he didn't take his medication or he's acting."

“Blessed are the meek, for they shall inherit the earth," said Jesus extolling the virtue of humility. (Matthew 5:5) “I have talent on loan from God,” boasted Rush.

OK, nobody expects Rush Limbaugh -- or any mere mortal for that matter -- to fully live up to Christ’s moral code. But that’s not the point. The point is that someone who invokes Jesus' name in practically every broadcast might know a little more about what the founder of Christianity actually taught. Limbaugh is free to spout any bigoted, mean-spirited, vitriolic and unenlightened opinions that he likes. But with the Christmas holiday coming, please do us all a favor and leave Jesus out of it.