GOP voters sour on Gingrich, predictably, but most still aren\'t sure Obama was born here. Really 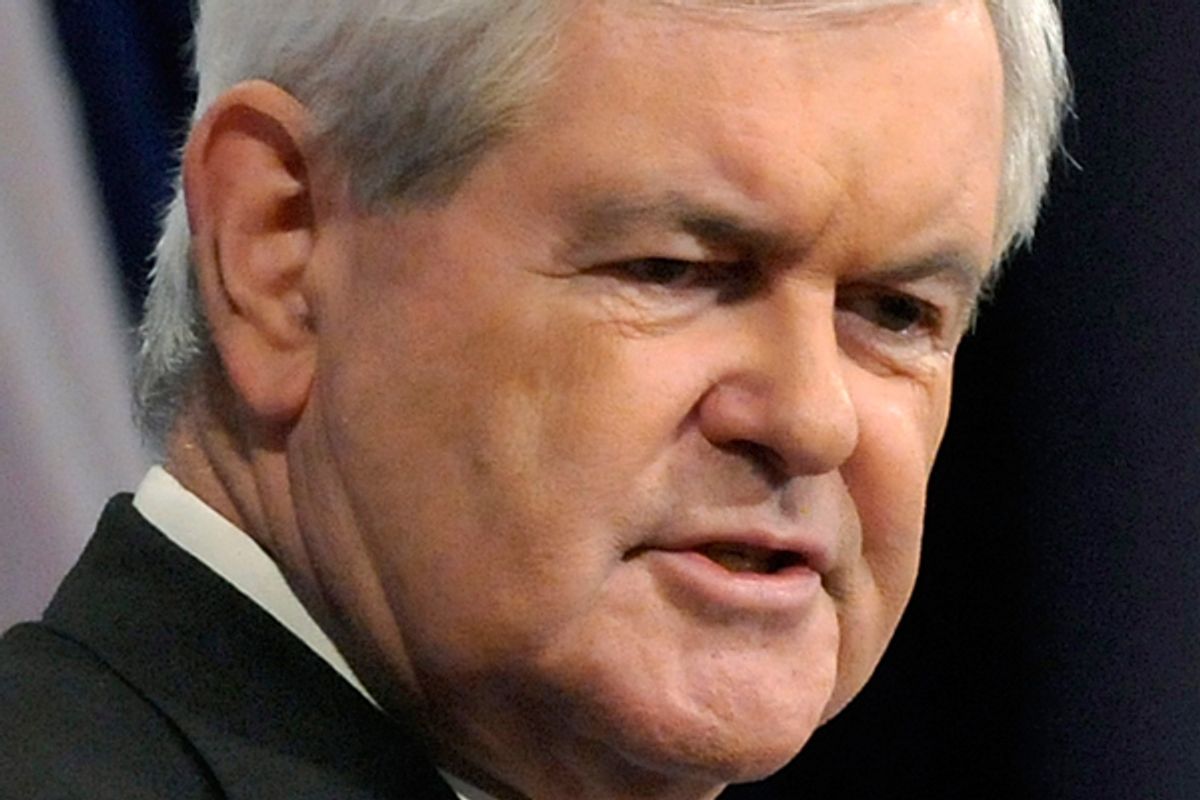 I take pride in a reality-based approach to politics, so I've continued to argue that Newt Gingrich will flame out just like every other not-Mitt Romney GOP presidential candidate has – even though Gingrich hung on longer than I thought he would. But gravity, karma and negative ads are pulling Gingrich and all of his baggage down, in Iowa and nationally.

The air is leaking fast from his Iowa campaign, where Public Policy Polling finds him down 8 points, from 22 to 14 percent, in just a week. As in other polls, Ron Paul is surging in the nation's first caucus, now grabbing 23 percent. But Romney is climbing too, jumping from 16 to 20 percent. A Ron Paul win isn't a disaster for Gingrich (and certainly not for Romney) but a Paul win in which Gingrich comes in third or fourth is not good.

And while national polls aren't that meaningful right now, since the nomination process is so state-based and idiosyncratic, Gingrich's national standing has plummeted, according to Gallup. He jumped to a 15-point lead over Romney early in December; now they're statistically tied, with 26 percent for Gingrich vs. 24 percent for Romney.

Gingrich is sinking some in other early states, too. At the end of October he stood at 5 percent in New Hampshire according to the CNN/Time poll, with Romney leading by 27 points, but in the same poll at the end of November, Gingrich had 26 percent of the vote and Romney's lead had been cut to 9 points. Other polls show Gingrich dropping in December, though, from the high 20s; the RCP average now has him at 20 percent, and Romney up 11.3 points. Nate Silver at the New York Times now gives Romney a 75 percent chance of winning New Hampshire, with Gingrich third, behind Paul. Gingrich is even slipping in South Carolina, though he's still ahead. Insider Advantage, which had him at 38 percent three weeks ago, now shows him at 31 percent.

The latest PPP Iowa poll has lots of bad news for Gingrich, and good news for Romney, in its cross-tabs. One surprising fact noted by Steve Kornacki is that Romney is the other candidates' supporters' second choice, which matters if any of them tank or (unlikely) drop out.  Romney also beats Gingrich when asked who has strong principles – and who doesn't – as well as on favorable vs. unfavorable opinion questions.

The most disturbing PPP finding was the fact that 52 percent of the GOP voters surveyed either don't believe Barack Obama was born in the United States (31 percent) or say they aren't sure (21 percent). But the right-wing demagoguery of Gingrich is losing its allure even in this birther-sympathizing electorate.

As Gingrich grows more desperate, he gets crazier, this week ratcheting up his unconstitutional crusade against the judiciary branch of government, which even conservative legal scholars (and Bush Attorneys General Michael Mukasey and Alberto Gonzales) have criticized. Gingrich already said he'd haul judges he disagrees with in front of Congress for hearings, and if they won't go, he'll send federal marshals to take them forcibly. These aren't just hotheaded, in-the-moment sound bites; he took to his Web site to explain his thoughts in depth:

While abolishing judgeships and lower federal courts is a blunt tool and one whose use is warranted only in the most extreme of circumstances … it is one of many possibilities to check and balance the judiciary. Other constitutional options, including impeachment, are better suited…In very rare circumstances, the executive branch might choose to ignore a court decision.

A decision in favor of gay marriage might be one such "rare circumstance," according to Gingrich. "The Constitution of the United States has absolutely nothing to say about a constitutional right to same-sex marriage. Were the federal courts to recognize such a right, it would be completely without constitutional basis," he wrote.

Gingrich announced Monday that he's going on a marathon Iowa bus tour in the campaign's final days, which reminded me of the desperate Democrat who did that in 2008: John Edwards. His flailing is clearly helping Romney, making the flip-flopping former Massachusetts governor seem more principled and more likable in Iowa at least. The forces of gravity, as well as human decency, that kicked in with the Iowa and New Hampshire electorates are likely to spread when the campaign gets to later states like Florida, where Gingrich is already sagging.

I'll be talking about the latest developments in the GOP field on MSNBC's "The Ed Show" tonight at 8 p.m. ET.