Panetta: Iraq War was "worth it" 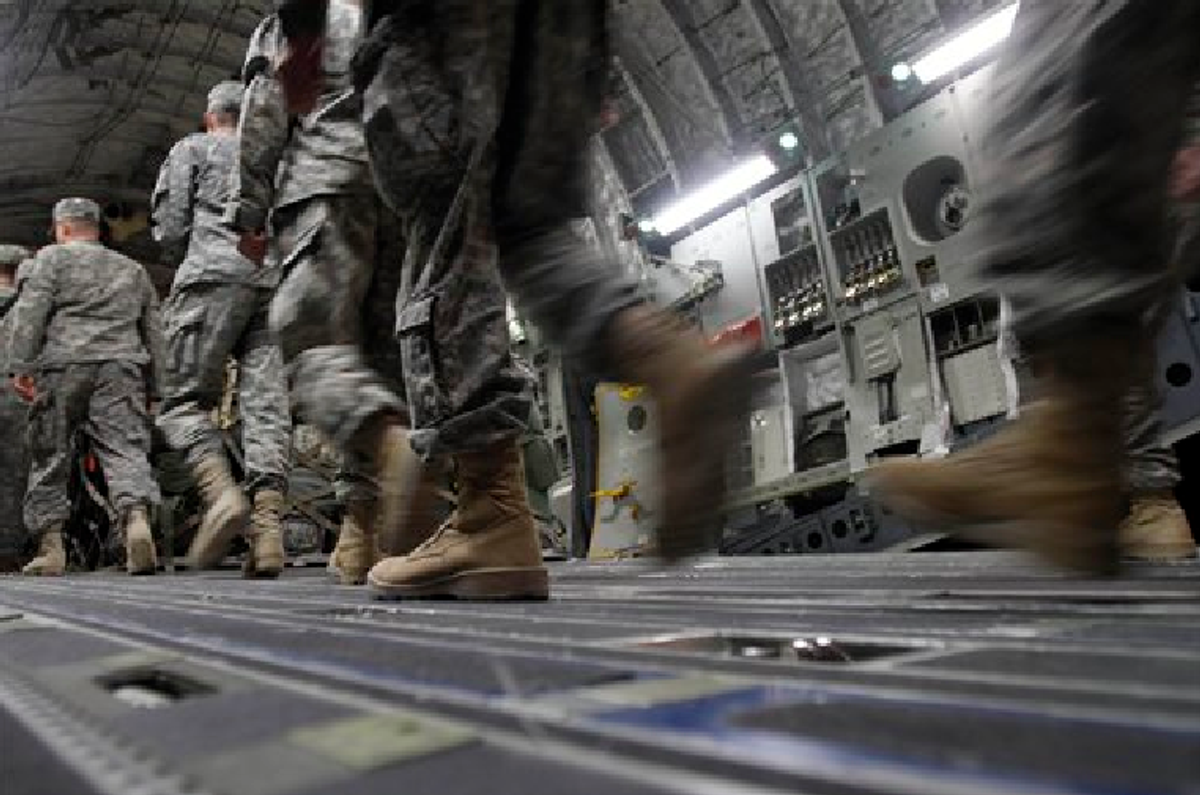 U.S. Army soldiers from the 25th Infantry Division board a plane at Camp Adder moments before the unit leaves Iraq. (AP Photo/Maya Alleruzzo)
--

A day after visiting Iraq, Defense Secretary Leon Panetta spoke to reporters in Turkey on Saturday and said this, according to the DoD's own site:

"There is no question that the United States was divided going into that war," he said. "But I think the United States is united coming out of that war. We all recognize the tremendous price that has been paid in lives, in blood. And yet I think we also recognize that those lives were not lost in vain. . . .

"As difficult as [the Iraq war] was," and the cost in both American and Iraqi lives, "I think the price has been worth it, to establish a stable government in a very important region of the world," he added.

The "price" that Panetta believes is "worth it" includes dead civilians in the hundreds of thousands, countless more maimed, millions of Iraqis internally and externally displaced (a huge number who remain so), tens of thousands of American soldiers killed and/or injured, and at least $1 trillion spent, contributing to "austerity" so severe that Panetta himself has been urging cuts to core social programs. That is above and beyond future Saddam-like oppression, tyranny and sectarian strife under the Malaki regime. As the always-insightful military historian and former Army Colonel Andrew Bacevich put it this week: "Recalling that Saddam's weapons of mass destruction and alleged ties to al-Qaeda both turned out to be all but non-existent, a Churchillian verdict on the war might read thusly: Seldom in the course of human history have so many sacrificed so dearly to achieve so little."

Panetta's statement is highly reminiscent of the 1996 2001 incident in which Secretary of State Madeleine Albright was asked by Leslie Stahl on 60 Minutes about the sanctions regime imposed on Iraq: "We have heard that a half million children have died. I mean, that's more children than died in Hiroshima. And, you know, is the price worth it?" Albright replied: "I think this is a very hard choice, but the price--we think the price is worth it." They're similar not just because the words are virtually identical, though they are, but also because they spring from the same rotted imperial mentality. Regarding Panetta's declaration that the Iraq War was "worth it," I have three questions:

(1) If the attack on Iraq was "worth it" -- meaning the benefits outweighed the costs -- then doesn't that mean that Democrats (including President Obama) owe George Bush, Dick Cheney and friends a sincere apology for all those attacks they voiced over the years about the war? How can the Iraq War simultaneously have been a "stupid war" (President Obama's 2002 description) and one where "the price has been worth it" (Panetta)?

(2) Consider how often U.S. officials announce to the Muslim world, either in essence or, as here, explicitly: yes, our actions extinguished the lives of hundreds of thousands of your innocent men, women and children, but we think it's worth it. What is the inevitable outcome of that message being sent over and over?

(3) If the highest levels of the U.S. government believe the Iraq War was "worth it," then doesn't it stand to reason that more of the same should be done? That is the point Bacevich raised in identifying what may end up being the most destructive cost of all from the Iraq War:

The disastrous legacy of the Iraq War extends beyond treasure squandered and lives lost or shattered. Central to that legacy has been Washington's decisive and seemingly irrevocable abandonment of any semblance of self-restraint regarding the use of violence as an instrument of statecraft. With all remaining prudential, normative, and constitutional barriers to the use of force having now been set aside, war has become a normal condition, something that the great majority of Americans accept without complaint. War is U.S.

One senses that this was what the likes of [Vice President Dick] Cheney, [Secretary of Defense Donald] Rumsfeld, and [Deputy Secretary of Defense Paul] Wolfowitz (urged on by militarists cheering from the sidelines and with George W. Bush serving as their enabler) intended all along. By leaving intact and even enlarging the policies that his predecessor had inaugurated, President Barack Obama has handed these militarists an unearned victory. As they drag themselves from one "overseas contingency operation" to the next, American soldiers must reckon with the consequences. So too will the somnolent American people be obliged to do, perhaps sooner than they think.

It's reasonable to argue (even though it's ultimately unpersuasive) that Panetta, as Pentagon chief, cannot or should not be as aggressively critical of the war which U.S. soldiers fought as other officials might be. But he could easily discharge that duty without offering a ringing, bottom-line endorsement of the war, which is exactly what is achieved with "we think the price is worth it." If that is the view of the top-level Obama officials -- who, it must be remembered, did everything in their power to extend the Iraq war beyond the 2011 deadline negotiated by the Bush administration -- that is a seriously disturbing and likely consequential revelation.

UPDATE: I was on Democracy Now this morning discussing Bradley Manning, along with the bill President Obama will sign to codify indefinite detention; both segments can be viewed at the DN site, respectively: here and here. Prior to the beginning of my segment, I listened to government informant Adrian Lamo provide one incoherent, dishonest answer after the next to the excellent questions posed by DN host Amy Goodman (those interested can view that segment here), so -- I confess -- I was a bit irritated (to put that mildly) once my segment began from having spent the prior 10 minutes listening to the individual responsible for Manning's facing life imprisonment and possibly a death sentence, spouting one inanity after the next.