Few will miss the North Korean despot -- except perhaps writers on "30 Rock," "The Daily Show" and "Team America 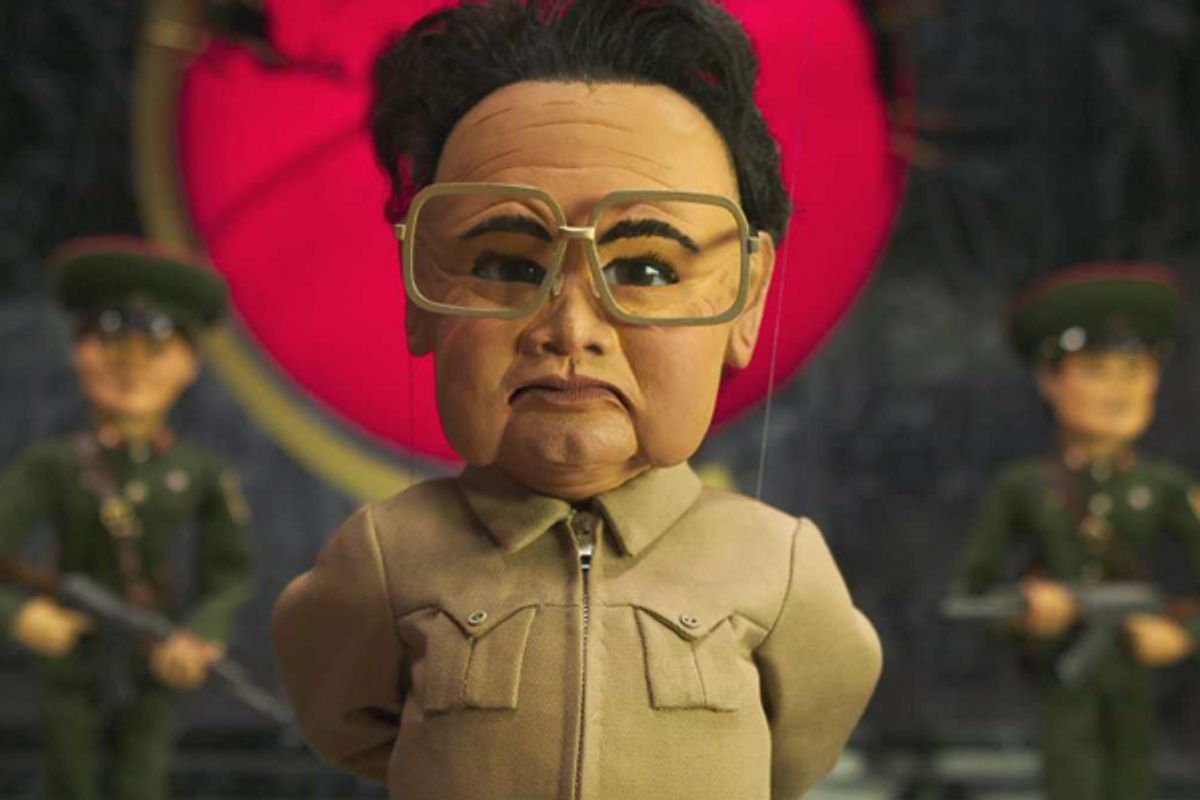 Kim Jong Il was one of the most chilling figures of the modern era, with a harrowing human rights record. But of the tyrannical madmen who have died this year, he was also the one who made the oddest pop culture splash. Moammar Gadhafi's ability to rock a golden muumuu will never be paralleled. But from "30 Rock" to "The Daily Show," the departed North Korean leader will be missed. Was it those rock star shades? His fondness for olive green? The way he really knew how to throw a tank-rolling, goose-stepping military parade? In a word, yes.

Sure, Saddam Hussein got to play a role in Trey Parker and Matt Stone's 1999 opus "South Park: Bigger, Longer & Uncut." But it was Mr. Jong Il who really stole the show in Parker and Stone's subsequent puppet masterpiece "Team America: World Police." Kim's not just a homicidal maniac in a big house -- he's a guy who really, really loves to put on a big show. He's also a man who can't quite pronounce "inevitable," who struggles with the isolation of success, and who, it turns out, is actually a bug from outer space. Now that's a villain!

What makes the puppet Kim Jong Il such a classic comedic character is that he's not all that far from the Western perception of the real guy. This, after all, was a man who loved the movies so much he wrote a book on "The Art of Cinema." He loved them so much he owned thousands of DVDs – "Rambo" and Elizabeth Taylor were allegedly among his faves. He loved them so much that early in his career, he had South Korean filmmaker Shin Sang-ok and his South Korean film director Shin Sang-ok and his actress ex-wife Choi Eun-hee kidnapped to forge the North Korean film industry. The results included the somewhat less subtle than "Triumph of the Will"-rampaging monster masterpiece "Pulgasari."

Jong Il not only forcibly created entertainment, he inspired it. He became part of a pivotal plotline on "30 Rock" last season, when Jack Donaghy's wife, Avery Jessup (Elizabeth Banks), wound up abducted by the internationally fearsome "convenience store owner." It was a crazy sitcom twist – based on the very real imprisonment (and subsequent release) of Current TV's Euna Lee and Laura Ling in 2009.

Even as he retreated from the spotlight throughout his later years, Kim Jong Il became all the more dominant a force on the Internet. Is there a more elegantly straightforward, satisfyingly amusing Tumblr than Kim Jong-il Looking at Things? There is not. Have you ever seen photos of Stalin smiling merrily at great wheels of cheese? I rest my case.

He was a complicated man. A man who apparently had a penchant for water slides and could golf a 38-under-par round. Would you tell him he couldn't take that mulligan? What can you say of a person who has been played by both Margaret Cho and Gilbert Gottfried? A man who's provided more material for "The Daily Show" than anyone not named Jim Cramer? A guy like that doesn't come along in too many lifetimes. Now that the leader is dead, his legacy on the evening news will no doubt be harrowing. But as Elizabeth Banks tweeted Monday, we are indeed at a pivotal moment in history" -- one that leaves joke writers and Tumblr bloggers just a little "sad and ronery."