Culture, coercion and fear for the future explain the extreme displays of grief over Kim Jong Il's death 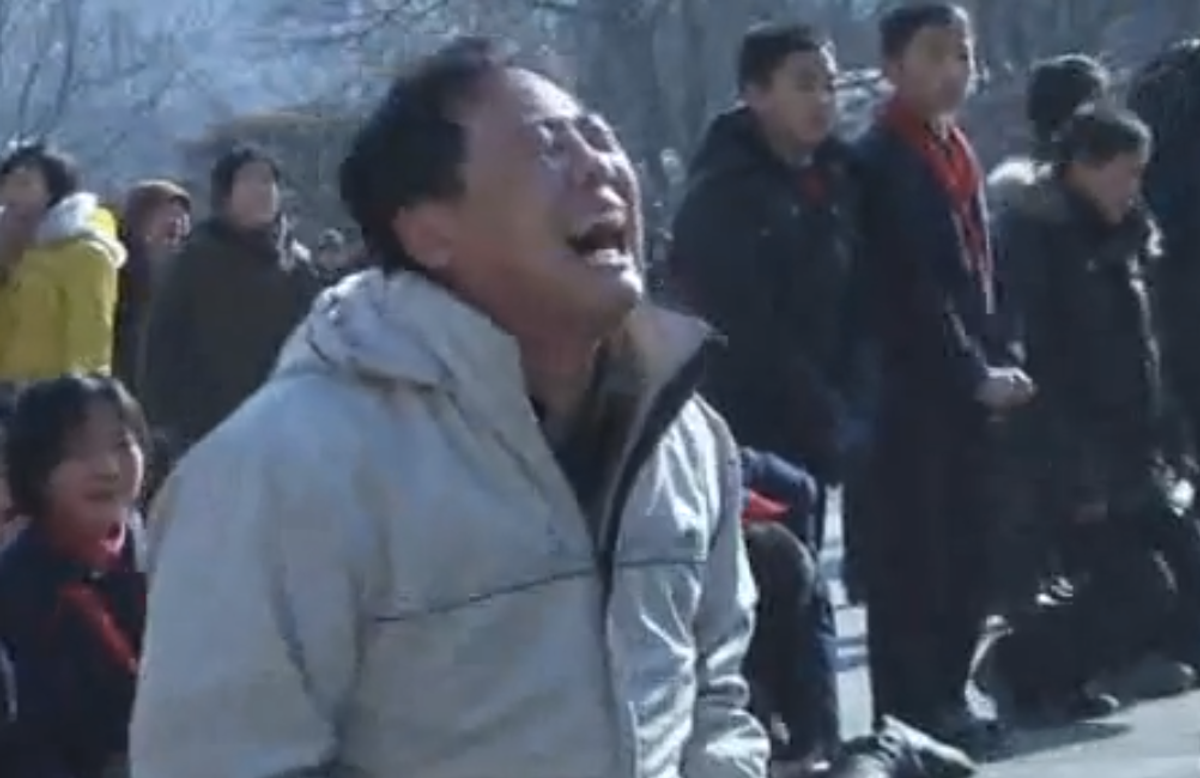 Screengrab of a video from the nation's government propaganda mouthpiece, the Korean Central News Agency
--

FAIRBANKS, Alaska — North Koreans videotaped after hearing the news of ruler Kim Jong Il’s death appeared to go berserk with grief. There are several explanations for this — by no means all of them involving sincere love for the notoriously self-centered dictator.

First there’s Korean culture. Koreans are noted for being emotionally demonstrative at such times. It’s the thing to do.

Take the case of South Korean President Park Chung Hee, who resisted intense popular pressure that he step down after 18 years as military-backed dictator. In 1979, his intelligence chief shot him to death.

Although Park had drastically overstayed his welcome with the South Korean people, he got a noisy, tearful sendoff. Along the route of his Seoul funeral procession women, especially, outdid themselves in screaming, wailing and shaking their fists at heaven.

Second, the footage of mourners for Kim Jong Il appears to have been shot mainly or entirely in Pyongyang, the capital.

Only certified Kim family loyalists are allowed to live in Pyongyang, where housing and food supply are better than in the provinces. In some of the more benighted provinces people live in slum conditions, lack the facilities for basic hygiene and suffer malnutrition, even starvation.

The South Korean magazine Weekly Chosun reported in October that it had obtained a list of 2,108,032 Pyongyang residents compiled in 2005 by State Security, a secret police organization. Of those capital residents, about 830,000 were members of the ruling Workers’ (communist) Party and most of the rest were their family members or prospective party members, the publication suggested, adding that there are only about 2 million party members in the entire country.

Pyongyang dwellers tend to see themselves as having a vested interest in maintenance of the Kim family regime. Defector reports suggest that many of them had few illusions about Kim Jong Il, considering him a leader far inferior to his late father.

Still, it could have come as a genuine shock to some to realize they must contemplate life without Kim Jong Il, a known quantity at least, in charge of the country. Most of them know little about his son and heir Kim Jong Un, who is only about 29 years old and notably inexperienced in affairs of state.

The third factor: Especially if it continues for more than another day or two, much of the grieving display can be put down to a combination of indoctrination and coercion.

Oh Young Nam, a police officer who defected to South Korea, in an interview not long afterward described the scene following the 1994 death of Kim’s father and predecessor as dictator. “The media showed North Koreans weeping in front of the statue of Kim Il Sung,” Oh said.

“That lasted only three days” on people’s own volition, Oh continued. Kim Jong Il wanted it to continue so he “made every organization send a certain number of people to weep each day in front of the Kim Il Sung statue.”

The late Hwang Jang Yop, a former party ideology boss who defected to South Korea in 1997, wrote that after Kim Il Sung’s death “the entire country was swept up in a flood of tears.”

“Most of the mourners were crying because they had been brainwashed by Kim Il Sung’s personality cult,” according to Hwang. “But there was also the fact that anything other than mourning was not allowed.”

“The party conducted surveys to see who displayed the most grief, and made this an important criterion in assessing party members’ loyalty. Patients who remained in hospitals and people who drank and made merry even after hearing news of their leader’s death were all singled out for punishment.”

Hwang at the time supervised an ideological think-tank called the Juche Science Institute. There, he said, “Professor Hong Seung Hoon, the director of economic research, was demoted for remaining dry-eyed and busy repairing his bicycle. This incident eventually took its toll on Dr. Hong’s health and led to his death.”

Fourth, many of the residents of Pyongyang double as actors to impress visiting foreigners. They start as little children performing in events such as the Arirang “mass games” that have been the regime’s main tourist attraction in recent years.

They’re good at their work. So if you see a video showing more sobbing and tearing of hair a week from now, and are inclined to believe the mourners are really and truly torn up, you may want to think again.

Bradley K. Martin is the author of "Under the Loving Care of the Fatherly Leader: North Korea and the Kim Dynasty,".