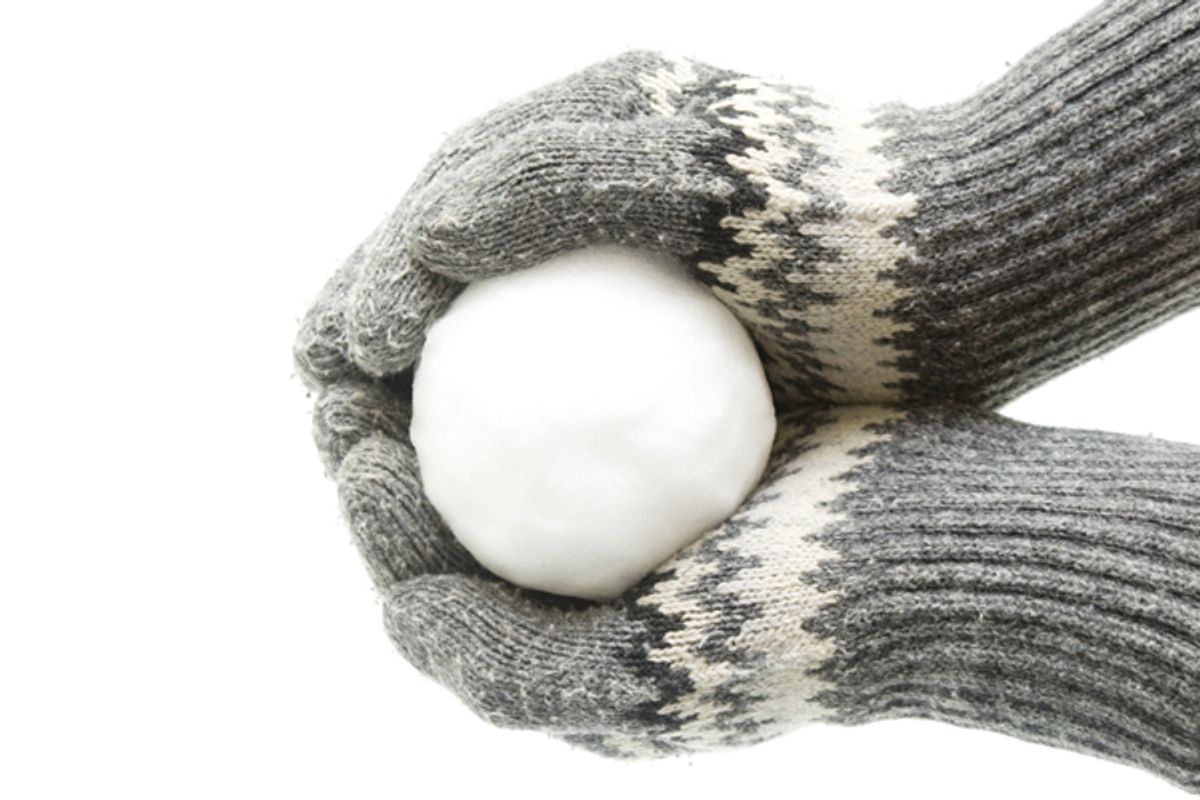 If countries have colors, then mine was yellow. I grew up in India in the late '80s and '90s. The roads were dusty, the air humid, the trees dry and wilting. And everywhere, there was the sun, blazing, relentless, spanning our whole world. It cast a bright yellow sheen on everything. The sky over us was the color of daffodils and canaries. I knew this well, even though I had never seen a daffodil or a canary, but had only read about them in my British storybooks.

Our prolonged summers made us long for rain. In our largely agrarian land, farmers prayed for rain to come nurture their crops. Lovers in Hindi movies broke into song when the heavens opened, schools shut early, trees turned green and the sky a gray that would not be considered charming in most places on earth. But for us, rain was a respite. And it was the only form of precipitation most of us would ever see.

Of course there were images of snow in Hindi movies, like the song in "Junglee" where superstar Shammi Kapoor slid down a snow-covered slope screaming Yahoo. But mostly snow was a cultural symbol from the West. I thought of America as a cold place, a white landscape. Visual images from Hollywood blended together to confirm my idea of America as a vast winter wonderland. Whether it was Russia in "Dr. Zhivago," or suburban Connecticut in "The Ice Storm," or Spitsbergen in various adaptations of "The Snow Queen," it was the West and the West was white. It seems odd now to think that Hollywood is located in sunny southern California where it never snows. And yet, the movies it makes so often re-create life in New England with its Victorian homes, Ivy League schools, and cold, white winters. Or maybe those were the images that stuck because they provided an escape from tropical heat and vegetation.

In the comic books we read growing up, "Archie" and "Calvin and Hobbes," the lasting images were once again of Christmas and snow. Calvin has snowball fights with Hobbes or crashes down slopes on his sled. Calvin always comes home to hot chocolate and marshmallows. Archie and Veronica cuddle by the fire. The world of comic books with their chimneys and fireplaces, set against the backdrop of carols sung by old-timers like Jim Reeves and Pat Boone, seemed much cozier than our own homes. The thought of chestnuts roasting by an open fire was as magical and exotic to me as elephants and tigers roaming the streets with maharajahs might have been to a suburban middle-class kid growing up in America.

In the fall of 2002, without really ever planning to, I landed in America. I was a jaded 20-something grad student, and I tried to embrace my new surroundings without the preconceived notions of my childhood. No stereotypes, I told myself with grim determination. Indians do not all have arranged marriages or adhere to the caste system. I rolled my eyes at unbelievers.

First, I moved to Florida, then two years later to Texas. And five years after that, I moved to Georgia. Nine years in the South. Nine years when I barely remembered what I had known all along. That in America it was supposed to snow.

But it didn’t. There were palm trees and glimpses of the Gulf of Mexico. There were tropical hurricanes that reminded me of the monsoon. Summers brought blistering heat and winters were mild. Things bordered on the unfamiliar but never went far enough. Physically I remained within my comfort zone. In many ways, it was like I’d never really left India.

There was one exception. On Christmas Eve in 2004, I was watching the news on TV, alone in my small studio apartment. It was a quiet, lonely winter. I had arrived in Houston a few months ago, didn’t have a car, which made it impossible to navigate that chaotic city, and had only a handful of acquaintances, who were gone for the break. The news turned to the weather and I stared at the map on the TV without any real interest. The sound was turned to mute. Suddenly, though, something looked odd. I peered closer. There were clouds on the map over the city, but instead of the usual drops of rain falling from them, there were little white flakes. In Houston.

I ran to the door and flung it open. There it was. Snowflakes fell softly to the ground. The sky was lit up, white, hazy. The air had gotten colder. I walked to the top of my stairs. Down in the yard, my landlady, Nancy, was walking around with a camera, taking photographs. Of the few flakes of snow that kept falling. Of the car with a thin sheet of white on the top. Of the white dust that covered the stairs, the roof of her house, the ledges of the windows, the branches of trees.

I ran my hand along the wooden banisters. The slushy, white powder turned to water under my touch. Nancy and I laughed at each other. I was an Indian. I’d been in the States just two years. She had lived in Texas all her life. We were the same.

That was Houston’s first snowfall in 25 years. The next day this would make news. The next day, all traces of the snow would disappear with the first rays of the sun. But that night, I stood in the freezing cold in my pajamas and sweat shirt, and gathered up a small ball of snow. I placed it carefully in my freezer. A souvenir. My first Christmas in Texas. It was a good omen. That night, I snuggled in my bed, feeling cozy and content. Snow wasn’t as exciting as thunderstorms. It was quiet, calm. It soothed. It healed.

I still remember how the snowball felt in my hand. The shape, like a ball of dough ready to be rolled into a roti. The texture, like hardened powder being held together by moisture. The wet, cold, white ball in the palm of my hand. Perhaps I put it in there, beside the ice trays and behind the tub of ice cream, because it was Christmas Eve, and I was alone. Or perhaps because I thought I’d never see snow again. Whatever it was, it was like innocence. Like my childhood spent in India. Like something lost. It was a little bit of America, a little bit of miracle.

Since then, every once in a while, when I least expected it, I’d catch a glimpse of snow, of fleeting flurries or the remnants of a blizzard on a visit up north. But they disappeared as soon as they’d come, like a dream. They never lived up to my childhood visions.

This summer, I moved to Grand Rapids, Mich., for a job. Since I decided to move back in February, colleagues, students and strangers have been teasing me about the winters here. Every first conversation with a new person in Grand Rapids has either begun or ended with a discussion of the winter. I have both sought and received advice on clothes, boots, tires, walking, driving, shoveling. The demands of my first tenure-track job itself didn’t seem half as scary as the prospect of facing my first real winter. The anticipation has built up for months.

A few days ago it finally snowed here for the first time. I woke up to find the grass white. Snowflakes were lodged in the fir tree outside my window. When I walked outside the air was crisp and smelled sharp, like peppermint. The ground was crunchy under my feet, like gravel. Every sensory impression seemed heightened, as if the world itself had frozen to a standstill.

But this time I did not make a snowball to save in my freezer. This time I stood by my third-floor office window and pictured my car going up the bridge on my way to work, the one with the warning sign about ice at its foot. I pictured myself walking across campus from class to class in my heavy boots. I pictured myself doing groceries and buying gas with the snow and wind whirling around me.

This time I braced myself for Lake Effect snow and accumulation. The lake will dump about 100 inches of snow this winter according to the forecast. This time I prepared to arm myself with traction and insulation. Thermal gloves, waterproof hat, ear-warmers, snow boots, down coat, sand bags.

I, a city girl, now live in a smallish town in the Midwest, a town most of my Indian friends have never heard of. Here, I have seen deer walking around in people’s backyards, and flocks of geese resting in parks. Here I see vast stretches of cornfields and orchards on either side of the road when I drive. It’s a world of simplicities I’ve never inhabited before and don’t quite know what to make of.

The one-dimensional visual images of my childhood have come to life. I’m a professor, I suppose, not a grad student anymore. And I’m not dreaming; this time I’m really in America. I watch these realities as they fall gently to the ground and accumulate.

Oindrila Mukherjee is an Assistant Professor of creative writing at Grand Valley State University. She has worked as a journalist in India, and has a Ph.D. in literature and creative writing. She writes fiction and nonfiction, and translates Bengali literature to English. She tweets about Michigan weather and other things at @oinkness.