"The Girl With the Dragon Tattoo": A bigger, darker Swedish nightmare

Daniel Craig and Rooney Mara lend emotional depth to David Fincher's sweeping film -- but was it worth doing? 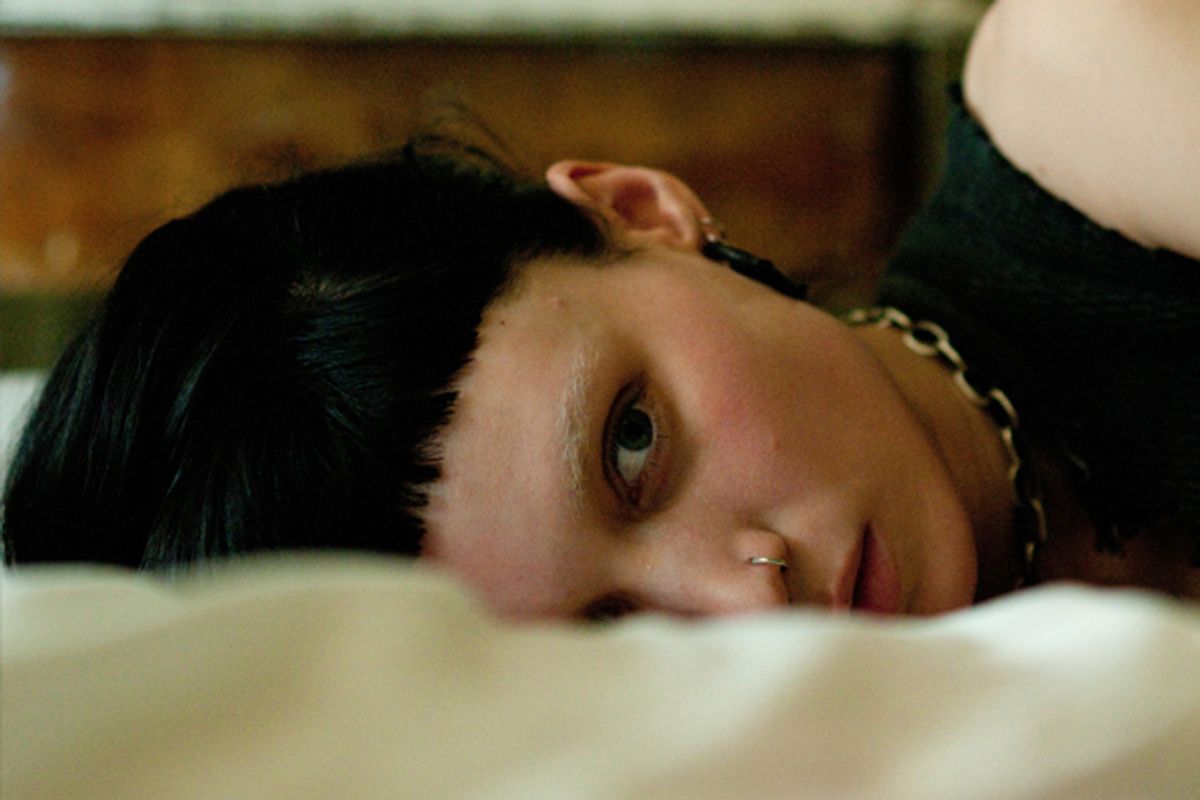 Rooney Mara in "The Girl with the Dragon Tattoo"
--

There's no question that David Fincher and screenwriter Steven Zaillian have found a degree of depth and subtlety in "The Girl With the Dragon Tattoo" that I'm not sure Stieg Larsson knew was in there. As always with Fincher, you get a beautifully engineered production, where even at an unwieldy 158 minutes, every shot and every ominous sound cue are there for a reason. Among living Hollywood directors, only Martin Scorsese is Fincher's equal for meticulous brilliance. Given the sprawling procedural novel to which the filmmakers had to remain faithful (mostly), this is an ingenious and engrossing work of pop cinema. That said, when it was over I felt a wave of ennui wash over me upon reflecting that we've got two more of these to go. Do we really need an entire new series of these films? (Sure, the marketplace will provide an answer, but that might not be the only answer.) And do we really want Fincher devoting the peak years of his career, not to mention a significant portion of his mortal existence, working his way through the pulpy twists and turns of this franchise?

Surprisingly, one of the biggest improvements over Niels Arden Oplev's 2009 Swedish-language version (which, in fairness, is pretty good -- a whole lot better than its successors) lies in the acting. Rooney Mara is a revelation as Lisbeth Salander, the damaged, aggressive computer geek and feminist revenge angel, playing the character as far more feral and vulnerable than Noomi Rapace's borderline-stereotype sexpot Goth girl. And Daniel Craig leaves his Bond manner and wardrobe at home, playing disgraced journalist Mikael Blomkvist as a wry, bespectacled, middle-aged dad, who never considers the idea of being Lisbeth's sexual partner until it happens, and never seems at ease with it after that. I like Michael Nyqvist, the Swedish actor who played Blomkvist in the first series, but there's a reason he's moved on to playing Hollywood villains. There's a bit too much wolfish swagger about Nyqvist, a bit too much leather jacket, a bit too much confidence that he can outdrink younger guys and bag younger women. Craig can certainly turn on the masculine charm, as required, but his Blomkvist is a driven professional in search of redemption, not a wallowing Hemingway romantic.

Surely there's somebody out there who hasn't read the book or seen the previous movie, and doesn't know the story. On the other hand, maybe not; my usual focus group consists of my mother and my mother-in-law, and they've both read it. Let's cut to the chase by saying that Fincher and Zaillian remain generally true to Larsson's novel while perhaps rearranging its emphasis a bit, but also that -- as you may have heard, O frequenter of the Internet -- they have indeed crafted a clever new solution to the central mystery, as well as a final scene that's quite different from the Oplev film (but closer to the novel). No doubt all sorts of people will complain for all sorts of reasons. In my view the rewrite is a canny adjustment, far more in keeping with the nature of the characters, and a solution Larsson -- who was a terrific storyteller, if an indifferent writer -- might well have approved of were he around to do so.

Undone by his own sloppiness and facing a major libel judgment, Craig's Blomkvist walks away from his investigative magazine and his long-running relationship with Erika (Robin Wright), his married editor. He goes into a bar, orders a coffee and a pack of Marlboro Reds, smokes one and throws the pack in the trash -- exactly one of those character-defining actions Fincher handles so exquisitely. That's when he gets the call from a shadowy lawyer who works for Henrik Vanger (Christopher Plummer), an aging, reclusive tycoon who just happens to be the former boss of the guy who ruined Blomkvist's career. As we already know, Vanger's people have employed Lisbeth to compile a confidential and not necessarily legal report on Blomkvist. (She doesn't think he performs cunnilingus on Erika often enough.)

While Blomkvist begins to investigate the presumed murder of Vanger's beloved great-niece 40 years earlier -- she disappeared from the remote family-owned island Vanger describes as a nest of thieves, misers, bullies and Nazis -- Lisbeth is in Stockholm, battling skinheads on the subway and wreaking vengeance on Bjurman (Yorick van Wageningen), her abusive guardian. I realize that Lisbeth's brutal rape by Bjurman, and the equally cruel and violent payback, are supposed to be crucial moments in her life and her story. Furthermore, I think I get the point: In a corrupt and chaotic universe, you have to fight fire with fire, and those with no power must find a way to get it, by any means and at any cost. But the whole knife-edge equation between Lisbeth as victim and Lisbeth as avenger, both on the page and in both screen versions, is simultaneously too schematic and more than a little queasy-making.

With her pale eyebrows, shapeless clothing and careless haircut, Mara's Lisbeth is quite a different creation from the one in the Swedish movies, and much closer to the literary heroine. She craves attention and deflects it with almost every gesture, and her hard shell can't conceal the fact that her emotions are too close to the surface. Her awkward manner, along with her photographic memory and exaggerated computational skills, suggest the possibility of an autism-spectrum disorder. When she decides to go to bed with Blomkvist, once they're finally united on Vanger's Nazi-infected island, she simply takes off her clothes, comes into his room and gets on top of him. Of course most of us know it's coming, but I still felt almost as surprised as Blomkvist does.

Fincher's not the kind of director to leave a psychological detail unnoticed, and I think he uses the sex scenes between Blomkvist and Lisbeth to disquiet us as much as turn us on. Almost a hostile stick figure with her clothes on, Mara's Lisbeth is a voluptuous, spectacular nude, and Blomkvist literally can't believe his good luck. (Discussion of Mara's nude scenes has returned the word "merkin" to the popular lexicon, and surely that's a win for everybody.) Nor does he trust it; in a subtle but significant departure from Larsson's book, it is Mikael rather than Lisbeth who remains emotionally distant, uncertain about the prospect of true love with a whack-job nearly young enough to be his daughter.

The case of the long-missing Harriet Vanger turns out, of course, to open up a whole series of gruesome, biblically themed murders of women that the Swedish cops have pretty much bungled or ignored. But isn't it nice that Harriet's brother Martin (Stellan Skarsgård), who now runs the Vanger company, is being so helpful and giving our investigators everything they need? Rather quietly, and in late middle age, Skarsgård has become one of the most reliable and charismatic performers in world cinema, capable of elevating mediocre material by his presence. (If you haven't seen his hilarious starring role in the Norwegian film "A Somewhat Gentle Man," do so immediately.) Unfortunately, by the time Martin appears, "The Girl With the Dragon Tattoo" has indeed lapsed into the kind of middling whodunit where long-hidden clues are distressingly easy to find and the villain takes a long timeout, Goldfinger-style, to explain his motives before he kills you.

As mentioned, I really do like the way Fincher and Zaillian wrap things up, and even during the movie's slower patches cinematographer Jeff Cronenweth (who also shot Fincher's "Social Network") delivers spectacular images of the Scandinavian winter and the severe interiors. Fincher's movies always have density and atmosphere to burn, and those things are arguably the point of the Millennium trilogy, more than its frankly nonsensical story line. This is an immersive and powerful thriller, driven by terrific leading performances. It's mostly really good and then it wears out its welcome. Now, seriously, can't we quit while we're ahead? I'm not sure I can stand two more rounds with Lisbeth and Blomkvist (and a pile of villains we haven’t even met yet), not to mention sit through two more movies made in that deadly "international style," where everybody speaks English with a Nordic-Slavic, Greta Garbo-meets-Ingmar Bergman accent. (Craig doesn't even do that, although other Anglophones in the cast do, including Mara, Wright and Plummer.) The Nazi-Soviet woman-hating butler did it. Is that good enough?