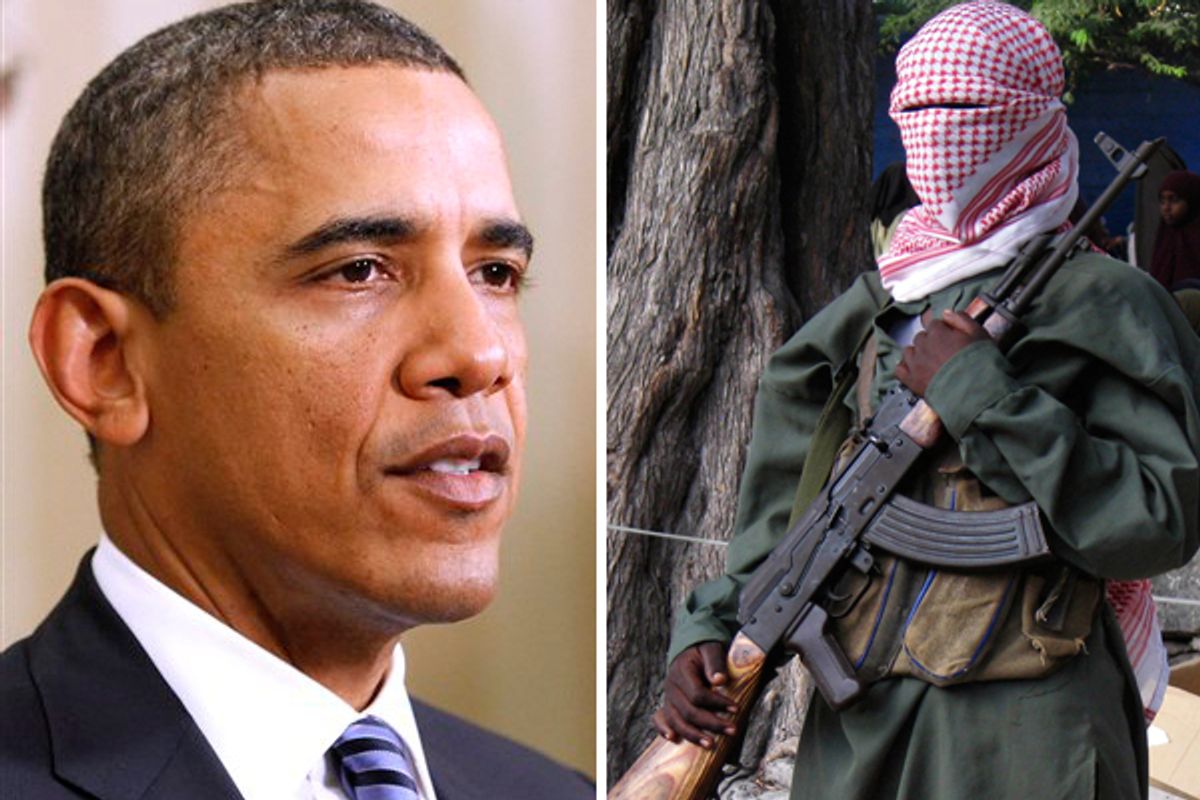 The Obama administration and The New York Times are teaming up to expose and combat the grave threat posed by a Twitter account, purportedly operated by the Somali group Shabab, and in doing so, are highlighting the simultaneous absurdity and perniciousness of the War on Terror. This latest tale of Dark Terrorist Evil began on December 14 when the NYT's Jeffrey Gettleman directed intrepid journalistic light on the Twitter account maintained under the name "HSMPress," which claims to be the press office of Harakat al-Shabab al-Mujahedeen, the Shabab's full name. Gettleman's article included this passage early on in its account:

That has to be the single most amusing phrase ever to appear unironically in the Paper of Record: Twitter terrorism. And, of course, the authority cited for this menacing trend is that ubiquitous sham community calling itself "terrorism experts," which exists to provide the imprimatur of scholarly Seriousness on every last bit of inane fear-mongering hysteria. That cottage industry (like the government's demands for greater power and Endless War) remains vibrant only if Terrorism does (that is, Terrorism by Muslims: a propagandistic redundancy). Thus, with Osama bin Laden dead, a full decade elapsed since the last successful Terrorist attack on U.S. soil, and the original Al Qaeda group rendered inoperable, these experts are now warning the nation about lurking sleeper tweets.

In that original article, Gettleman detailed the taunting Twitter messages directed by this account at the Kenyan Army, which has responded in kind. The exchanges sound exactly like every other petty, schoolyard Internet spat that has ceaselessly sprouted up in every cyber crevice for the last two decades. After quoting a Terrorism expert from Rand on the menace of social media Terrorism, Gettleman provided just a small taste of the frightening threat posed by this innovative vehicle for jihadism:

For the Shabab, this often translates into pithy postings, like “Europe was in darkness when Islam made advances in physics, Maths, astronomy, architecture, etc. before passing on the torch,” and sarcastic jabs at the Kenyan Army. Kenya’s military spokesman, Maj. Emmanuel Chirchir, is also a loquacious writer of posts, and the result is nothing short of a full-on Twitter war.

After Major Chirchir wrote that the Shabab might be transporting weapons on donkeys and that “any large concentration and movement of loaded donkeys will be considered as Al Shabaab activity,” the Shabab responded: “Like bombing donkeys, you mean! Your eccentric battle strategy has got animal rights groups quite concerned, Major.”

Major Chirchir fired back, “Life has better to offer than stonning [sic] innocent girl,” a reference to the Shabab’s penchant for harsh Islamic punishments like stoning.

The Shabab have teased Major Chirchir for his spelling mistakes and have tossed around some SAT-quality words.

“Stop prevaricating & say what you really think, Major!” the Shabab wrote. “Sure your comments will invite derision but try to muster (or feign) courage at least.”

As CNET's Declan McCullagh noted: "For scary Somali militants, the folks behind @HSMPress have a fine appreciation of Starbucks' caramel macchiatos" (undoubtedly, Terrorism experts would quickly admonish McCullagh that this is no laughing matter, as tweets of this sort -- innocuous though they may appear to the untrained, non-expert eye -- could contain coded directives to activate plots against the West).

Toward the end of the article, Gettleman tacked on what he and his editors apparently considered to be an unimportant afterthought: "Of course, it is impossible to know who exactly is operating the Twitter account." Of course: but there's no reason to let that small fact deter anyone.

All of this would be worth nothing more than a few moments of entertaining ridicule if not for the reaction it has spawned. Gettleman is back today with a new article detailing the response of the U.S. Government to his exposé. Headlined "U.S. Considers Combating Somali Militants’ Twitter Use," the article reports:

The United States government is increasingly concerned about the Twitter account of the Shabab militant group of Somalia, with American officials saying Monday that they were “looking closely” at the militants’ use of Twitter and the possible measures to take in response. . . .

[S]ome American officials said the government was exploring legal options to shut down the Shabab’s new Twitter account, potentially opening a debate over the line between free speech and support for terrorism. . . .

American officials say they may have the legal authority to demand that Twitter close the Shabab’s account, @HSMPress, which had more than 4,600 followers as of Monday night.

So the U.S. Government believes it may have "legal authority" to compel Twitter to close accounts. From where does that authority derive? Presumably, the Obama administration could consider Twitter's providing of a forum to a designated Terrorist organization to constitute the crime of "material support of Terrorism." That raises a variety of questions: is the NYT guilty of that crime by quoting some of those tweets and promoting the account (since the first NYT article was published, the number of people following @HSMPress has significantly increased and is almost certain to increase more as a result of today's article). Can one be guilty of that crime if one re-tweets any of their messages? How about if one defends their right to have a Twitter account?

What is more likely than compulsory action is thuggish extra-legal intimidation aimed at Twitter to "voluntarily" close the account. That path is less overt but just as insidious, if not more so. That is how government officials such as Joe Lieberman succeeded in cutting off all of WikiLeaks' funding sources and web hosting options without the bother of charging that group with a crime: by demanding that Amazon, Master Card, Visa, Paypal and others "on their own accord" terminate WikiLeaks' accounts and refuse to provide the group with any services. As EFF's Trevor Timm asked today: "How fast does Joe Lieberman release a statement today saying we should censor the Net in the name of national security? I bet before noon."

Are there really people who want the U.S. Government empowered to dictate who can and cannot have social media accounts to communicate ideas? Two weeks ago, the London Police characterized the Occupy movement as a "Terrorist" group alongside Al Qaeda and FARC. The Kenyan Army spokesman engaged in the "Twitter war" with the Shabab account today wrote: "Al Shabaab needs to be engaged positively and twitter is the only avenue." Having the government shut down social media accounts is laughably ineffective -- it would take Shabab about 30 seconds to open a new one -- but the theories embraced to justify that power are purely tyrannical.

At this point, there is an almost perfect inverse relationship between the seriousness of the Terrorist threat and the severity of the powers the U.S. Government claims in its name. The Washington Post today has a long and quite good article by Karen DeYoung entitled "Secrecy defines Obama’s drone war." It describes how the Obama administration claims the right to kill anyone designated by the President as a Terrorist anywhere in the world, in total secrecy and without any checks, and how the administration refuses to account to anyone for what it does, who makes those decisions, and on what basis:

Since September, at least 60 people have died in 14 reported CIA drone strikes in Pakistan’s tribal regions. The Obama administration has named only one of the dead, hailing the elimination of Janbaz Zadran, a top official in the Haqqani insurgent network, as a counterterrorism victory.

The identities of the rest remain classified, as does the existence of the drone program itself. Because the names of the dead and the threat they were believed to pose are secret, it is impossible for anyone without access to U.S. intelligence to assess whether the deaths were justified.

In outlining its legal reasoning, the administration has cited broad congressional authorizations and presidential approvals, the international laws of war and the right to self-defense. But it has not offered the American public, uneasy allies or international authorities any specifics that would make it possible to judge how it is applying those laws. . . .

“They’ve based it on the personal legitimacy of [President] Obama — the ‘trust me’ concept,” [American University Professor Kenneth] Anderson said. “That’s not a viable concept for a president going forward.”

The powers with which the U.S. Government has vested itself would be disturbing and odious no matter the magnitude of the highlighted threat. But the fact that they're now reduced to bottom-of-the-barrel screeching about Twitter Terrorism -- while simultaneously claiming the "legal authority" to force the closing of social media accounts -- reveals just how wide is the gap between the magnitude of the powers they seek and the magnitude of the threat they cite to justify them. As always, the War on Terror is not a means to an end; it is the end in itself.

That link goes to this article. Perhaps a zealous U.S. prosecutor could use this as evidence to allege that I have materially supported Terrorism (though the NYT should be first in line to be so accused, given that this Twitter feed has gained another 1,000 followers today as a result of that newspaper's highlighting of it). On a related note, Mother Jones' Adam Serwer looks at a conviction today to document a very ominous trend, one I've written about several times: the way the DOJ and courts are jointly converting pure free speech into the crime of "material support for Terrorism."