Why I still believe in Santa

Childhood joys disappear so quickly. Sometimes you want to hold on to magic as long as you can 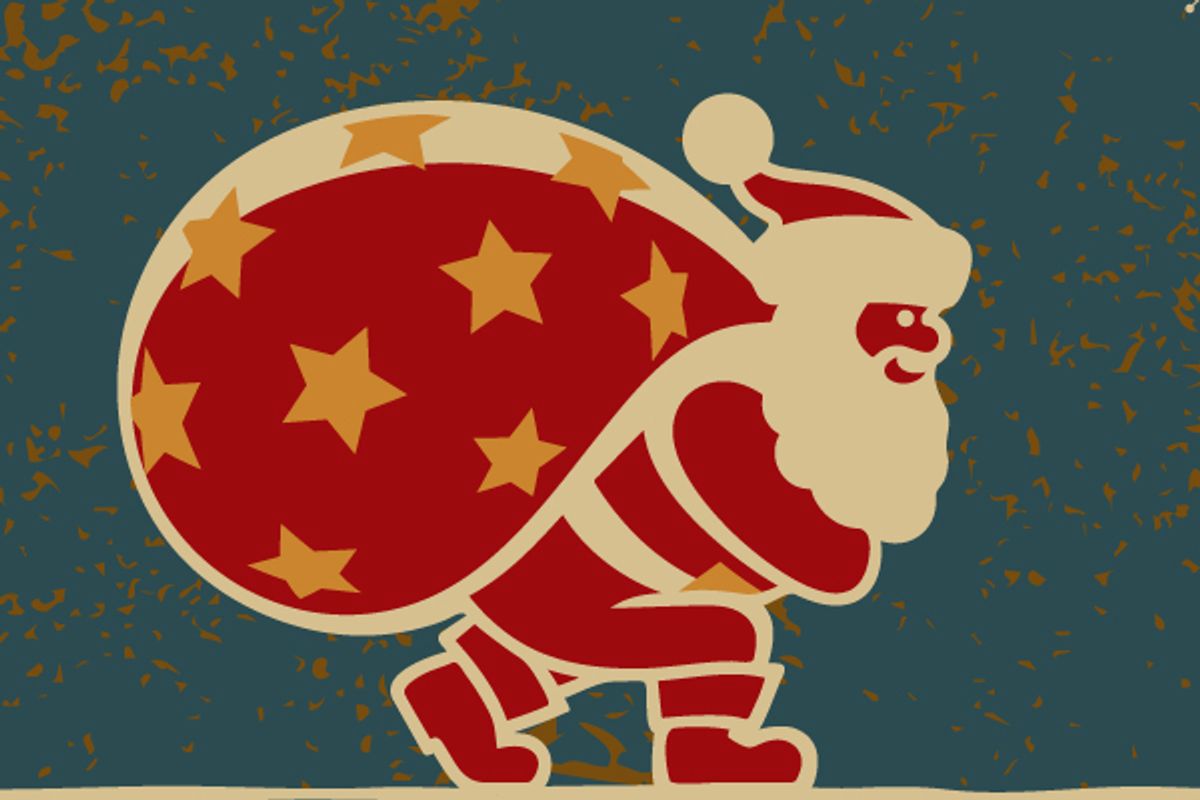 My eldest daughter, Lucy, is a natural-born skeptic. She rolls her eyes whenever anyone mentions astrology. She recently declared a gym teacher's command that students open their palms to receive energy from the universe "pointless." She laughs off my negativity-banishing feng shui gestures at home. This is a girl who says she believes in God, but doesn't "go for a lot of that stuff in the Bible." One who, for many years, insisted that Santa was not welcome in our home, because she only wanted presents from her family. And who, at age 11, suddenly finds herself wondering if this Christmas might be her last chance to believe in something.

Her younger sister has never wrestled with any similar spiritual conflicts. Open and trusting, Beatrice  happily accepts the existence of everything. Mermaids, fairies, unicorns, the baby Jesus in a golden-fleece diaper – you name it, she's all in. Yet the innocent realm of childhood fantasy can be a tricky place for parents to navigate. Do we let our babies believe in pixies? And if so, how do we handle it when they believe in monsters, too? There's no single right or wrong way to handle it. I know parents who are raising happy, secure children who've never thought of Santa as anyone other than a character in old Rankin-Bass productions. But although I've always tried to be honest with my daughters, I figure we spend most of our lives relatively magic-free. As a result, as long as my kids have been inclined, they've been allowed as much magic as they want for as long as they need it.

When Lucy declared "No Santa!" at age 2, I assumed we had dodged that particular mythological bullet. Bea changed all that. She brought Santa back in the house. Christmas Eves are now spent tracking his movements on NORAD; cookies are left as a hopeful offering. But even since getting back in our familial good graces, Santa has never been our Christmas superstar. We've always been big on acknowledging -- and encouraging – the generosity in each other. Presents under the tree bear tags from family members, while the toy maker up at the North Pole is merely a supporting player. My daughters' Santa is very much like the one I grew up with -- a man who exists largely in lawn decorations and a few sweet rituals.

My mother has never told me there was no Santa Claus. To this day. I received presents with his name well into adulthood. I don't remember exactly when I got hip to the logistical impossibility of St. Nick's workload, but as a fatherless little girl, I clearly remember wishing that he could be real, even when I knew that he wasn't. I clung to him long after my friends and I were too big to officially believe, comforting myself with listening for sleigh bells on Christmas Eve. When I became a mother myself, I knew that "don't ask, don't tell" was the model I wanted to follow. That red-suited figure with a weight problem, I've always believed, must never be blatantly obliterated. I have loved ones who still define the end of childhood as the moment their parents told them about Santa. I wanted to spare my kids that disillusioning revelation, and let them decide for themselves when they were ready to graduate from Santa-as-reality to Santa-as-Yuletide-figurehead. And that's exactly how it's working out -- though not as I expected.

Lucy has spent her entire life with at least one foot out of the Santa game. She'll relentlessly pound me with questions about how anything in the universe works, but has always remained conspicuously uncurious on the nature of flying reindeer or elf sweatshop conditions. When her sister isn't around, she occasionally employs air quotes when she speaks of St. Nick, as in "I hope 'Santa' notices I need new boots." The 7-year-old, meanwhile, still asks exactly what time he's getting here and how he's going to park eight reindeer on our tiny fire escape.

So when Beatrice sat down to write this year's letter to Santa – a list of demands, really -- I wasn't surprised when her big sister sat down next to her to pen one too. It was a moment of sisterly bonding. But then Lucy did something unusual. She sealed her letter without revealing its contents -- the better, she said, to see if she got her wishes. Apparently, a small part of her believes in the old man enough to test him. And though she has never once been near a department store Santa, this year she asked if we could all go to Macy's.

"Why the sudden interest?" I asked.

"I don't know," she shrugged. "Maybe I want to tell him he sits on a throne of lies." Then she added, "Maybe I just want to see him."

Even those of us who dreamily romanticize our childhoods, painting Norman Rockwell tableaus out of Angela's Ashes, can usually still remember that pre-adolescence is a pretty sucky time. Friends abruptly come and go. Schoolwork gets intense. You suddenly get tall or you stubbornly stay small. You realize, with a looming sense of urgency, that you will soon no longer be a child. And that, like so many changes in life, is both a wonderful and terrible thing.

As if being 11 weren't trying enough, my daughter has had a hell of a year. She spent the first half of it applying to, testing for and interviewing at middle schools all over our city, thanks to our cruelly grueling public-school process. She's started in a new school that's terrific, but in a distant part of town and with a whole new crop of kids to figure out, in a school full of big, rowdy teenagers. The last time she saw her grandfather was for her birthday. A few weeks later, he died of cancer. His brother, known to Lucy as her Uncle Jim, died just 10 days earlier. She has watched her mother go from recovering from cancer to exploratory surgery to full-blown late-stage melanoma – she was in the same room, in fact, when I got the stunning phone call. She now has a mom whose clinical trial leaves her weak, dizzy and frequently too exhausted to help with her homework. She has witnessed so much grief. She has had so much change. No wonder Santa's looking pretty good right about now. That guy reeks of stability. No wonder she wants to enjoy being a little girl, before it slips away entirely. I want that this Christmas, too. I want one more wish to the North Pole.

I strongly suspect Lucy, a girl whose favorite word is "A-HA!," knows perfectly well who eats the cookies and who puts the presents under the tree. She also knows who Virginia O'Hanlon was, and the words Francis Pharcellus Church wrote to her on the subject of Santa. Santa, he wrote, "exists as certainly as love and generosity and devotion exist, and you know that they abound and give to your life its highest beauty and joy ... The most real things in the world are those that neither children nor men can see." Lucy knows, because for all the pain and uncertainty she's experienced this year, she's received 10 times that in the love and generosity and devotion that Church wrote about so eloquently. That's why, even as she permits herself these last waning fantasies of childhood, I can see the wise young woman blossoming within her. My Little Miss Know It All, who teases me for superstitiously hanging on to fortune-cookie promises, is discovering the wonder of mystery, the possibility of things unseen -- and the joy of savoring the moment before it's gone.

If you ask me how I talk to my kids about Santa, I'll tell you that any family that has been given so many gifts can't help having confidence in the fantastic. We all need miracles. Eleven-year-olds, especially. I'll say there's nothing like reality to make you trust in the impossible. And I'll tell you what I tell my kids – "Would I let you waste a stamp on someone who didn't exist?" I'll say that yes, Lucy, there is a Santa Claus. He's the man your sister writes deeply sincere letters to. He's also your mom and your dad and your sister and your grandmother and all your funny, spirited, kind friends. He's every tender moment of your rapidly diminishing childhood, and, I have no doubt, every fantastic adventure you have yet to come. He's your own beautiful, shining heart. He's that part of all of us, at every age, still willing to give, still willing to hope. And, sometimes, to still believe in the sound of sleigh bells on the roof.