Hand over the fork, sir! 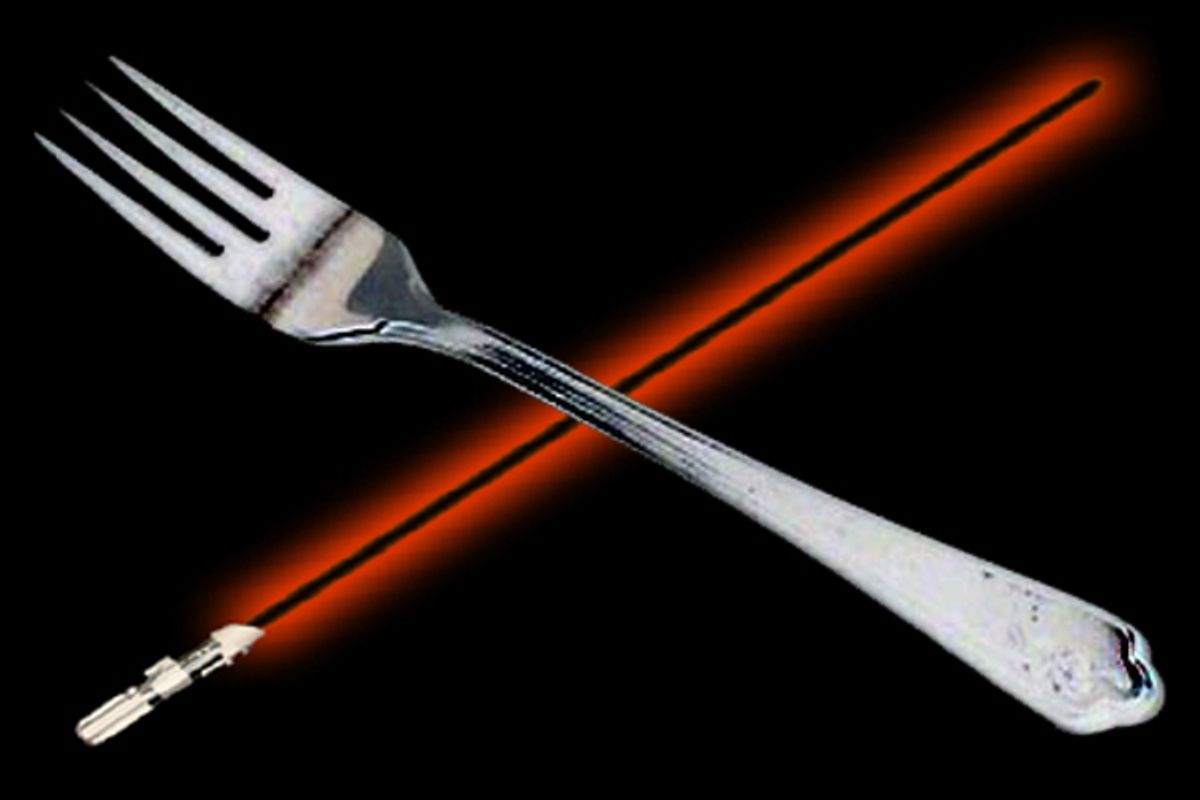 There are those moments when you look for the hidden camera.

A couple of weeks ago  I proposed my idea for the American Hysteria Hall of Shame, a ranking of our more laughable and self-defeating overreactions to perceived security threats over the past decade. Motto: "Malignantibus Parta! Timor vincit omnia!"

Safely assured of a top spot in the Hall, or so I thought, was the time I had a butter knife confiscated by overzealous TSA guards. I mean, what could be more ridiculous than taking a butter knife from a uniformed, on-duty pilot?

Answer: confiscating a fork from a uniformed, on-duty airline pilot.

It happened the other day in Mexico City, at the special crew inspection checkpoint at Benito Juarez International Airport. Yes, I'm dropping the "American" part and changing the name to the "Security Hysteria Hall of Shame," since, as you'll see, we are not the only ones who have lost our minds.

I knew there was trouble when the X-ray belt came to a stop and I was asked to open my bag.

The offending item was a fork -- one of the small, five-inch kinds more or less identical to those dispensed by airlines in first and business class. Like my long-lost knife, it was part of the silverware pack that I carry in my luggage for those late-night hotel room ramen feasts.

Really? Let's ignore for a moment the fact that even the most hell-bent of terrorists isn't going to get very far with a hand-held weapon of any kind, let alone something as goofy as a fork. The logic in play here is something simpler: Every day, hundreds of thousands of stainless steel forks, not to mention knives, are handed out to passengers in the forward cabins of airplanes. (And why not? The hijacking paradigm exploited on Sept. 11 no longer exists.) Yet on-duty pilots are not allowed to carry them through the checkpoint?

And this is the moment when I expected the camera to appear. It was all a joke, right? The guard would break out laughing and slap me on the shoulder. "Estoy jugando, señor! Yo vi su artículo en Salon!"

Instead I got a "Sorry, sir," and a kind of shrug-wince. For what it mattered, his expression was sympathetic, and I could tell that he understood. He knew the rule was a silly one (I mean, how could he not?). He wanted to make an exception, but was powerless -- or afraid -- to do so.

This is the lunatic world of security we now live in: one of blind adherence, stripped of reason and logic, in which even the stupidest policies are enforced to the letter of the law.

It gets worse. Together with my fork was a plastic picnic knife -- my sad replacement for the metal one taken by TSA. This too was of concern. At one point the supervisor carefully ran his fingers across its deadly serrations, mumbling instructionally to his colleague.

The picnic knife was given the all-clear and returned to me. The fork, though, would be tossed into a bin, carted off to wherever it is that airport security brings its troves of pilfered property. (I propose these raw materials be melted down and used to build new terminals, each with a majestic fountain in the center bubbling with recycled soft drinks, shampoo and mouthwash.)

And so everybody was that much safer.

There's that expression: "You can't make this up." Well, really, you can't. My head spins and my bones ache just writing about it.

Like I said, we're not the only ones who've gone off the security deep end. I've encountered similar nonsense in Thailand, Nicaragua, the U.K.

In the meantime, did you catch the front-page New York Times story about the drug-smuggling and theft ring broken up at Kennedy Airport in New York? Apparently dozens of American Airlines luggage handlers were involved in a years-long operation in which they stole from passengers' suitcases and smuggled cocaine in aircraft cargo holds. They would, in some cases, hide the drugs behind the sidewall panels of the lower-deck compartments.

Baggage handlers, by the way, do not have to pass through airport security. Not before 9/11, and not since. They, like almost all tarmac workers, are subject only to occasional, random TSA checks.

I realize that the vast majority of airport ground staff are honest employees and not criminals or terrorists. I'm not suggesting that they, too, be required to hand over their forks. That's not the point, pardon the pun. It's not that they aren't patted down and X-rayed and relieved of their pointy things, it's that pilots (and flight attendants) are.

Could there be a more demented double standard? It basically nullifies everything we've been asked to believe about the supposed importance of screening airline crew members. And no offense to the hardworking baggage handlers, fuelers, caterers, cabin cleaners and mechanics out there, but who is the higher-risk employee from a security perspective, a tarmac worker or a pilot? I suppose anything is possible, but let's be realistic. If we're going to screen at all, can we at least do it rationally?

As we speak, a program is being tested that, assuming all goes well, will eventually allow on-duty pilots to bypass the normal checkpoint. It’s a simple enough process that confirms a pilot’s identity by matching up airline and government-issue credentials with information stored in a database. That it took 10 years and counting for this to happen, however, is absurd.

I know this comes across as a self-serving complaint, but ultimately this isn't about pilots. It's about how diseased our approach to security is overall. A system that is stupid enough to devote valuable time and resources relieving pilots of tableware isn't just an unfair one, but a potentially dangerous and self-defeating one.

And I needn't be reminded of the indignities endured by passengers. What's further unfortunate about the incident down at Benito Juarez is that it steals the thunder of a reader named Stacey Goldring, who shared with me a story of such sublime brainlessness that, until I lost my fork, was ready to take top honors in my Hall of Shame.

One day, flying from Dallas to Jacksonville, Fla., Goldring and her toddler son were refused passage through the TSA checkpoint because they boy was carrying ... get ready now ... his Star Wars lightsaber. A lightsaber, if you're not familiar, is a flashlight with a plastic cone attached -- or, perhaps more to the point, a toy in the shape of a make-believe weapon from a galaxy, and a line of reasoning, far, far away.

"I believe it was green," says Goldring, "indicating my son's future Jedi path. We were told by the TSA professionals that the saber, which technically is something that does not exist, was a weapon. We were escorted out of security and sent to the ticket counter, where I had to fill out paperwork in order to check the lightsaber in as baggage."

The saddest part is that few people seem to care. We grumble, we gripe, and sometimes we laugh, but there is little if any organized push to change this madness, neither by citizens nor their elected leaders. In the end, we get what we deserve.

As for me and my silverware, my patience can't bear these episodes anymore. I think I'm switching to chopsticks.

The questions was this: There is a mistake in the liner notes to the "Zen Arcade" album. What is it?

"Who ever wrote the song sings it," it says among the credits, "except for 'Somewhere,' which Grant wrote the words for." This doesn't make sense, as Grant has the vocals on that song.

Aubin gets one of the last remaining Ask the Pilot baseball caps, autographed ballplayer-style under the brim. I have one or two left, as well as a handful of small and medium-size T-shirts. My pre-holiday clearance sale is on: your choice for $10, including shipping.