December has been the best month Obama's enjoyed in a while, but there may be some serious trouble ahead 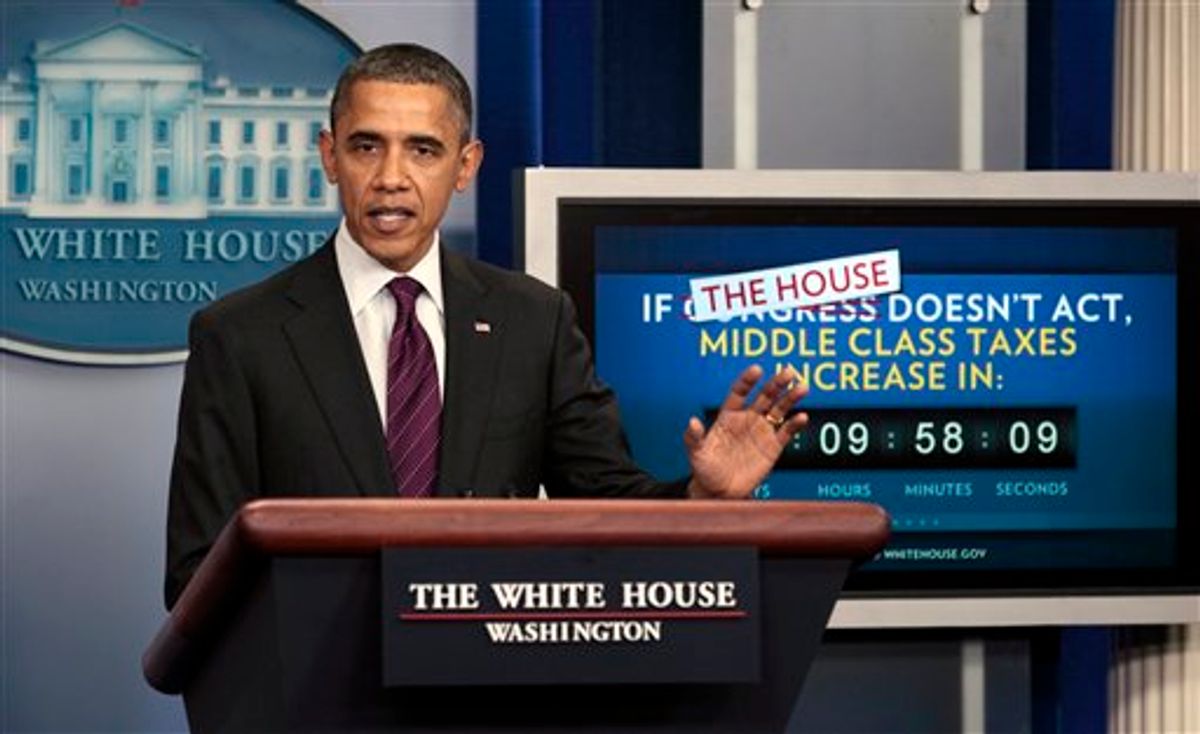 On the surface, it's been a pretty good December for President Obama.

The month started with a drop in the unemployment rate to 8.6 percent, the lowest it's been since early 2009, while  initial unemployment claims have fallen to levels not seen in nearly four years. Meanwhile, Obama's own approval rating has ticked up to the high-40s, with some significant gains among key demographic groups that had been abandoning him, while increasingly public divisions within the GOP on Capitol Hill have left the president with a strong political hand in the ongoing payroll tax debate. And on top of that, Republicans are poised either to force Mitt Romney far to the right before handing him their presidential nomination or simply anoint a less electable general election candidate.

But the front page of Thursday's New York Times offers a sobering reality check for the White House, with economic forecasters telling the paper that the encouraging recent data "probably does not represent the long-awaited start to a strong, sustainable recovery" -- and that, in fact, we may be in for a rude awakening in 2012:

There are two reasons for the renewed pessimism. First, economists say that temporary trends increased growth in the fourth quarter and may not continue into next year. Second, the economy faces significant headwinds in 2012: some from Europe’s long-lingering sovereign debt crisis, and some from domestic cutbacks beyond the control of President Obama, whose campaign would like to point to a brightening economic picture, not a darkening one. Even the Federal Reserve is predicting that the unemployment rate will remain around 8.6 percent by the time voters go to the polls in November.

The correlation between voters' economic confidence and their inclination to reelect an incumbent president is well-established, so if these dour assessments pan out, Obama's recent successes -- along with the almost comical disarray that has defined the GOP during the payroll tax standoff -- may come to look like a mirage just a few months from now.

Here the example of the last one-term president, George H.W. Bush haunts him. Like Obama now, Bush 41 closed out the third year of his presidency on a somewhat encouraging note. The economy was in trouble, but his approval ratings were still respectable and there was some optimism that joblessness -- which fluctuated between 6.9 and 7 percent in the second half of 1991 -- would peak and decline slightly in 1992. Moreover, he caught a seemingly giant break just days before Christmas, when Mario Cuomo, regarded as by far Bush's most formidable potential challenger, declined to seek the Democratic presidential nomination.

But the new year brought nothing but trouble for Bush, starting with the release of the jobs report for December '91, which showed a significant jump in the unemployment rate, to 7.3 percent. By the middle of '92, it had spiked to 7.8 percent, with Bush's approval numbers sliding in the other direction. For the first six months of '92, polls routinely showed Bill Clinton losing to Bush, but their positions reversed after the Democratic convention in July, and Clinton never looked back. Not a single independent poll in the final three-and-a-half months of the campaign gave Bush a lead over Clinton. And when Bush did receive legitimately good economic news -- a sudden surge in growth for the third quarter of the year -- it came too late to do him any good, with the election just days away. The final margin was six points, with Clinton racking up 370 electoral votes.

The Times story makes clear that Obama is essentially powerless to combat some of the sources of potential economic turbulence in '12 -- but not all of them.

This highlights a potentially tricky decision for the president in the payroll tax dispute. On the one hand, Obama seems to be scoring some real political points right now, insisting on an extension of cuts that are scheduled to expire at the end of the year while congressional Republicans bicker and point fingers at each other. "Are Republicans getting killed now in public opinion? There's no question," Republican Sen. Bob Corker admitted on Wednesday.

This is why Obama is taking such a hard line with House Republicans right now, insisting that they simply pass the short-term extension that was agreed to almost unanimously by the Senate last week and refusing to reopen discussions with Speaker John Boehner. And it may be that this works, with House Republicans relenting in the next few days and giving Obama what he wants. This is the first stand-off of 2011 in which even some major conservative voices are publicly telling the House GOP that they've gone too far.

But if the House GOP doesn't blink and the tax cuts expire, the negative economic impact could wipe out whatever political gains Obama makes from the impasse. As the Times notes:

Most worrying is the prospect that Congress will drop aid for the long-term jobless and allow payroll taxes to rise to 6.2 percent from the current level of 4.2 percent, amounting to a $1,000 tax increase on the average wage earner. Macroeconomic Advisers, a prominent forecaster, estimates that the expiration of the two provisions could cost the economy 400,000 jobs and cut growth by half a percentage point next year.

So while it makes sense for Obama to make a show of fighting the House GOP right now, it's ultimately in his interest to make sure the cuts are extended. Otherwise, we may end up looking back at this dispute a year from now and concluding that Obama won the battle but lost the war.