Ron Paul and his racist newsletters 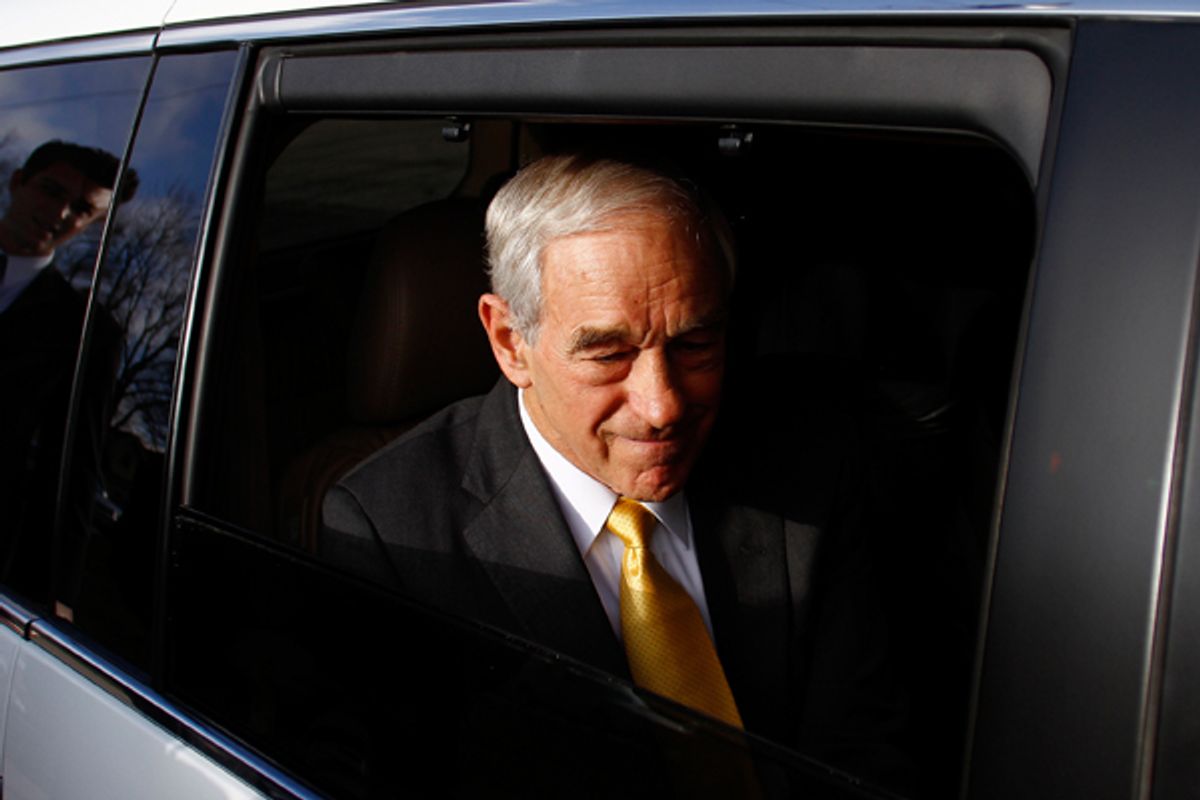 It is a fact that in the 1990s Ron Paul sold a newsletter in which a bunch of racist comments were published under his byline. We now also have evidence that Paul is lying when he claims not to have read the racist newsletters, which were most likely written by Lew Rockwell.

Here's Paul on C-SPAN in 1995, talking about his newsletters:

The fact is, Paul has lied like a very old-fashioned sort of politician about these newsletters, and he has been lying for years. He has gone through the motions of public regret about their contents, but has never acknowledged knowing who wrote the offensive material or even being aware that offensive material went out under his name. That's bullshit. Now he ducks questions on the subject entirely (and his supporters complain that it's "old news," because they have no serious defense of the comments or Paul's responsibility for them).

Ta-Nehisi Coates has been essential reading on Ron Paul's cynical embrace of racist populism and subsequent refusal to own up to it.

But while I imagine Dr. Paul doesn't believe in the inherent criminality of black males (though I'd bet he does believe some variation on his newsletter's remark that "only about 5% of blacks have sensible political opinions") these comments didn't originate in a vacuum.

Here's why they happened: Years ago, a bunch of libertarians decided to act like huge racists to win votes. Reason explained it in 2008:

The most detailed description of the strategy came in an essay Rothbard wrote for the January 1992 Rothbard-Rockwell Report, titled "Right-Wing Populism: A Strategy for the Paleo Movement." Lamenting that mainstream intellectuals and opinion leaders were too invested in the status quo to be brought around to a libertarian view, Rothbard pointed to David Duke and Joseph McCarthy as models for an "Outreach to the Rednecks," which would fashion a broad libertarian/paleoconservative coalition by targeting the disaffected working and middle classes. (Duke, a former Klansman, was discussed in strikingly similar terms in a 1990 Ron Paul Political Report.) These groups could be mobilized to oppose an expansive state, Rothbard posited, by exposing an "unholy alliance of 'corporate liberal' Big Business and media elites, who, through big government, have privileged and caused to rise up a parasitic Underclass, who, among them all, are looting and oppressing the bulk of the middle and working classes in America."

The origins of the philosophical split are explained nicely by Brian Doherty in this piece on the late Murray Rothbard. To drastically oversimplify, guys like Hayek made pragmatic economic arguments (and left room for a "limited" state to provide some measure of assistance to the needy) and Rothbard made Randian philosophical arguments (and was radically anti-state). And Rothbard went full-on neo-Confederate in order to win over the "rednecks."

Ron Paul's libertarianism has plenty of room for nativism and racism because so much of it does sound like a Pat Buchanan-style call for America to return to a golden age of white privilege. Paul isn't a futurist, like the libertarians who write hilarious odes to the coming "singularity," when we'll all become immortal cyborgs. He's a goldbug. He's a deeply religious anti-abortion small-town country doctor who basically wants the government to operate as it did in 1837.

"Liberaltarian" writer Wil Wilkinson's September piece on Paul is good reading. Wilkinson sums up the problem with an absolutist defense of the "natural rights" of property owners that ignores how those rights are often only protected for certain classes:

As a rule, libertarians have an unhealthy tendency to apply their principles without due regard to America's history of state-enforced slavery, apartheid, and sexism, or to the many ways in which the legacy of these insidious practices persists to this day. Paul represents this tendency at his worst. The Civil Rights Act of 1964, Paul has argued, led to "a massive violation of the rights of private property and contract, which are the bedrocks of free society."

Yeah, well, it's not "racist" to believe that the Civil Rights Act was an unnecessary intrusion on private property rights that made discrimination worse, but it is idiotic.