Despite his crackpot theories about the central bank, his Republican rivals often echo his ideas 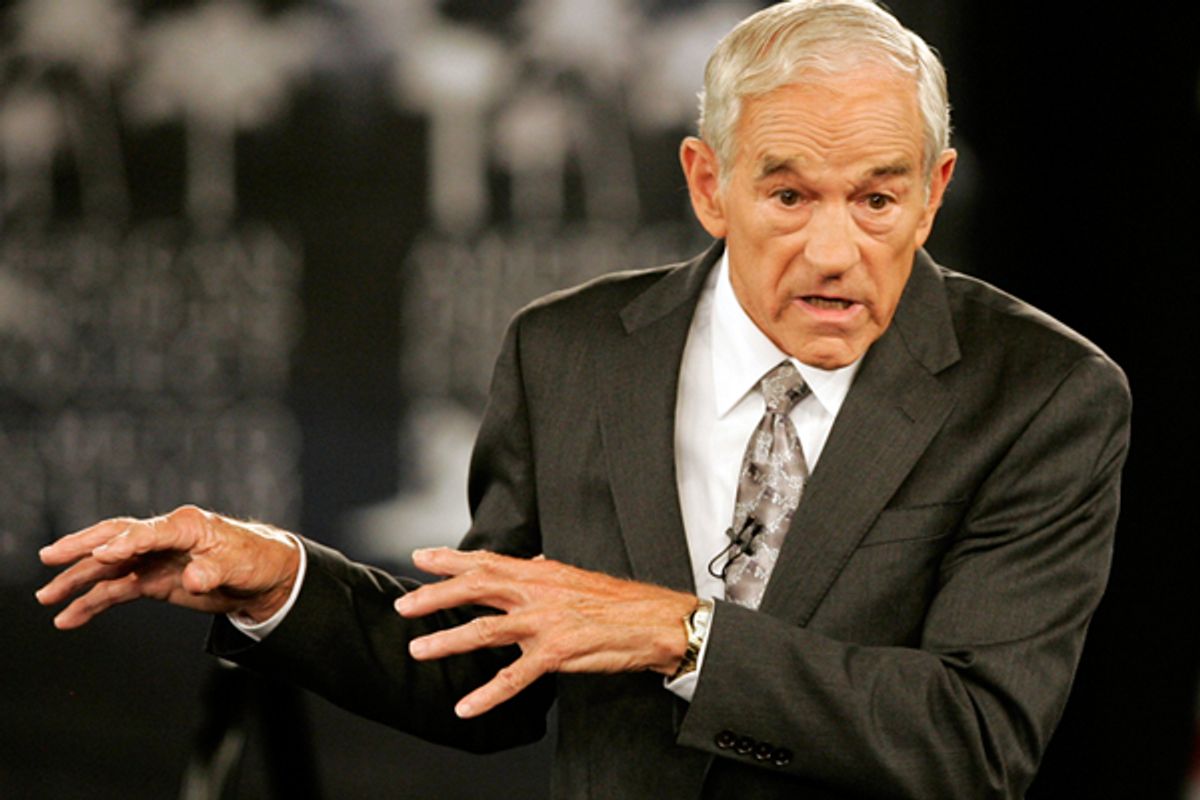 The Republican Party, falling deeper into the clutches of Ron Paul’s radical ideology, has a new item on its anti-populist agenda: Castrate the Federal Reserve so that it no longer can promote job growth.

In Fed-speak, this is known as cutting in half the Fed’s “dual mandate” to curb inflation and unemployment, by taking out the “unemployment” part — the nation's persistently high jobless rates notwithstanding. The ranking Republican on the Joint Economic Committee, Kevin Brady, disclosed this week that he is drafting legislation that would turn the Fed’s long-standing “dual mandate” into a single mandate.

This great leap backward isn’t likely to happen as Democrats remain in control of the Senate. But what it does show is the extent to which Ron Paul’s fixation with the Fed has infected the Republican Party. Anti-Fed rhetoric, once the province of ultra-right groups like the John Birch Society, has gone mainstream with the rise of Paul, who has been surging in the polls and now ranks third behind Mitt Romney and Newt Gingrich. He is actually leading in Iowa, and a victory there would really rev up his famously loyal followers.

It’s no secret that Paul wants to end the Fed. That’s the title of one of his books, and it’s central to his libertarian ideology, which is influenced by Ayn Rand, who opposed the Fed’s existence, and Austrian economists who championed laissez-faire. In January 2011 he became head of the House Financial Services subcommittee overseeing domestic monetary policy. Given Paul’s growing influence, it’s not surprising that Republicans are pushing for a measure that would cut back significantly on the Fed’s power. Bray's legislation amounts to “Ron Paul Lite.” The proposed law wouldn’t toss the Fed in the ashcan, as Paul wants, but it would go to the very heart of the Fed’s mission.

The dual mandate has been around since 1977, when the Federal Reserve Act was amended to require the Fed to strive to curb both unemployment and inflation. The operative language in the Federal Reserve Act, in its Section 2a, is as follows:  “The Board of Governors of the Federal Reserve System and the Federal Open Market Committee shall maintain long run growth of the monetary and credit aggregrates commensurate with the economy's long run potential to increase production, so as to promote effectively the goals of maximum employment, stable prices, and moderate long-term interest rates.”

What this means is that the Fed can’t just focus on inflation, but must take into consideration whether its policies will help or impede the functioning of the economy as a whole. Fed Chairman Ben Bernanke made that point in a speech to the CATO Institute in 2007. In other words, the dual mandate is just common sense. It’s not terribly controversial, either, unless you’re really indifferent to throwing people out of work.

Now, it has to be understood that Paul is not in favor of paring the dual mandate. As he pointed out when the idea surfaced in 2010, he thinks that’s a wimpy half-measure and “grandstanding.” The libertarian serial presidential candidate and faux populist doesn’t want the Fed to have any mandate — or power -- at all.

Some of the elements in Brady’s legislation, as it has been leaked to the press, are worthwhile. His bill would provide greater transparency for the Fed. The minutes of Fed meetings, now disclosed within three weeks, would be released in 15 days. Fed purists don’t like it, but it’s hard to see the harm in that. The bill would also open up the membership of the Fed’s Open Market Committee, which sets monetary policy, to representatives of all 12 regional Fed banks. Now the positions are primarily controlled by the president. That could actually backfire on the Republicans, because some of those regional bank presidents might want to keep the Fed focused on job creation, even if it’s ostensibly stripped of its ability to do so. If that part of the law is passed without the dual mandate, it might actually be a good thing.

The Fed needs more sunshine, especially when it comes to its actions during the 2008 financial crisis. The Fed has shamefully fought disclosing the details, which media organizations, especially Bloomberg, have been fighting. The January issue of Bloomberg Markets broke the story of  $13 billion in undisclosed Fed loans that were doled out to the banks.

But there’s a distinction between agitating to open the Fed to public view, or even throwing a bone to the right by “auditing” it, and getting rid of it entirely. With Paul ascendant, Fed-bashing is going to happen a lot in the months ahead, and it’s important to distinguish informed criticism from ideologically driven rhetoric.

Paul is a master of the latter. Here’s Paul on the Fed’s role in the financial crisis: “The Federal Reserve is the chief culprit behind the economic crisis. Its unchecked power to create endless amounts of money out of thin air brought us the boom and bust cycle and causes one financial bubble after another.” [Emphasis in the original] He goes on to point out that the dollar lost 93 percent of its value since the Federal Reserve was created in 1913.

What Paul ignores is that there were booms and busts and inflation long before there ever was a Federal Reserve. His claims dovetail with the right-wing counter-narrative of the financial crisis, which diverts attention from abuses by too-big-to-fail banks by focusing on government policies. But Paul goes further by retailing the conspiracist humbug that the Fed may have funded the Watergate burglars and Saddam Hussein’s nuclear program. Paul even pressed for an audit of the gold at Fort Knox, apparently to make sure that James Bond's nemesis, Auric Goldfinger, could not make off with the stocks.

A lot of this is symbolic posturing, as is usual where the Fed is concerned. The right has long been uncomfortable with the dual mandate. George F. Will, in a column back in 2010, contended that the dual mandate turns the Fed into the “fourth branch of government,” and cited criticism of the Fed’s job-boosting powers from Paul Ryan, now chairman of the House Budget Committee. Ryan was quoted as pushing the Ron Paul nostrum that what the Bureau of Engraving and Printing churns out is really “fiat money,” since it’s not backed by gold. Paul believes in a return to the gold standard, an idea that has been dismissed by economists for decades as guaranteeing a slide into another Great Depression.

Paul’s influence is metastasizing to the rest of the GOP field, who are falling over themselves to show that they’ll get tough with the Fed. Newt Gingrich has made attacks on the Fed part of his repertoire, suggesting that the Fed should be stripped of its banking powers and — taking aim at the dual mandate — focus entirely on strengthening the dollar. Rick Santorum also supports wiping out the dual mandate, and Michele Bachmann has made Paul-like noises, joining in the populist-sounding calls to audit the Fed — a symbolically powerful but otherwise meaningless idea that is one of Paul’s longtime talking points. (Gingrich is another “audit the Fed” fan.) Bachmann said in one debate that the Fed needs to be “shrunk back down to such a tight leash that they're going to squeak.”

The only holdout is Mitt Romney. This is one of the few issues about which he hasn’t flip-flopped — yet. He has generally avoided the subject, which has drawn fire from Fed critics.. But all of the GOP hopefuls, including Romney, would get rid of Bush appointee Ben Bernanke, ostensibly because he has promoted inflation but most of that is the lingering odor of the bailouts — not a terrible reason to eject the guy. Or at least it would be, if he served at the pleasure of the president, which he doesn’t. His term as chairman expires in early 2014. Assuming he’d leave if asked to do so, his replacement in a GOP administration would probably be in the mold of Alan Greenspan, a fiscal conservative and inflation-buster who did his darndest to subvert financial regulation whenever possible.

What we can say for sure is that a Republican victory in 2012 would probably spell the end of the dual mandate, in fact if not by law, reducing or eliminating the Fed’s role in reviving the job market. A Great Depression wouldn’t arrive immediately, as it would if the gold standard were revived as Paul wants. But if true economic calamity threatens, you can bet that a GOP-controlled Fed won’t do a thing to stop it from coming.