The most insufferable Christmas song ever

Not "Last Christmas" or "Wonderful Christmas Time." It's the smug and egomaniacal "Do They Know It's Christmas?" 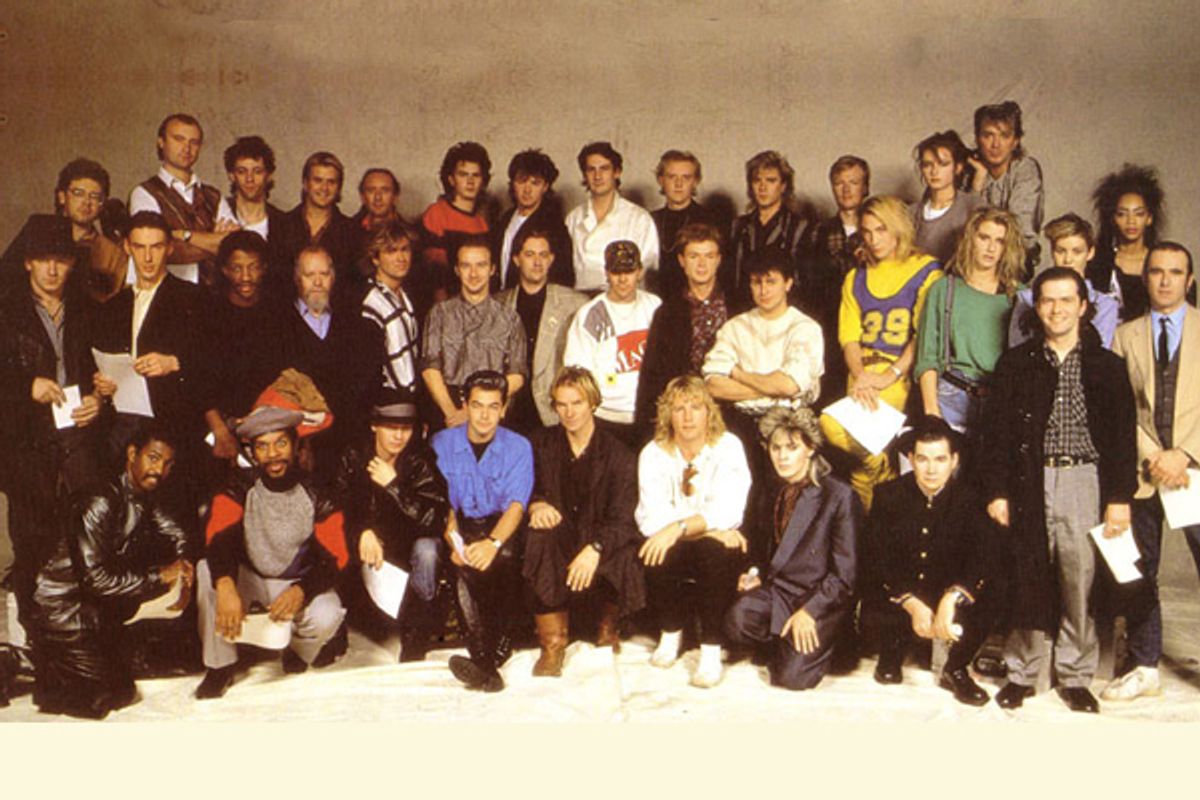 When "Do They Know It's Christmas?" came out in 1984, I pretty much thought I was British. I dressed like the asexual keyboard player from the Cure, pretended to love everything Depeche Mode was singing about – because, you know, people are people – and pledged undying love for bands I read about in the obscure British magazines sold at Tower Records. (In fact, only since getting Spotify have I even heard an entire album by the Blue Nile and, it turns out they sound like every other band I pretended to like in the 1980s, except for Belouis Some, who were terrible on a whole other level.) So "Do They Know It's Christmas?" combined all of the greatest things in my world:

3. British bands singing morosely about hungry people in Africa, a place I was familiar with primarily through playing Risk, but which I nevertheless felt a great passion for. We must get these people fed, the world kept telling my 13-year-old self, and therefore I, too, felt this very strongly ... for about two months, anyway, because puberty was making me very interested in a whole host of other things.

At any rate, I loved "Do They Know It's Christmas?" and routinely waited for hours for the video to show up on MTV or "Night Flight" or "Friday Night Videos," hoping against hope that I'd get to see the extremely moving vision of Boy George dressed like an advertisement for bulky women's housecoats (watch the video, people) or see the plaintive look in Sting's eyes as he sang the word "sting" (again, check the video, it's a moment of utter grace). But what I especially loved was the righteous anger of Bono shrilling, "Well, tonight thank God it's them instead of you ..." So powerful, so wise!

It wasn't until this month, however, 27 years in the dust -- the song such an oldie it can be performed on "Glee" -- when the song came on the radio that it dawned on me what a dick line that is. It got me thinking about the song in its entirety and what I've determined is that, of all the Christmas songs, it's really the most fucked-up one that doesn't have to do with the systematic bullying of a red-nosed reindeer. And so I present an annotated guide to how utterly corrupt "Do They Know It's Christmas?" is, in line-by-line fashion:

"It's Christmas time,
there's no need to be afraid."

Really? No need to be afraid? Does cancer stop on Christmas? What about prostate exams? Have you even pondered how frightening it would be if you were sitting in your living room on the evening of Dec. 24 and heard something coming out of your fireplace and before your wondering eyes appeared some lunatic in a red suit? What about getting the shit stomped out of you at Walmart? No need to be afraid? You lie, Bob Geldof!

"At Christmas time
we let in light and banish shade"

OK, now, as it relates to Africa, wouldn't shade actually be a better gift?

"And in our world of plenty
we can spread a smile of Joy
Throw your arms around the world
at Christmas time."

Unless, of course, you try to throw your arms around a place that doesn't celebrate Christmas -- like, you know, large parts of Africa -- and instead of spreading joy, you end up starting 25 years of sectarian civil war.

"But say a prayer,
Pray for the other ones."

I'm gonna go ahead and presume "the other ones" are the godless heathens ...

"At Christmas time it's hard
but when you're having fun ..."

Like, say, if you're Simon LeBon and you've spent the last 12 months sleeping with supermodels, or you're Boy George and you just got done shooting up some great smack, or you're the other guy in Wham! and you're just biding your time until the gig is up and you can marry one of those boxy Bananarama girls and race cars for the rest of your life ...

Technically, the world outside, at the time of the song’s recording, was a London street -- and in the video it looks like it was filled with fans who wanted everyone’s autographb... and, in fact, according to the video, it looked like everyone was having a pretty smashing time.

"Where the only water flowing is
the bitter sting of tears"

Oh, for fuck's sake. Sting sings this line in what is a fantastic merging of the real world and the world where a guy named Gordon gets to name himself Stingb... and then gets to, ironically, sing the word “sting” but make it, you know, really serious, because it’s a dreary allusion to how dry it happened to be in Africa that year.

Just so we're clear here, if they don't know it's Christmas, why would they have Christmas bells? And why ring in the doom when they are clearly already doomed? Wouldn't doom just walk right in at this point? No bells needed.

"Well, tonight thank God it's them instead of you."

Ah, yes, the crux of it all. If there's one thing the Bible teaches, it's that you should thank God for other people's suffering. Now Bono is a goddamn hero, we're told, since he's spent the last 30 years standing on moral high ground – a moral high ground paved with the money of kids like me, who didn't know what the fuck “Sunday Bloody Sunday” was all about, but who were, like, totally in support of it – though one has to think he could have looked at the line before he sang it and suggested a rewrite. Maybe something along the lines of "Well, tonight thank God you have food and clean water and a slight disposable income which allows you the opportunity to buy this great song on the latest technology ... the cassette tape! Get thee to Sam Goody!" If this song were written today, Justin Bieber would certainly have something wise to say, like, I dunno, "Well, tonight thank God you're not a Kardashian."

"And there won't be snow in Africa this Christmas time"

This is egregiously stupid. It never snows in Africa during Christmastime, because it’s the summertime there. Most specifically in Ethiopia – which is what this song is actually about, the famine in Ethiopia – it’s the start of the driest season. And it’s not as if people were starving in, say, South Africa, or else why would everyone have to get together a few months later to pledge that they ain’t gonna play Sun City? – but beyond that, it just doesn't snow in Ethiopia. Ever.

"The greatest gift they'll get this year is life."

A shitty fucking life, as you've made abundantly clear!

"Ohh....
Where nothing ever grows
No rain or rivers flow
Do they know it's Christmas time at all?"

No, because they are starving to death. And also, depending upon where they are in Ethiopia, they may very well be Muslim.

"Here's to you...
Raise a glass for everyone
Here's to them
Underneath that burning sun
Do they know it's Christmas time at all?"

How grand. These rich former colonial oppressors are raising a glass to the Africans, who don't even have any fucking water! You're just sipping on wine like it's nothing! You bastards! Send over a bottle of water!

And here the real, dark truth of the song reveals itself. It’s not just about feeding the Africans, it’s about feeding the world and, in addition, letting the entire world know it’s Christmastime. This happened once before. It was called the Crusades.

All that said, still love the song. For real. Very catchy.