John Boehner and the real meaning of "leading from behind" 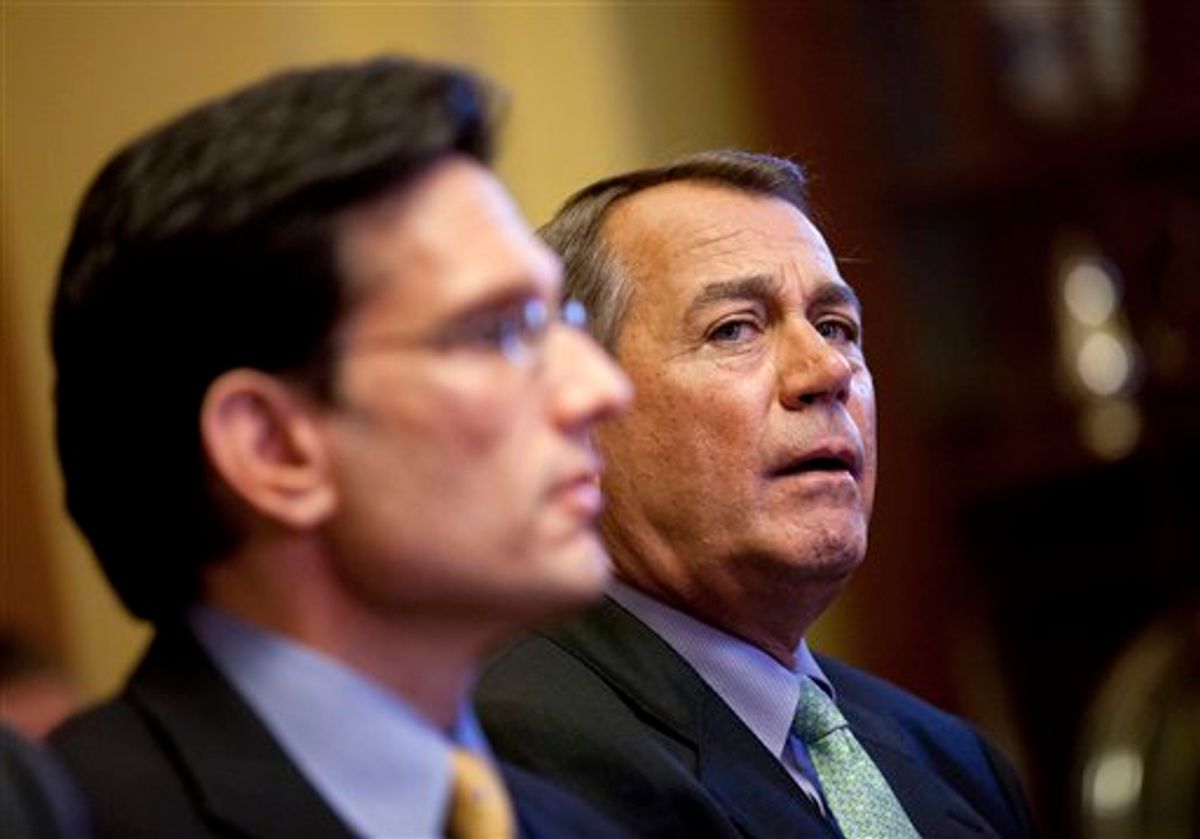 The term "leading from behind," uttered to the New Yorker's Ryan Lizza earlier this year by an unnamed Obama adviser who was trying to explain the president's approach to removing Moammar Gadhafi from power, was quickly embraced by the right as the perfect description of the "shocking passivity" and "hesitation, delay and indecision" that they badly want to believe defines the president's foreign policy.

That Obama's Libya policy actually achieved its basic goal took some of the bite out of this line of attack -- which is probably for the best, because "leading from behind," as the right uses the term, is a far more apt description of the style of another top leader in Washington: John Boehner.

The House speaker's handling of the payroll tax standoff, which should end this morning with House Republicans accepting a plan that they rebelled against earlier in the week, has been the embodiment of impotent leadership. But then, that's the story of his year-long tenure as speaker: When it comes to deciding what direction the GOP conference will take, Boehner is the one taking orders, not giving them.

This was painfully evident earlier this week, when the payroll tax impasse turned into a full-scale crisis after rank-and-file House Republicans decided they couldn't live with the bipartisan compromise struck by the Senate. That compromise, negotiated by Harry Reid and Mitch McConnell and ratified by an 89-10 vote last weekend, had been hashed out with the understanding that House Republicans would abide by whatever McConnell could come up with. This was the understanding because McConnell had kept Boehner in the loop during his discussions with Reid and because Boehner publicly said, "If the Senate acts, I’m committed to bringing the House back — we can do it within 24 hours — to deal with whatever the Senate does.”

It made sense that both Boehner and McConnell, as party leaders and Capitol Hill veterans, would be eager to resolve the issue and pass a payroll tax cut extension. Obama was loudly calling for an extension and itching to blame any further inaction on GOP obstructionism, which has already badly harmed the party's standing with voters this year. But when Boehner took the plan to his fellow House Republicans, they resisted it bitterly. This, too, made sense, given that the House's GOP ranks are now filled with anti-Washington, anti-compromise, Tea Party-friendly absolutists -- members who are naturally suspicious of Boehner, an 11-term incumbent and veteran deal-maker. Add in the fact that even non-absolutist House Republicans now live in fear of Tea Party-inspired primary challenges, and Boehner had no way of forcing the deal through. If he even tried to get tough, he'd face a furious backlash. The Tea Party crowd didn't want the compromise, so Boehner had to say he didn't want it either, and the crisis was born.

But that's only half the story of Boehner's weakness. What's even more remarkable is how insignificant he was in finally convincing enough House conservatives to change their minds and essentially allow the original Senate compromise to pass. For that about-face, Boehner can thank influential conservative voices like the Wall Street Journal editorial page and Karl Rove along with some angry Republican senators (to say nothing of the actual constituents to whom Republican members would have to explain an average tax hike of $1,000 per family if the cuts aren't extended). As of late Thursday morning, Boehner was still doing the Tea Party's bidding -- or what he thought was the Tea Party's bidding -- and insisting that the Senate compromise was a small business-killing atrocity. Immediately after that press conference, McConnell put out a statement that essentially demanded that House Republicans relent, and only then did the holdouts begin speaking out -- at which point Boehner once again changed his tune.

This is the essence of "leading from behind" in the sense that Obama's critics use the term. And by necessity it has marked Boehner's approach to his job this year, whether on the debt ceiling showdown this summer (when he was compelled by a similar rebellion to walk away from"grand bargain" talk with Obama) or on negotiations over a continuing budget resolution back in the spring that nearly forced a government shutdown. The speaker simply has no leverage with his conference. He is haunted, day in and day out, by the knowledge that one wrong move could lead to a coup from the purists. So whenever there's a tough call to be made, he lets them make it.