How the feds fueled the militarization of police 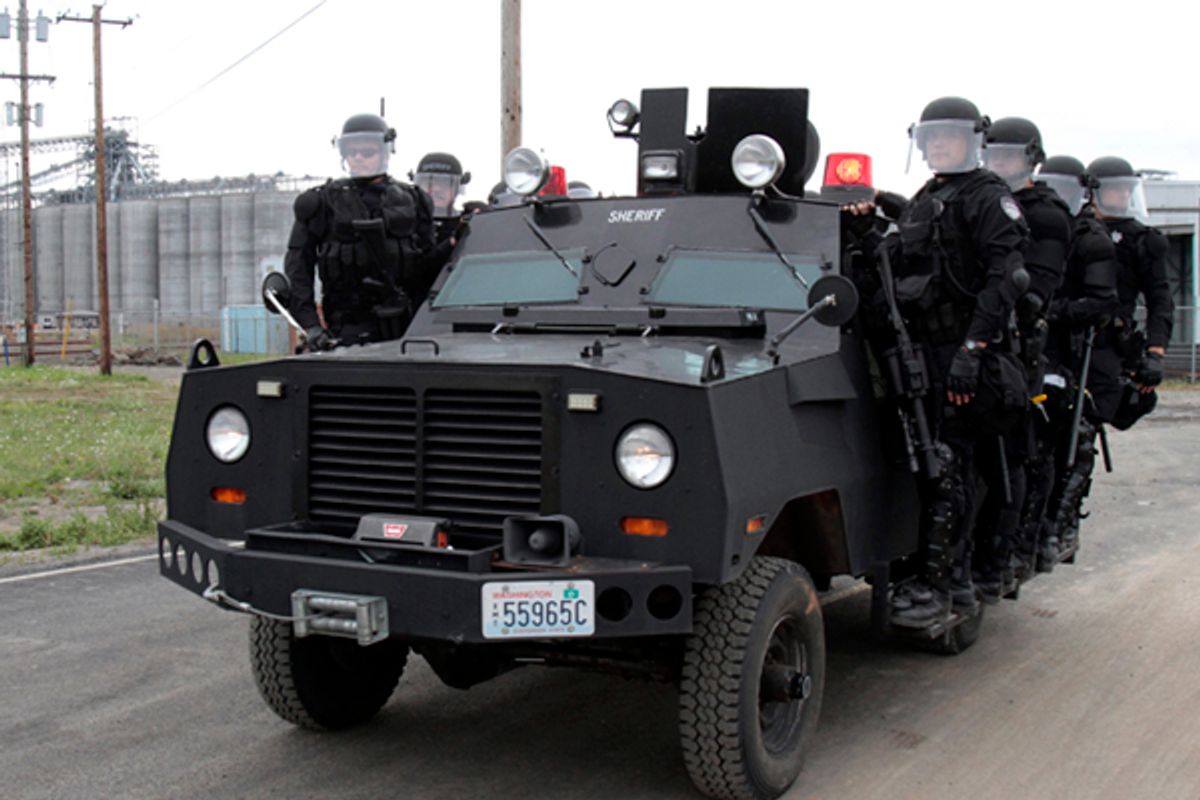 The militarization of America's metropolitan police forces was on full display in recent months as police from Los Angeles to New York cracked down on Occupy protests, decked out in full SWAT gear and occasionally using strange pieces of military hardware.

Less well known is that police forces in small towns and far-flung cities have also been stocking up on heavy equipment in the years since Sept. 11, 2001.

In spite of strained city and state budgets in local years, the trend has continued thanks to generous federal grants. According to a new story by the Center for Investigative Reporting, $34 billion in federal grant money has financed the past decade's shopping spree.

To learn more about the trend, I spoke with G.W. Schultz, who co-authored the story with Andrew Becker. (Also worth a look is the slide show accompanying the story.)

You start your piece with Fargo, N.D., where the police have a "$256,643 armored truck, complete with a rotating turret," kevlar helmets and assault rifles in their squad cars. What did they say when you asked why they need this kind of heavy equipment?

Their view is that they need to be as prepared as a city like New York. We've been studying the grant programs for a while. You see this in city after city. Everyone has got an explanation for why they need more and not less grant money. I grew up in Tulsa; there's still a lot of sensitivity around the Oklahoma City bombing. So the attitude is, "Look, we could have a similar attack and we need to be ready for it." Now I live in Austin. The attitude here is, we could have an incident like the one in which a guy smashed his plane into the IRS building a few years ago, or the one in which a guy started shooting people from a tower at the Uniersity of Texas a few decades ago. Every city has an answer like that. The approach to security spending is based on speculation about what could happen, however remote. That attitude enables you to buy everything without limit because you can never attain 100 percent security.

What is the federal grant program that is handing out all this money?

What we learned over time is that it's not just one grant program, it's grant programs. There is a dizzying array of grants that local communities are eligible for from the Department of Homeland Security and sometimes the Justice Department. A few grants existed prior to 9/11. After DHS was created, Congress kept creating new programs to meet perceived needs around security. For example, "We need a bulletproof vehicle to send in our SWAT unit if a Mumbai-style attack occurs." That led to a spree of spending on bulletproof vehicles. Each round of purchases is fueled by a what-if scenario.

You write in your piece that there's a lot of information still lacking about this spending. What don't we know?

We've been working on this Homeland Security research for a few years. The feds have never had a listing of everything the local police and other local government agencies bought with the grant money. You literally can't go to Washington and find a listing of how the $34 billion was spent; you have to go state by state. We set out to do that; after a period of many months, we still only have records from 41 states, and they are wildly inconsistent. We wanted to build a nationwide database of how the money was spent, but there turned out to be just no way to do it because of the lack of information. But we spent so much time with grant records, we were able to identify trends; we knew many communities were buying SWAT-style trucks, combat-style protective gear, and so on.

Has most of this equipment -- assault rifles and armored vehicles and so on -- just not been used?

It's hard to tell. We can say from available audits that a lot of the equipment purchased with grant funds is not used. As the years pass by, you see more people in government concede that particularly during the early years after 9/11, a lot of the stuff that was bought was never used, and a lot of money was wasted. I was recently at a small public safety summit in Austin and the chief of police here rhetorically asked the audience, "All the protective attire that you bought after 9/11 for a chemical attack, have you used any of that?" And the room kind of giggled a little bit. In the end there's still an attitude in law enforcement and the government that it could be used and we need to be prepared.

Who is making money off of all this?

Well, defense contractors are not manufacturing F-35s or big ships for local cops. But these companies and Wall Street in general think in terms of diversity. They want small profit margins and large profit margins. Companies like Northrop Grumman have sold a lot of bomb-dismantling robots to local police. Some traditional defense contractors like Raytheon have also gotten into the intelligence side, selling things like information-sharing tools and radio equipment. I went to a conference a few weeks ago where Raytheon had a big presence, offering expensive communications equipment for dispatchers and so on.

It's important to point out you can't buy guns with Homeland Security grants -- but it's about the only thing you can't buy. That's a restriction the feds decided to place early on. But if a local police department can take care of some of the capabilities they believe they need to have with grants, that leaves money to buy things like AR-15s. In the 10 years since 9/11, they've done both -- both combat-style SWAT attire and assault rifles. That's partly why you see images now of SWAT police looking very much like combat troops in Baghdad or Kabul.

Are there any dissenting voices within the police community about all this militarization?

There are even folks in the SWAT community -- some of the older folks who have observed the evolution of SWAT -- who are concerned about this. They're concerned about whether or not the training is going to meet all the equipment that's being bought. Part of the reason for that is the training is not as sexy as the equipment. The image and romance of battling bad guys with lots of tough-looking equipment and guns maybe isn't as exciting as investing in training. There's also concern among some police about deploying tactical units too often -- for low-risk warrant executions and things like that. But, the counter-voice in law enforcement is, "Look, this enhances safety for officers." They look back at a couple of really bad shootings and say, "We're never going to let that happen again. We're going to get whatever equipment or training we need." But that comes at a cost.

Does it make police look more intimidating to be wielding AR-15s with all kinds of devices attached to them? Especially in a country that's been working for years to implement community policing strategies. In a place like Los Angeles, there were years of work done to soften the image of law enforcement and improve the department's relationship with minority communities. Is that threatened by the wider adoption of combat stye equipment and training?