Whether on Facebook or in statehouses, gay rights has momentum. Can pro-choicers borrow their successful tactics? 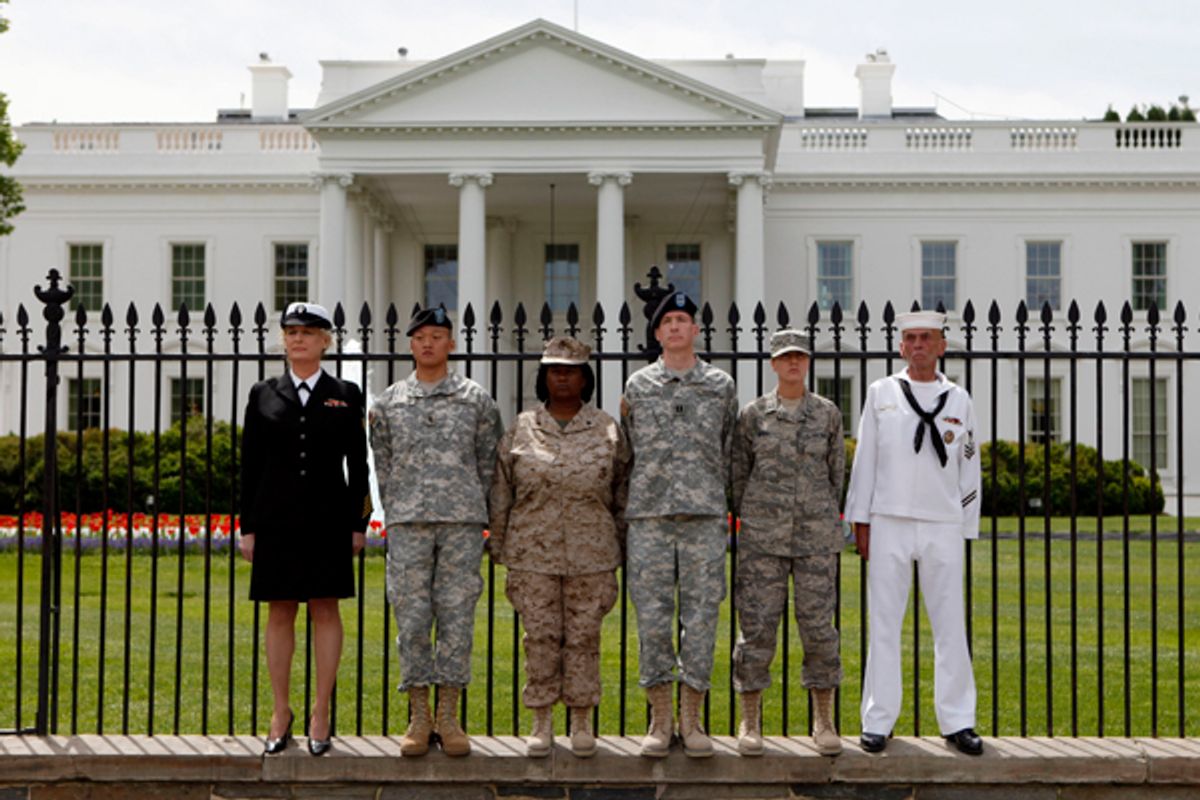 It's happened to Newt Gingrich, and he responded calmly. Michele Bachmann gets it again and again. Mitt Romney learned the hard way in a New Hampshire diner.

It seems that everywhere the Republican hopefuls go, they're confronted by supporters of gay rights, who may or may not themselves be gay. And every time it happens, their equivocations or evasions or sputtering give birth to another viral moment, primed for Facebook sharing and coalescing around the view that the Republicans are hopelessly out of touch on an issue of growing consensus. That narrative gets reinforced even without the candidates' help -- just last week, there was the instantly iconic image of a sailor, first off the ship, passionately kissing her partner, and the enduring popularity of Zach Wahls' earnest speech about his mothers before the Iowa Legislature.

You know what I've never seen someone confront a Republican candidate about, with maybe one exception? The fact that four of them have signed the so-called Personhood pledge to wholly ban abortion and many common forms of birth control, or that five of them have vowed to defund Planned Parenthood, which provides basic health services to literally millions of women under the Title X program. The only recent viral video I can remember that deals with reproductive rights was U.S. Rep. Jackie Speier saying on the House floor in February that she had terminated a wanted pregnancy with serious complications. Combined traffic tallies at every publicly measured place where this video was posted suggest it had a fraction of the views of the others.

Such cathartic, confrontational moments aren't the whole picture, but they're emblematic of the sort of enthusiasm and grass-roots engagement that the gay rights movement has seen this year, and not coincidentally, they've come along with real legislative momentum. It's hard to disagree that this year was "the best year for gays ever." The Obama administration certainly would like that word out there, since it's steadily building a case that it's done more for gay rights in three years than anyone else did in eight. (Not that there's very much competition on that front, given that the two most-targeted policies, "don't ask, don't tell" and the Defense of Marriage Act, were put in place by our last Democratic president.)

At the same time, the administration seems far less concerned with the case it's going to make to women on reproductive rights. The Plan B debacle, with its flagrant contempt for both objective public health values and women, has proved a sort of tipping point for disappointed feminists, who are having discussions both privately and publicly about the weakness of Democratic support for reproductive rights, often looking enviously at the sort of leverage gay rights activists have generated.

To be clear: This is not a women versus gay people dichotomy -- there are, of course, lesbians as well as gay men who want to marry their partners, serve openly in the military, or be protected against discrimination, something quite visible in those viral moments too. (In fact, discharges under "don't ask, don't tell" tended to disproportionately affect women, and women of color in particular.) But it is instructive to contrast the statuses of these overlapping causes and wonder why, generally speaking, reproductive rights lacks the spontaneous creativity and popular coalescence the gay rights movement has seen lately. It's a question of some urgency, not only because of the presidential election, but because of the recent, intensified wave of anti-choice legislation in the states.

The differences between the issues surely inform the administration's calculations, at least in part. For one thing, the youngest generation of voters can't understand what the fuss is all about when it comes to denying gay people equal rights, but may be more divided about abortion. According to a study by the Public Religion Research Institute in June, “on the issue of abortion, Millennials mirror their parents’ views, with about 6-in-10 saying abortion should be legal in all or most cases. But they are much more supportive than their parents of allowing gay and lesbian couples to marry. This suggests that we may see these issues moving on separate tracks in the future.”

That generation has grown up not only without the memory of when abortion was illegal, but also with the legacy of decades of anti-choice rhetoric stigmatizing abortion. They may not take seriously the anti-choice movement's goals to ban abortion absolutely and at least some forms of contraception along with it. In pop culture, of course, even as being gay has been justifiably normalized in more and more fictional scenarios, abortion has all but disappeared.

There’s also the urgency involved: Abortion is still legal (for now). It's easier to rally against an outright prohibition, like a federal act that actively discriminates against gay people, including ones whose unions are recognized by their home states. Very rarely is an outright abortion ban on the table, though that's obviously the ultimate goal, and it's harder to rally around, say, medically irrelevant restrictions on clinics, or waiting periods and ultrasound laws, which are harder to explain as succinctly. As Amanda Marcotte pointed out in an earlier discussion on this front, gay rights activists' victories, such as HIV/AIDS-related activism, also lost some of their verve. "As the demands were actually met to a degree, the radical activism faded away -- the radical pro-choice movement that had ACT UP-style actions faded away after abortion was legalized, and ACT UP hasn’t really been raiding places in a long time, now that HIV is taken seriously as a public health issue," she wrote.

In that vein, a frequent criticism of pro-choice and feminist groups is that they’re too interested in access and cozying up to elected officials who in turn take them for granted. But whether or not the gay rights cause is better served by its official organizations (which helpfully include the likes of the Log Cabin Republicans), activism on this year's key issues has clearly run the gamut from official lobbying and donor pressure to old-fashioned confrontational tactics like chaining yourself to the White House gate and getting arrested.  And while there are certainly donors motivated by pro-choice values, most of the burdens of antiabortion legislation fall on the poorest and most vulnerable women -- who are also less likely to be able to mobilize. As they did pre-Roe, wealthier women will nearly always be able to access the services they need. But both "don't ask, don't tell" (when it existed) and the Defense of Marriage Act affect people of every income and education level, from enlisted service members to West Point cadets, from the average Joe to, say, David Geffen.

Marriage and openly serving in the military, as many have pointed out, are fundamentally conservative, institution-friendly goals, whereas the right to terminate a pregnancy is still stigmatized as anti-family or a threat to traditional values. Given that roughly one in three women will have an abortion before age 45, most of them already mothers, and that 99 percent of us have used contraception, that's a lot of women to condemn. What would it take for one of them to walk up to one of the candidates and defy them to call her a bad mother or a bad woman? With a camera-phone nearby, of course.