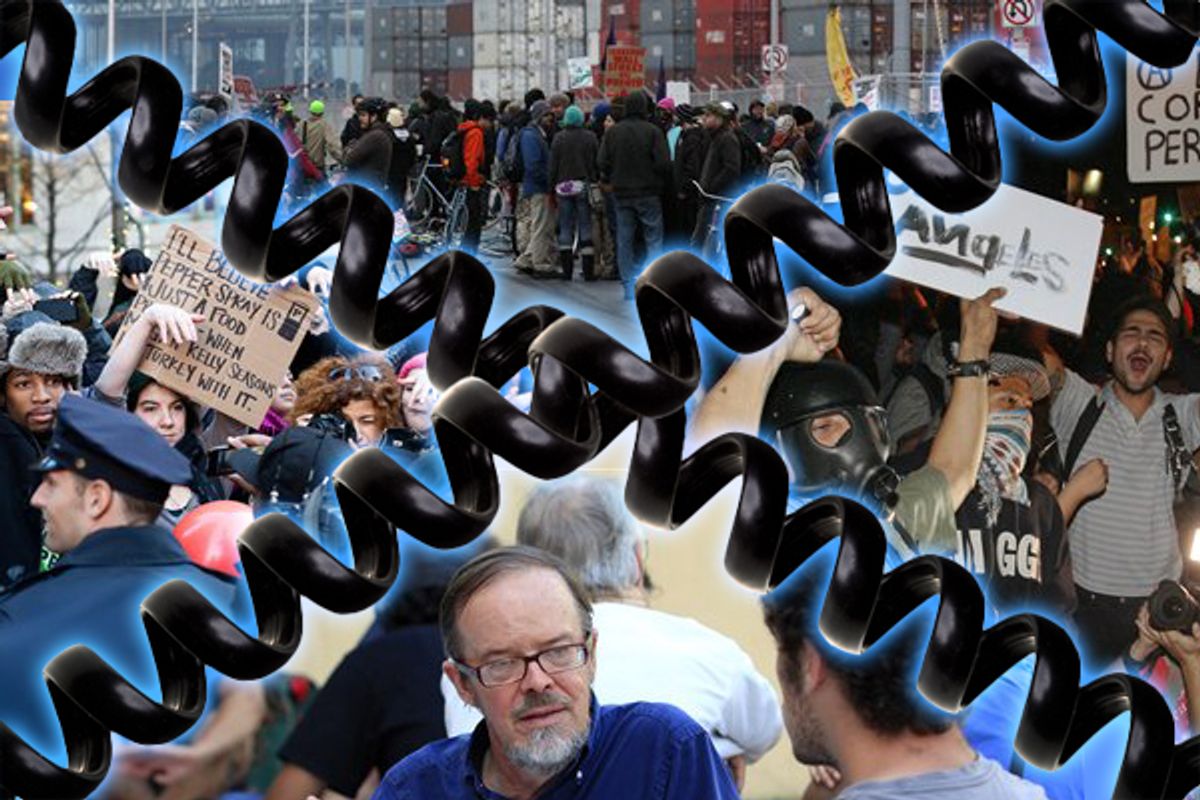 Local occupations around the country are linking up through frequent, massive conference calls, tightening what is now an extremely loose national network that operates under the Occupy banner into a more focused force.

The effort, now known as InterOccupy, started out of Occupy Wall Street in New York in mid-October. It has since grown into an elaborate website with multiple weekly phone calls during which occupiers trade ideas, coordinate multistate actions, and plan for the future. Participants at about 150 occupations around the country (and a few internationally) have now participated in the calls, organizers tell me.

"The [weekly] national calls have brought people together, including people who are otherwise isolated in their own occupations,” says Nate Kleinman, an Occupy Philly participant and InterOccupy organizer. “There's usually a strong particular culture at individual occupations. It's immensely valuable to have a place once a week where people come together from across the country and share ideas and their hopes for what the movement can accomplish.”

On Dec. 12, Occupy protesters on the West Coast held a day to “shut down Wall Street on the waterfront,” resulting in the partial closure of several ports. In the two weeks before the protests, there were six InterOccupy conference calls in which representatives from 25 occupations planned the day of action, according to Joan Donovan, an InterOccupy organizer and Occupy Los Angeles participant. Those calls covered everything from coordination of the timing of protests up and down the coast to lessons learned from Oakland organizers from a previous port demonstration to strategies to minimize arrests, she said.

I listened in on a recent general call and came away with two impressions: Despite the reduction in media coverage of the Occupy movement after the initial burst of interest and the evictions of physical occupations, there is an efflorescence of activism happening around the country that didn’t exist just a few months ago. And occupiers are planning and organizing in many directions at once.

The calls are run by InterOccupy facilitators on a system called MaestroConference, which allows for both voting by phone and smaller breakout calls in the middle of a larger call. The process mimics the consensus-based general assemblies that were popularized at physical occupations around the country. Maestro has some other useful features, like the ability to forward to an organizer the email addresses of participants interested in a particular idea who press a designated button on their phones.

The calls, which typically involve on the order of 100 participants, begin with announcements and reports on developments around the country. On the general call I was on, the reports were from the InterOccupy media group, the InterOccupy tech group, occupiers in Washington and Tacoma who had protested the National Defense Authorization Act, an announcement of planned summer meetings, and brief comments on the anniversary of the self-immolation of Mohamed Bouazizi, the Tunisian man credited with setting off the Arab Spring.

Participants then proposed smaller breakout discussions that lasted for 20 minutes before reports back to the full group. Participants select the discussion they want to join by pressing a number on their phones. The five most popular breakout discussions were alternative actions beyond protests, winning the rest of the 99 percent, fundraising tactics, how to bring general assemblies into residential neighborhoods, and electoral reform.

That’s just the weekly general call, which takes two hours and is held each Monday night. In a recent week, besides the general call, there were specialized InterOccupy calls for members of direct-action working groups around the country; for members of media groups; for those interested in an Occupy Wiki project; for facilitators of the calls; for anyone interested in “helping Occupy migrate into structured political activism”;  for occupiers in Texas; and for those interested in helping Washington state longshoremen in a labor battle.

David Karpf, a professor at Rutgers who studies political networks, says the InterOccupy calls are an example of what are known as mundane mobilization tools.

"Conference calls are not magical shiny new objects on the Internet," says Karpf. Nevertheless, they seem to be much more useful than say, a Facebook page. "You adopt these well-standardized, well-diffused technologies in order to make your organizing a lot more effective," he says.

Because Occupy is such a decentralized phenomenon, it’s difficult if not impossible to measure how many people are involved and whether the movement is shrinking or growing. There are some recent signs that momentum has waned -- such as the precipitate drop in the rate of donations to Occupy in New York. But several people involved in organizing InterOccupy told me the experience has made them hopeful that Occupy is still going strong.

Donovan, the Occupy L.A. organizer, notes that at the end of some of the general calls everyone’s line is opened so they can shout out where they are calling from. "I remember on one call people saying goodbye from Italy, and Hawaii, and Alabama. And I just thought, ‘Oh my goodness!’ You just get astounded that everyone is thinking the same thoughts," she says.

If there’s a chance that Occupy will be a sustained movement next year and beyond, these calls are a key area to watch. Says Donovan: “We're going to be laying those wires between people all winter long. In the spring everyone is going to be motivated and ready to act. If the job situation stays as it is, all they're going to have on their hands is time. There's going to be nothing but room for protest and dissent and creativity. "