How the media made Ron Paul 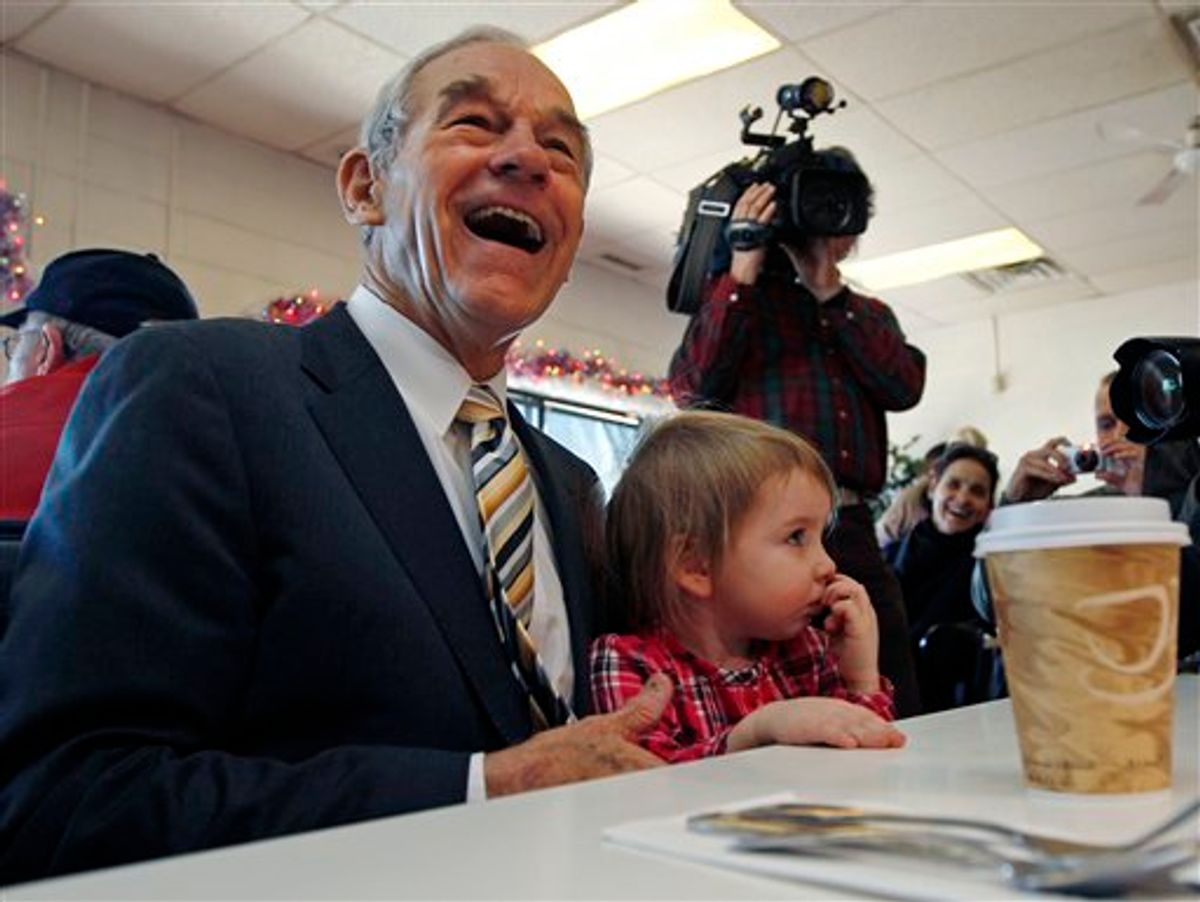 Ask just about any candidate's hardcore supporters whether the media is giving their guy a fair shake and chances are you'll be greeted with an emphatic "No!" and all sorts of supposedly egregious examples to prove the point.

But this sentiment is particularly pronounced among Ron Paul's backers, who have flooded message boards, comments sections and journalist inboxes all year with claims that the press is essentially conspiring to ignore the Texas congressman and his libertarian message -- and that the only thing separating him from front-runner status in the GOP presidential race is a level of coverage commensurate with the other major candidates.

The Paul-ites haven't been entirely wrong. It's now clear that Paul has significantly expanded his support from four years ago, could win Iowa (and maybe even New Hampshire), and is positioned to gobble up a significant chunk of delegates and perhaps give his party's establishment the scare of a lifetime. But even though the warning signs have been there for months, the press didn't seem to notice until very recently. What Paul's loyalists haven't appreciated, though, is how helpful -- vital even -- the media's lack of interest has been to their candidate's rise.

Just consider the current uproar over the racist political newsletters that were sent out under Paul's name (and used to fund his political activities) in the early 1990s. The story is hardly new, but to many voters it feels new because -- like Paul himself -- it's been ignored by the press all year.

This is a perk of being dismissed by the press as a fringe figure. In 1996, when he made his comeback bid for a House seat in Texas, Paul briefly had to confront the newsletters, but once he was elected and became an entrenched incumbent, the issue was largely dropped by the local press (old news) and ignored by the national media, who saw him as just a gadfly backbencher. And when he ran for president in 2008, it didn't come up until very late in the cycle, when some staggering fundraising numbers briefly compelled the political world to notice him. But almost as soon as it exploded back then, the story went away, with the media regarding Paul's relatively weak early primary showings as proof that his base of support was very loud and very narrow and that he wasn't worth taking seriously.

And that, more or less, was how the media treated Paul's current campaign until the past few weeks.

In a way, this was understandably infuriating to Paul and his supporters. Over the summer, for instance, he nearly won the Iowa straw poll, netting the third most votes in the event's history -- evidence, in hindsight, that he really had grown his Iowa support since '08. But reporters and commentators (present company included) were largely dismissive of the accomplishment, seeing it mainly as further, unneeded proof of the devotion of Paul's army and not a sign that something might be stirring.

But the virtual press blackout also meant that the newsletters weren't being mentioned, and that Paul wasn't facing the intense day-to-day scrutiny that took a toll on other GOP candidates when they enjoyed breakthrough moments this year. It allowed him to present himself to audiences on his own terms and helped him become something of a sympathetic figure. In effect, Paul was able to take advantage of the many  nontraditional means of communicating with voters that now exist without those voters being subjected to screaming mainstream press headlines about Paul controversies and gaffes. How many of the new supporters Paul gained these past few years didn't know anything about the newsletters until this month?

Paul has argued that major media outlets have ignored him because they are "frightened" by his unconventional views, particularly his foreign policy noninterventionism. This is not a baseless assertion, but it's probably overstated. Certainly, a compelling case can be made that the most important media entity in Republican politics, Fox News, has gone out of its way to treat Paul as a nobody because of his rejection of the GOP's "war on terror" orthodoxy.

But for most of the political press, the explanation is simpler: Paul's noninterventionism (and the blatant hostility toward him from key GOP voices like Fox) imposes a unique ceiling on his intraparty support and makes it very easy to dismiss him as a serious contender for the nomination. The experience of 2008, when Paul briefly succeeded in making the press second-guess itself only to wind up an asterisk in the primary season, reinforced this impression. To his credit, Paul once again forced media second-guessing this time around, with his rise to first place in Iowa polling this month -- a development that almost immediately prompted Fox News to change gears and shower attention on him and his newsletters and for the rest of the political media to pursue the newsletter story as well, with disastrous results for Paul.

This saga could cost Paul much of the new support he's won since '08, will make expanding his base much further all but impossible (even if he does win Iowa next week), and will probably cement his status as a fringe figure. The fallout will be more permanent than it was in 2008 or in 1996 because this time the whole political world is watching. And the reason the whole political world is watching is because Paul managed to reach polling heights that no one believed were possible. And he only reached those polling heights because from January 2008 until December 2011 the media pretty much ignored him.