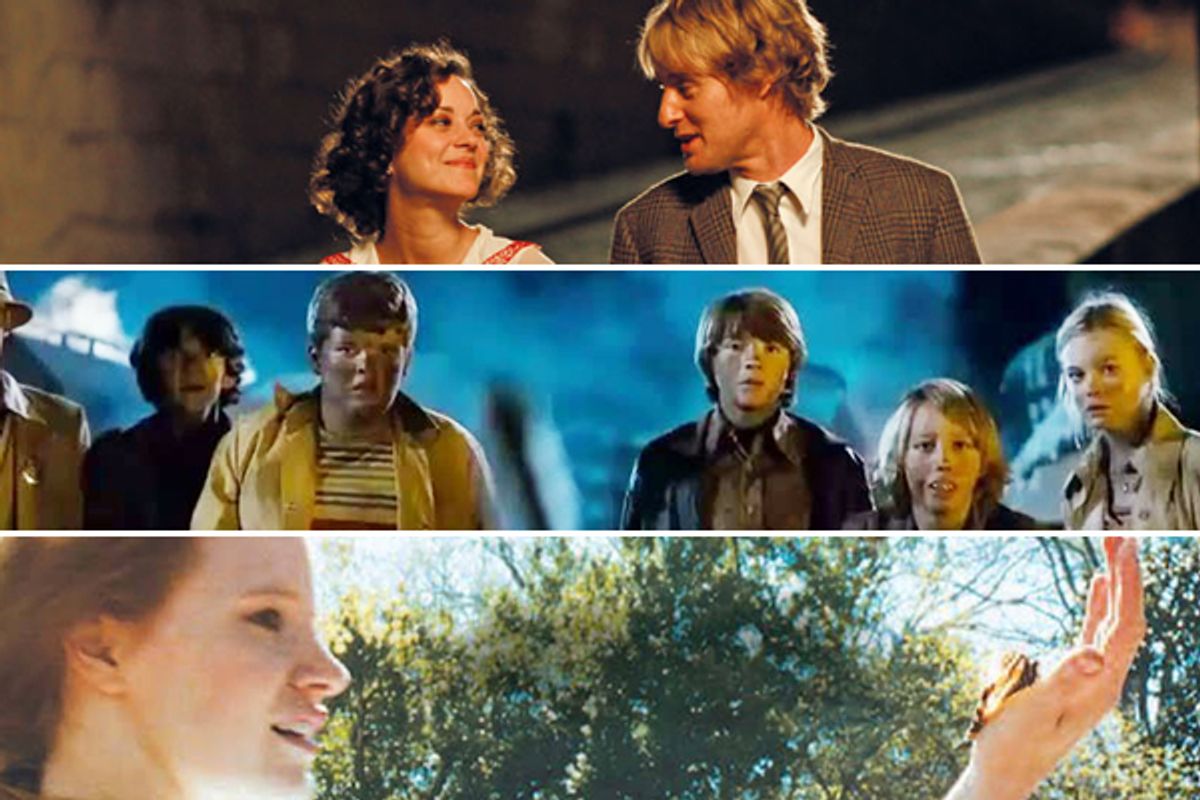 "Nostalgia is denial -- denial of the painful present," says a philosopher (Michael Sheen) in Woody Allen's surprise hit "Midnight in Paris." "The name for this denial is Golden Age thinking: the erroneous notion that a different time period is better than the one [that] one's living in. It's a flaw in the romantic imagination of those people who find it difficult to cope with the present."

If nostalgia is indeed a flaw, it's one that many 2011 films and TV programs shared. Some of the year's most talked-about movies and shows gave themselves over to some form of nostalgia -- unabashedly reveling in, and idealizing, not just an earlier time, but the artists and artistic styles that we associate with that time, and the rush of emotion that accompanies our fantasies of same. Allen's "Midnight in Paris" -- his top grossing movie ever -- is Exhibit A. It's an immensely likable reworking of his short story "A Twenties Memory" in which an Allen stand-in, screenwriter Gil (Owen Wilson), magically gets to travel back to the time of Ernest Hemingway and Gertrude Stein. But it's merely the keynote address in a year of budget-busting, production-design-showcasing, time-tripping cinema and television, a year that invited viewers not merely to experience stories from another time but to slip into them with deep pleasure and savor their restorative power.

"Midnight in Paris," "The Tree of Life," "Super 8," "The Artist," "Tinker Tailor Soldier Spy," "Hugo" and "The War Horse" were all, to some extent, about nostalgia -- about wrapping oneself in the texture of some glorious past, be it an earlier period in a character's own life or an earlier era in filmmaking. Some of the highest-profile TV -- successful and unsuccessful -- had nostalgia on the brain, wallowing in luxurious sets, costumes, hairstyles, music and slang from the early- and mid-20th century -- even as they repeatedly told and showed us that things weren't so great Back Then, whenever Back Then was. The short list includes the glossy but unsuccessful network series "The Playboy Club" and "Pan Am," HBO's "Mildred Pierce" and "Boardwalk Empire," ReelzChannel's "The Kennedys," PBS' "Downton Abbey" and "Brideshead Revisited" and "The Hours." That "Midnight in Paris" quote sums then all up rather nicely. Superficially they're all so different that it seems crazy to group them together -- they vary in setting from the very early 20th century to the early '60s, and their tones are all over the map: dramatic, melodramatic, droll, shticky, tragic, horrific, you name it.

But there's something basic and significant connecting all of them, and I think the connection is more aesthetic than historical. It is, as Paul said, about the need to escape the present, and not so much about the particular of the past that's being escaped into. It's about tactility -- a fear that the virtual world is displacing the real one, and a corresponding conviction that a cinematic or televised re-creation of the past -- however stylized or "unreal" -- can feel somehow more real than whatever we're living through now.

To borrow a literary analogy, the texts of these productions were often overwhelmed by the illustrations; even as the plotlines showed us how cruel life could be, and how ignorant and venal the characters were, the viewer's eye still feasted on those dresses! Those hats! Those cars! Those hissing vinyl records spinning on those elegant Victrolas! And of course the white beams of light slicing through cigarette-befogged darkness in movie theaters and casting black-and-white images up on big screens, images shots on honest-to-God film.

Martin Scorsese's "Hugo" and Michel Hazanavicius's "The Artist" both worshiped, even fetishized silent cinema, or more accurately, the idea of silent cinema, and the era that spawned it: a time of steam engines and big black automobiles and stony-faced men in hats and long coats. Like the boozy, smoky, wood-and-wool-and-brass tableaux of "Mildred Pierce" and "Boardwalk Empire" and ABC's intriguing if ultimately unsuccessful "Pan Am," these films were not so much about the historical particulars of a time or place as the re-created, fantasized texture of it. Anything prior to the 1990s could still be considered a remnant of the Industrial or Machine Age, an epoch in which things were physical and present -- when they were indisputably and obviously there, and not some incredible digital simulation; when some person, or some machine run by people, made things, and when even popular culture was something you could touch, or that you at least knew you could touch: a book, a film, a record. Until as recently as 10 years ago, even television was shot on tape, and could (in a pinch) be cut on tape, with a razor blade and tape -- just like film, or a construction paper collage.

That's all gone now, or going away soon: This was the year that major camera manufacturers announced that they would no longer make new motion picture film cameras. This same year we learned that the days of film itself were numbered. Some sources claim it will be extinct by 2015. Major distributors just don't see the point of producing it any longer, now that everything is being shot, edited and shown digitally. Major studios announced that they would begin phasing out rentals of actual film prints, because it was too expensive and bothersome to store, maintain and ship them -- and besides, now that everything has been converted to ones and zeroes, what's the point?

This was also the year that we started to hear very serious rumblings about the end of media as a physical object that one could hold in one's hand: not just the vinyl records and 35mm film prints that old timers like yours truly love to blather on about, but the supposedly more cold and forbidding late 20th century versions, such as videotapes and CDs and DVDs. Those are on their way out, too, if reports -- and the maneuverings of industry giants such as Netflix -- are to be believed. It'll all be virtual soon, an endless stream of data held on gigantic servers in undisclosed locations and "licensed" to us for private use on our computers and mobile devices and perhaps soon in the chips that will be installed on the brain stem of every American newborn, along with the port that allows them to jack into the Matrix.

"All men fear death," says Ernest Hemingway in "Midnight in Paris." "It's a natural fear that consumes us all. We fear death because we feel that we haven't loved well enough or loved at all, which ultimately are one and the same." The film's tone is rather jokey as he says this, but from the intensity in his eyes you can tell he's not kidding -- and if you read the words in plain black-and-white, divested of lush celluloid images and piquant music, it sure does feel like a line from a manifesto, or a lament.

Allen ultimately deflates the very nostalgia that his movie indulges; the film's comic climax takes Gil and his girlfriend Adriana, a '20s Frenchwoman, back to Paris during the Belle Epoque era, the period that she worships as brazenly as Gil worships the Paris of her own time. "I'm from the '20s, and I'm telling you the golden age is la Belle Epoque," she insists. But really: "Midnight in Paris" is not a hit because of the director's clear-headed attitude about the blind worship of earlier, supposedly more interesting times. It's a hit because of the clothes, the music, the cultural references and the comic star power of the Paris writers and artists we've read about in school. It's a hit because it's a warm bath in another era, and a blessed escape from this one.

J.J. Abrams' Steven Spielberg pastiche "Super 8" was not merely a paean to the filmmaker's adolescence in the late '70s and early '80s -- an era that spawned such early Spielberg classics as "Jaws" and "Close Encounters" and "Raiders of the Lost Ark" and "E.T." -- but a valentine to the last great age of analog media, the Carter-Reagan-Bush I era, when records were on vinyl and films were shot on film, and both could be looked at, lifted, touched. Abrams went so crazy re-creating Spielbergian, late'70s lens flares that there were times when the actors' faces were partly obscured by horizontal bands of blue light. A telling moment at a drugstore showed the teenage hero waiting to get his Super 8mm film back; in the days -- days!! -- leading up to that glorious moment, he looked as anxious as a young father in some mid-20th century sitcom, pacing around in a hospital waiting room and smoking cigarette after cigarette until the doctor arrived with the good news. And while Abrams' "Super 8" was playing in multiplexes this past summer, Spielberg himself was finishing his epic "War Horse," which is set during World War I but strains to evoke the shots, camera moves, music, pacing and tone of a 1940s Hollywood prestige picture. (During a recent New York preview screening, Spielberg said he was hugely influenced by 1940s John Ford films, particularly "She Wore a Yellow Ribbon" and "How Green Was My Valley.")

"You'll never be a great writer if you fear dying," Hemingway tells Gil in "Midnight in Paris." "Do you?"

A more ruminative, searching, open-ended take could be found in Terrence Malick's "The Tree of Life," a Proustian reverie by way of suburban Texas in the 1950s and '60s. To watch this movie is to be completely immersed in the mind of another person: ostensibly the narrator, Jack (Sean Penn), but really Malick himself, a generous filmmaker who seems to be remembering his own past because he can't remember anyone else's. It's a tough movie in some ways, filled with confusion, pain, regret and messy Oedipal resentments and desires. But ultimately the look and sound of the film eclipses all of that. What predominates is an overwhelming, at times helpless-seeming urge to escape this horrible, sterile modern prison of virtual being-and-nothingness, and go back to a more casually physical time, a time when you could stay outside all day and all night without your parents worrying about your being raped or doped up or kidnapped by sex slavers or organ thieves or converted to Shariah Law or whatever bugaboo is obsessing modern parents at this very moment; a time when you could fall down and scab your knees, tear-ass through woods and vacant lots, roll around in grass, even strap a poor frog to a rocket and then feel horrible about it later, then come home and clean the dirt out from under your fingernails and sit down to supper with Mom and Dad, who maybe didn't know quite what to do with you, and perhaps even resented you at times, but loved you unconditionally.

Well, maybe not your parents, but somebody's.

"The Tree of Life" ends on a beach that might represent the afterlife or that might simply be a metaphorical or figurative space -- a place where all Jack's most beloved fellow beings can gather in one place and just be loved, admired, embraced. It's a place where the virtual becomes real and the dead return to us, if only for a moment. A place where everything is beautiful and nothing hurts.

"That's what the present is," Gil says in "Paris," responding to the quote that opens this article. "It's a little unsatisfying because life is unsatisfying."