The evangelist predicted the world would end in 2011 -- twice. As Rick Perry might say, "Oops." We have his diary 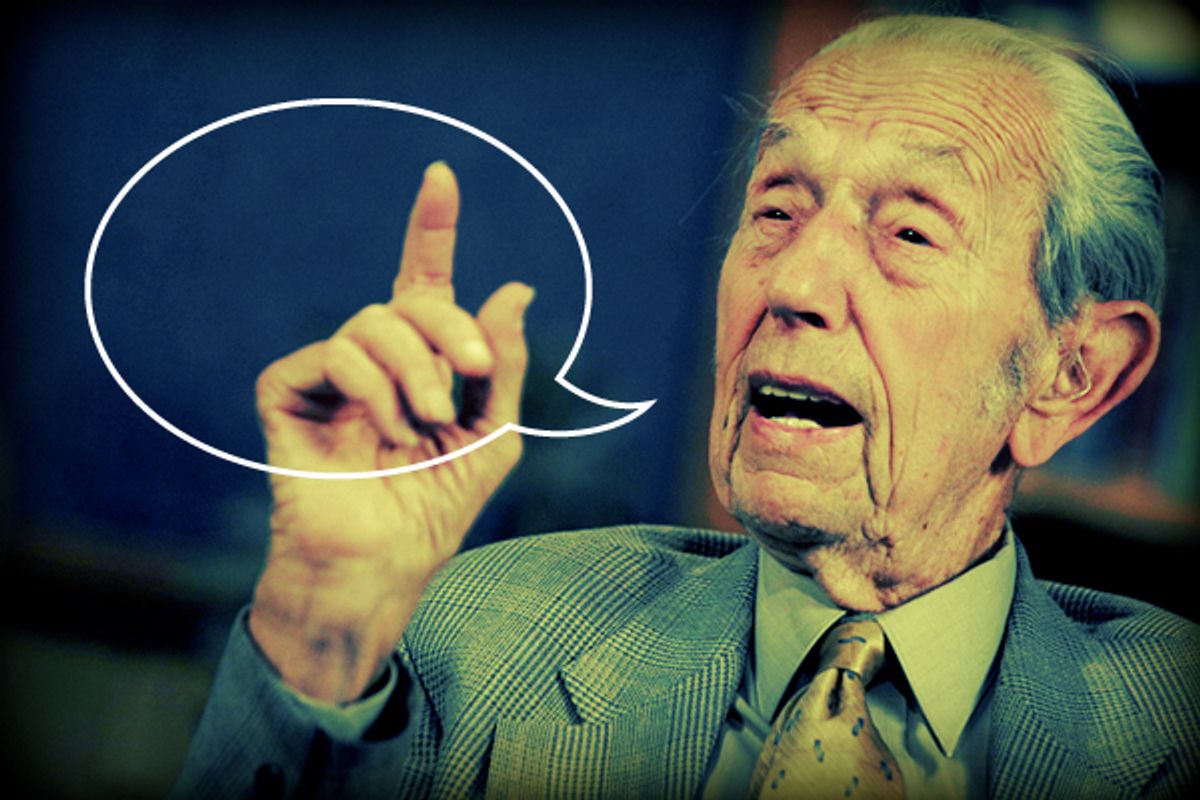 I strongly suspect that 2011 is going to be a very bad year.

Unassailable premise No. 2: God allowed Noah seven days to atone before he destroyed the world.

All right, Harold, take a deep breath. Let’s simplify things. In the Bible, as everyone knows, “atonement” equals the number 5. “Completeness” is 10. “Heaven” is 17. What happens if you multiply atonement by completeness by heaven, and then square it? You get 722,500. I have a feeling this number is going to be important.

I just fell off my chair.

Right. What’s 51 days after April 1, 2011? Get me the calendar. Can someone help me back onto my chair? Nurse? That’s better. You are a good nurse.

I’m still in pain from falling off my chair. An 89-year-old man is able to bear only so much. The rapture can’t come fast enough.

We must spare no expense on billboards. What use do we have for money now? I want a billboard on every mile of every highway in America.

Too expensive? Very well. Let’s buy one billboard on I-680, just before exit 53. You know, right after Jack in the Box, and before Chik-fil-A?

No, not next to Del Taco. Del Taco is on the other side of the highway. I’m referring to the Chik-fil-A side.

The billboard should advertise our radio show. It should say: Judgment Day: May 21. The Bible Guarantees It.

Wait—I was thinking of the Del Taco side. Yes, we must put our billboard on the side of Del Taco.

It is too bad the world is ending because Family Radio is really beginning to make a lot of money. No matter, we shall spend the money on billboards. Judgment Day: May 21. Read It and Weep... for Forgiveness.

Please, Lord, don’t let me get this wrong. I’ve checked the math, but what if I’ve made an error? What if the end of the world comes before May 21?

My back continues to malign me.

When I awoke this morning, my daughter, bless her soul, told me that I had made a miscalculation. She said that the earth would in fact not be destroyed for another 6 billion years. I panicked until she explained that she only was making an “April Fools’ joke.”

I explained to her that the only fools in this world are unrepentant sinners. Come May 21, the joke will be on them.

Soon there will be lightnings, voices, thunderings, and great hail. There will be a mighty earthquake. The sun will become black like sackcloth made of goat hair. The moon will become as blood. Hark the locusts with scorpion tails and the faces of men; the horses with lion faces; the six-winged beasts, full of eyes; the great red dragon, with ten horns and seven heads and seven crowns upon his seven heads.

The nonbelievers are going to feel really dumb when the locusts with human faces start running after them.

Nothing makes an 89-year-old man feel young again like the End Times. Finally some relief for my back. Here we go. Oh boy. Here we go. Hallelujah.

I’m having a stroke.

My prophecy came true: 2011 really was a bad year.

Nathaniel Rich is the author of the novel "The Mayor's Tongue," and a contributor to Harper's, the New York Times, The Believer, Rolling Stone and many other magazines.

2011 Fiction: Behind The Headlines Books