GOP pols and pundits now attack the surging libertarian\'s racist newsletters, but what took them so long? 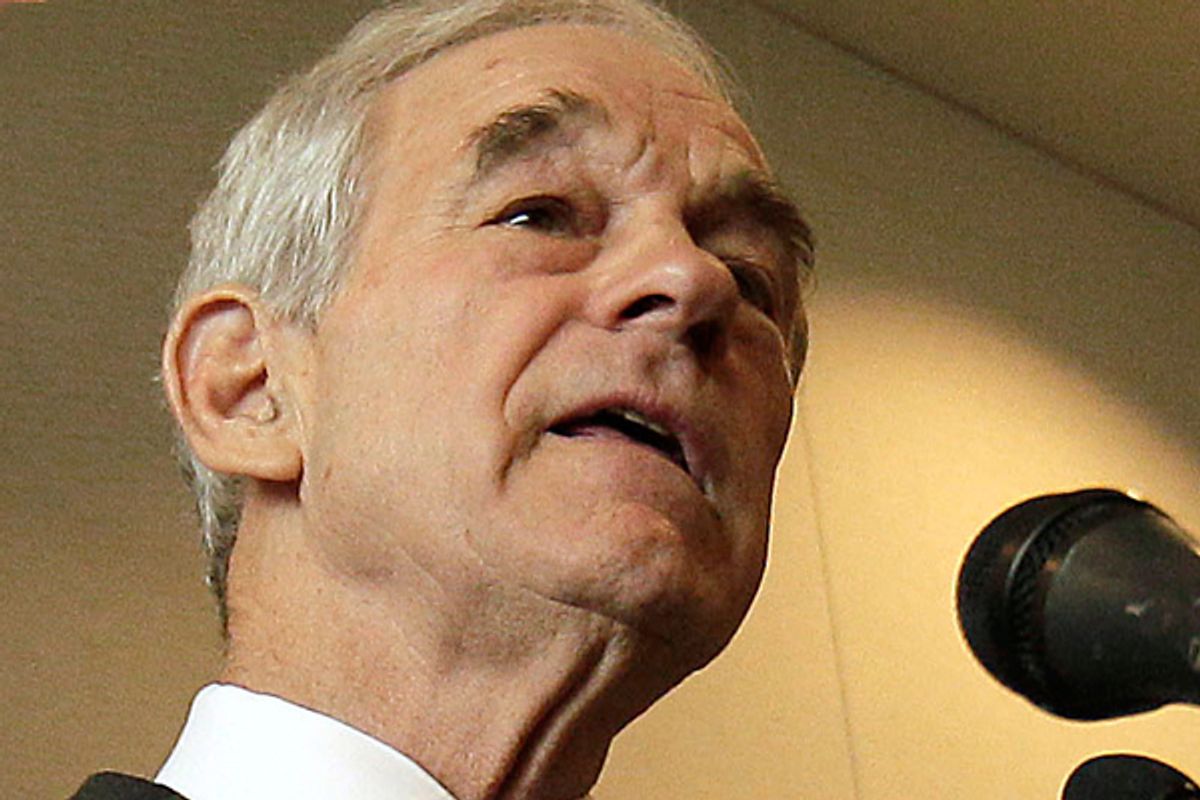 I have a shard of sympathy for Rep. Ron Paul and his supporters, now that the former gadfly presidential candidate looks capable of an Iowa caucus victory. The sudden attention to Paul's ugly newsletters, especially on the right, is a little suspicious, since they aren't news; their racism and anti-Semitism were exposed in 2008, and even earlier.

In January 2008 the New Republic ran the most thorough exposé of the hateful opinions published under Paul's name – that the Los Angeles riots stopped only "when it came time for the blacks to pick up their welfare checks," that the Rev. Dr. Martin Luther King Jr. "seduced underage girls and boys" and the national holiday to honor him was "Hate Whitey Day," plus various screeds blaming crime on African-Americans – and Reason revealed that Paul mined far-right groups like Holocaust denier Willis Carto's Liberty Lobby to build his mailing list. But the newsletter controversy, along with Paul's hateful friends, drew the attention and wrath of mainstream conservative opinion leaders only when Paul began to surge in the polls.

Bill Kristol's Weekly Standard got the writer of TNR's 2008 piece, James Kirchick, to reprise his old story and update it. Subbing for Rush Limbaugh, Mark Steyn denounced Paul's "sheer stupid half-witted parochialism" as well as his attack on King as a pedophile. Steyn argues that Paul's strategy of insisting he didn't know his newsletters published racist garbage meant he "shouldn't be entrusted with the government of the United States." Now Newt Gingrich is saying he won't vote for Paul in the unlikely event that Paul is the GOP nominee facing President Obama next November.

But the GOP's belated denunciation of Paul's newsletter fiasco feels insincere, and that's because it is. Paul's biggest sin on the establishment right is his rejection of America's wars of empire as well as its staunch military and economic support for Israel, and the higher he rises in the polls, the more important it is, especially for the neoconservative wing of the GOP, to defeat him.

Paul's bracing foreign-policy stands led Andrew Sullivan to endorse him, with reservations, for the GOP nomination. But the snowballing scandal around his newsletter racism led Sullivan to retract his endorsement on Monday. "I just cannot see how he can be such a president without explaining away the newsletters convincingly," he wrote, while adding, "I don't think he's a racist; in fact, I think he's one of the least racially aware politicians I've come across in a long while."

Sullivan remains too quick to accept Paul's assurances that he didn't write or authorize the newsletters' most loathsome views, and that he denounces the hateful racial and anti-Semitic views they sometimes expressed. Even if we accept Paul's excuses – and I don't entirely – it's shocking that he didn't have anyone around him to clue him in to the hateful views going out under his name. Friends don't let friends send out racist newsletters, unless said friends aren't entirely shocked by such views. I also think being "one of the least racially aware politicians I've come across" is problematic in someone who wants to be president of a multiracial society still divided by race.

But in fact, Paul's relationship with his newsletters' racism is even more complicated than Sullivan allows. Paul's story about the newsletters has shifted over the years. As Think Progress outlined Tuesday, there was a time when the Texas libertarian tried to defend some of the racist views they expressed, back during his 1996 congressional campaign.

He told the Houston Chronicle that the newsletters' comments about African-Americans reflected "current events and statistical reports of the time." He defended a remark about black street criminals being particularly "fleet of foot" by noting that "if you try to catch someone that has stolen a purse from you, there is no chance to catch them." Asked about a newsletter calling the late Rep. Barbara Jordan a "moron" and a "fraud," Paul said "such opinions represented our clear philosophical difference."

Most important, Paul didn't claim that someone else had authored the newsletters back then. He didn't give that excuse until a 2001 interview with the Texas Monthly, when he told a reporter: "I could never say this in the campaign, but those words weren’t really written by me." And it wasn't until 2008 when he explicitly denounced the newsletters' racist views, saying, "I have never uttered such words and denounce such small-minded thoughts." Now he's insisting not only that he didn't write any of those words but that he never even read them. I'm sorry, but that strains credulity. Think Progress also notes that Paul was the only member of Congress to vote against awarding the Congressional Gold Medal to civil rights pioneer Rosa Parks. In my opinion, that singular, stubborn, mean-spirited vote alone should disqualify him from being president.

I'm glad that GOP politicians and thought leaders are finally speaking out against the racist views in Paul's newsletters, whether he authored them or negligently allowed them to go out under his name. But excuse me if I don't take their sudden horror at racism and racial dog whistles entirely seriously. Virtually the entire party has tolerated the crude Birther hoax, the claim that our first black president wasn't born in this country and is ineligible to be president, which seems at least partly inspired by racial hostility.  Gingrich has called Obama "the food stamp president" and denounced his nonexistent "Kenyan anti-colonial mentality."

Only last week on Fox, the Media Research Center's Brent Bozell – a Ron Paul critic, by the way – attacked MSNBC's Chris Matthews for saying Newt Gingrich looks like a "car bomber" by asking what would happen if a Fox host said Obama looked like "a skinny ghetto crackhead." Lest anyone think that was merely a rhetorical device, Bozell added, "which, by the way, you might want to say that Barack Obama does." There's been no rush on the right to attack Bozell.

So yes, Ron Paul deserves to be denounced for many of the views expressed in his paranoid, racist, anti-Semitic, pro-militia, anti-government newsletters. But he deserved to be denounced for those views long before he became the front-runner in Iowa. I am enjoying the spectacle of Bill Kristol, by the way, the man who brought us Sarah Palin, once again taking to the pages of his magazine to beg someone, anyone, to enter the GOP primary and save him from Mitt Romney. These people have wrecked their party, and they'd wreck the country if given a chance.