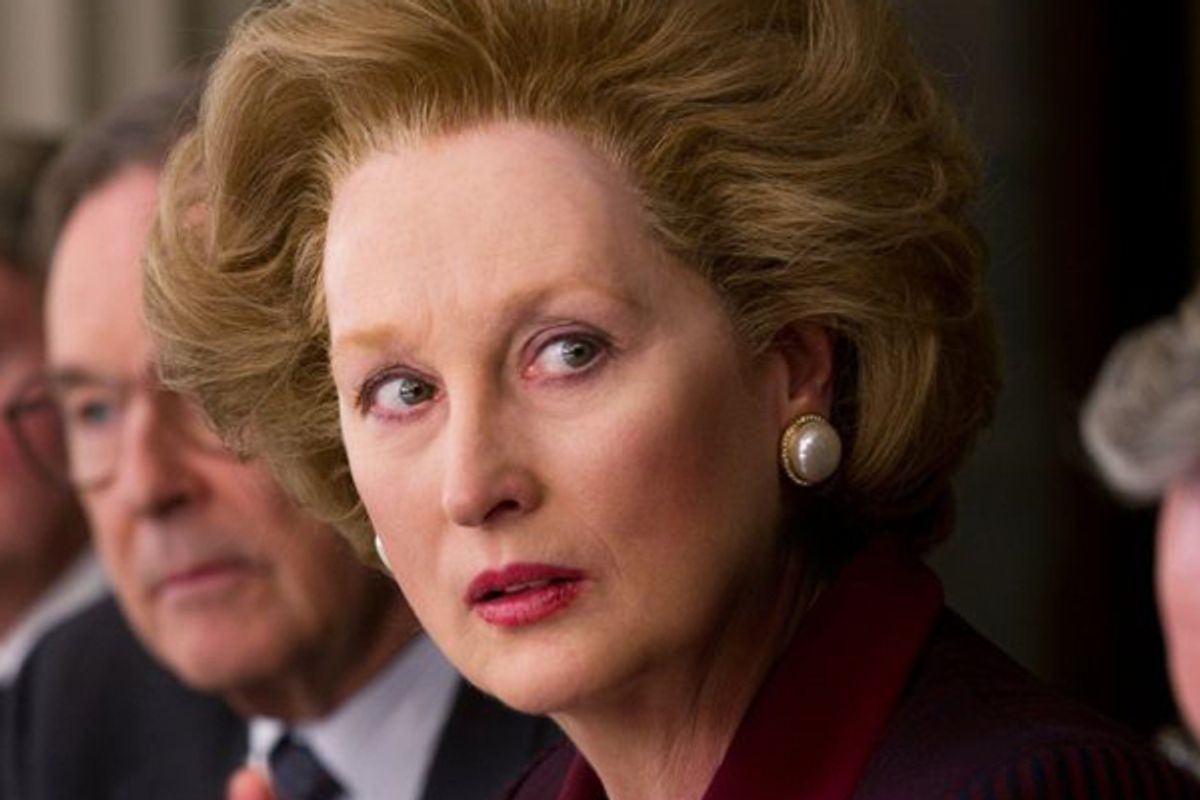 Meryl Streep as Margaret Thatcher in "The Iron Lady"
--

It's easy to take Meryl Streep for granted, and to view her uncanny ability to disappear inside virtually any kind of character as a form of shtick or a parlor trick. It's perfectly true that Streep has an appetite for larger-than-life characters and a natural instinct for showmanship, and that she's often at her best in mediocre or even sloppy films. But we shouldn't allow that to obscure the fact that she's one of the greatest stage and screen actresses of her time, or anybody else's time. (Indeed, Streep is something like the female Laurence Olivier, with the proviso that she made a far smoother transition to movie stardom than Sir Larry did.)

Streep is so powerful as Margaret Thatcher in director Phyllida Lloyd's "The Iron Lady" that she made me believe I understood the legendary and ferocious former British prime minister much better than I had before. That may be an illusion, of course; Streep does not know Thatcher personally, and neither do you or I. But it's really all you can ask from an actor playing a historical personage, especially one whose significance is so immense and whose legacy is so disputed. This Maggie Thatcher -- played by Streep as the mature politician and by Alexandra Roach as the young Maggie Roberts, a grocer's daughter from Lincolnshire -- is in many ways a sympathetic and admirable character, a woman of indomitable will, enormous ambition and profound personal convictions. Those qualities are also shown as driving her to sociopathic extremes, and to a megalomaniacal conception of herself as embodying all the noblest British qualities and single-handedly saving the British nation from socialist doom.

I find that a highly plausible interpretation of Thatcher as an individual, who had to overcome both the inherent sexism of British politics and society and also the ingrained snobbishness of her beloved Conservative Party. (Tory politicians customarily came from the landed gentry and the titans of industry, not the lower-middle shopkeeping bourgeoisie.) She could be as dismissive of any womanly talk about emotions and feelings as she was with pinko abstractions like "society" (although her assertion that there is no such thing does not appear in Abi Morgan's screenplay). The film's present tense is around 2009, when the widowed Baroness Thatcher, in her mid-80s, is struggling with senile dementia but has lost none of her flinty intelligence. When some faintly patronizing younger woman comes down to Thatcher's level, schoolteacher-style, and thanks her for creating opportunities for other women, Maggie does not appear interested in the gender-studies claptrap. "It used to be about trying to do something," she says disdainfully.

If I enjoyed "The Iron Lady" more than Clint Eastwood's "J. Edgar," that's not to say it's necessarily a better film. It's largely about how much more charismatic and enjoyable Streep is than the woefully miscast Leonardo DiCaprio. Both pictures adhere closely to standard biopic formula, turning contentious historical figures into the subjects of routine domestic melodrama while playing a highlight reel of major 20th-century events in the background: strikes, riots, bombings, hunger strikes, the Berlin Wall. It's massively ironic that Streep's Thatcher tells another interlocutor that no one seems to care about ideas anymore, since "The Iron Lady" is entirely bereft of them.

Oh, we get that young Maggie Roberts inherited her belief in individual effort and limited government from her upstanding dad -- who was a local politician for the centrist Liberal Party, in its waning years -- but no mention is made, for instance, of her encounter with Friedrich von Hayek's "The Road to Serfdom" as a 20-year-old Oxford student, which marked her conversion to what was then the Tory far right. No politician, including Ronald Reagan, has ever gone further than Thatcher did in trying to implement Hayek's free-market ideology (and that of his principal disciple, Milton Friedman) on a grand scale. I can understand why Lloyd and Morgan concluded that fundamental questions of economic theory didn't belong in a movie for general audiences, but I'd like to believe that if Lady Thatcher is sufficiently compos mentis to watch it, she will snort in derision at its sentimental narrative mode: There she is as a girl, dewy-eyed and dish-scrubbing, as her pa extols the British spirit; there she is as elected leader of the United Kingdom, telling the miners' unions to stuff it: "The medicine is painful, but the patient requires it!"

One of the oddities of Morgan's screenplay lies in the fact that Thatcher is a living person who still owns the right to her own public utterances, so that everything we see in the movie is a paraphrase rather than a direct quote. But that's not nearly as strange as the fact that so much of "The Iron Lady" consists of the present-day Thatcher's extended conversations with her husband Denis (Jim Broadbent), who died in 2003. It's not unusual for elderly people to believe, or half-believe, that deceased spouses are still with them, of course, and such may be the case with Thatcher. But Broadbent's semi-belligerent, semi-affectionate Denis is too obviously a writer's gimmick, a key to unlock Thatcher's memories and a symbol of the way she conflates past and present.

"The Iron Lady" begins with a delicious scene of the aged Thatcher buying milk at a corner grocery, a completely unnoticed old lady surrounded by the new world she made (fast-talking, suit-wearing jerks attached to their cellphones) and the new world she could not resist (a London street awash in bhangra music and South Asian comestibles). Most of what follows is straightforward, brightly photographed TV drama in the BBC style, both mildly entertaining and somewhat interesting to those who remember that era. There's John Sessions as the early-'70s prime minister Edward Heath, whose compromises with the left persuaded Thatcher to skew ever more sharply in the other direction; and Nicholas Farrell as Thatcher's mentor Airey Neave, whose assassination by the IRA hardened her on the Irish question. Anthony Head plays the shuffling, stammering Geoffrey Howe, and Richard E. Grant plays the suave Michael Heseltine, two influential Tories who would eventually betray Thatcher, ending her political career. If you're really a Brit-politics wonk, you'll be glad to see Michael Pennington as the beloved Labour leader Michael Foot, who would lead the left-wing opposition to its 1983 Armageddon.

I suppose what you'll get from "The Iron Lady" is the sense that Thatcher was a female pioneer who relished a fight, made tough decisions she thought would return Britain to prosperity, and was hated by many people. (We repeatedly see a lazy synecdoche: Thatcher's limo pushing through a crowd, with some angry working-class yob with bad hair pounding on her window.) That's fine as far as it goes, but listen: Speaking as someone who despises almost every aspect of the Thatcherite social-economic consensus that has defined the capitalist world for 30 years, and almost every aspect of Thatcher's actual policies, she deserves more than this. Streep has captured Thatcher wonderfully as a plausible human being, but "The Iron Lady" explains nothing about her thoroughgoing rejection of Britain's postwar social-democratic consensus, or about the way she helped create a new class of the Anglo-American super-rich, or about her immense influence on the Cold War as a pragmatic intellectual influence on the Reagan administration. (She saw, much earlier than the Americans did, that Mikhail Gorbachev's ascendancy meant the end of old-line communism.)

Maggie Thatcher contains multitudes; she is rife with contradictions you can barely glimpse in this modestly affecting movie. American conservatives who profess to worship her probably don't know that she was pro-choice and pro-gay rights (although she was against the liberalization of divorce). She was one of the least popular prime ministers in British history yet was elected three times, partly thanks to the hopeless divisions within the Labour Party and partly because British elections are, at least arguably, less dominated by questions of personality. (As Lloyd and Morgan make clear, if she hadn't fought and won the Falklands war in 1982, Thatcher's premiership might easily have ended after three or four years.) As a starting point for Meryl Streep's 17th Oscar nomination -- and perhaps her third win -- "The Iron Lady" is exemplary. As a starter course in Thatcher studies and a post-"King's Speech," Brit-history melodrama, it's only barely acceptable.