Pick of the week: Dazzling Iranian drama "A Separation"

Pick of the week: Part Hitchcock mystery, part scathing social critique, \"A Separation\" is a must-see 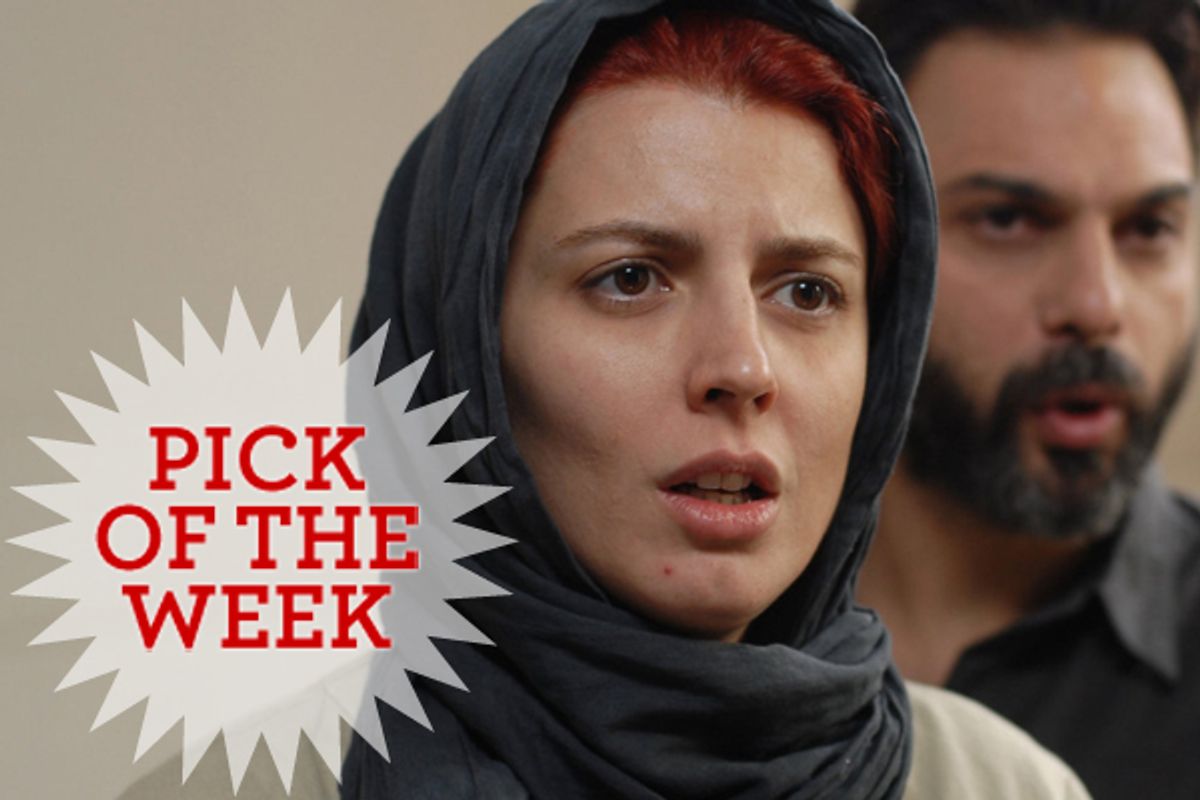 Leila Hatami and Peyman Maadi in "A Separation"
--

There are no explicit politics in Iranian director Asghar Farhadi's remarkable film "A Separation," and while Farhadi struggled with government authorities while making the movie, he has since received the Islamic Republic's seal of approval. "A Separation" opened the government-sponsored Fajr International Film Festival in Tehran earlier in 2011 and is now the official Iranian foreign-language Academy Award candidate. That suggests two conclusions that sound contradictory but may both be true: Maybe the Iranian cultural authorities aren't all that bright, and maybe the level of dissent and discourse inside Iran is more sophisticated than most outsiders imagine.

"A Separation" is many things, most notably a tightly structured and marvelously acted social melodrama about a failing marriage and a minor domestic incident that ignites a chain of explosive consequences. It's a deceptive, Hitchcockian mystery whose clues are laid out so carefully you'll probably miss them, and a complex philosophical fable in which every character is morally compromised. Farhadi's essential ingredients -- marital discord, religion, class divisions, male-dominated traditional culture -- could be found in any country in the world and any era of history. But it's well-nigh impossible to miss the fact that "A Separation" paints a scathing and highly specific portrait of the tension and hypocrisy and internal divisions of Iranian society, which leads me to speculate that Iranian authorities didn't miss it but were sufficiently wowed by Farhadi's work that they didn't want to repress it. (He went on to win the best-picture prize in Berlin.) At any rate, here it is: something close to a contemporary masterwork, and maybe the best foreign-language film of the year, right at the tail end.

A handful of world-cinema buffs already know the 40-year-old Farhadi, whose previous films include "About Elly," a festival favorite partly inspired by Antonioni's "L'Avventura," as a leading figure in that nation's younger generation of directors, following Abbas Kiarostami, Mohsen Makhmalbaf and Majid Majidi. (Lest you think Farhadi is some regime-friendly toady, he has spoken out within Iran on behalf of the exiled Makhmalbaf and the imprisoned Jafar Panahi.) Understandably, most American moviegoers have never heard of him and may be excused for approaching "A Separation" gingerly, perhaps fearing some kind of arduous art-house ordeal involving long, silent shots of arid scenery and farm animals. This is a complicated and serious film, make no mistake, but it's also a crisply plotted and urbane entertainment, full of humor and pathos, that depicts the fascinating social landscape of contemporary Iran behind the stereotypes.

In the opening scene, we meet our central couple, the grave, handsome Nader (Peyman Maadi) and his high-strung red-haired wife, Simin (Leila Hatami), as they argue their potential divorce before some unseen religious and/or political authority figure. (In Iran, the distinctions between church and state are never terribly clear.) But this mullah, or whatever he is, seems fundamentally bored by these middle-class people's problems. Simin wants to take their daughter of 11 or so, Termeh (Sarina Farhadi, the director's real-life daughter), elsewhere to live -- presumably Europe or America -- for unstated but obvious reasons, while Nader wants to stay in Iran and care for his elderly father (Ali-Asghar Shahbazi), who has Alzheimer's and cannot be left alone. It's a thoroughly modern dispute; nobody is quoting the Quran or arguing the subservient position of women or threatening a stoning. But the special circumstances, you might say, of the country around Nader and Simin contaminate the atmosphere from the first seconds. In fact, they still view each other with considerable affection and display a pretty normal married-people level of mutual contempt. In any Western nation, they'd either stick it out grumpily or split up amicably, and none of this would be happening.

When she's denied a divorce, Simin moves in with her parents and begins to wage a custody battle over Termeh. Still, the two can speak to each other without visible rancor, and at Simin's urging, Nader hires Razieh (Sareh Bayat), a devout working-class woman who lives in a distant suburb, to care for his father. Razieh doesn't really want the job and isn't up for it; she has to care for her young daughter at the same time and can't handle Nader's demented, incontinent dad, who has the unfortunate habit of leaving their apartment to wander the streets. Razieh lies to her hothead husband, Hodjat (Shahab Hosseini), about the job, knowing he would not approve for any number of social and religious reasons. (In one simultaneously heartbreaking and exasperating scene she phones some kind of Islamic help line, to find out whether it's a sin for her to clean Nader's father after he soils himself.)

In fact, Razieh is scheming to hand the job over to her near-bankrupt husband, without letting him know it's ever been her job. Arguably this second-rate deception sets the spring for the explosive social tragedy that follows, but Farhadi's screenplay is so tightly woven that nobody comes away clean. Simin and Nader are likable characters with whom an international bourgeois audience is likely to identify, but who also, in different ways, fall prey to their own egotism, prejudice and arrogance. Hodjat and Razieh seem much less sympathetic, at least at first -- they're aggrieved, intolerant and ultra-religious working-class people, the Persian equivalent of Tea Partyers -- but their desperation and deprivation are unmistakable, and the question of which of these couples has wronged the other worst is very much a matter of perspective. Even the minor misdeeds of Termeh, her schoolteacher and a neighbor end up playing a role.

When Nader comes home to find his father unconscious and tied to the bed, and Razieh apparently MIA, he flies into an understandable rage and fires her, in the process violating numerous Iranian taboos and provoking a tragic accident that may or may not be his responsibility. What follows is a kind of Islamic police procedural in which everyone involved has an incentive to lie or distort the facts, clues are everywhere, and unambiguous truth is nowhere to be found. Nader faces a possible prison term for what he did to Razieh -- and so does she, for what she did to his father. Meanwhile, the unstable Hodjat threatens violence against everyone else, innocent people are dragged in to falsify evidence, and Simin tries to do what rich people always do in these situations -- paper everything over with money.

Crisply photographed by cinematographer Mahmoud Kalari on Tehran locations, and made on a reported budget of $500,000 (none of it from official Iranian sources), "A Separation" is an old-fashioned drama of startling intensity and complexity, directed by someone with a firm command of both European and American cinema traditions. It's a more mature film about contemporary life than anything made in the United States in the last year or two -- but that's admittedly not setting the bar terribly high. Beyond that, it's a startling look inside a nation and a society that very few of us understand, beyond insulting media caricatures, and a profoundly humane work with the emotional payoff and far-sighted tragic vision of a great novel.

A Separation Iran Movies Our Picks Our Picks: Movies