World on the verge of a nervous breakdown

Capitalism's ceaseless quest to cut costs made us more jittery in 2011, and there's no relief in sight. 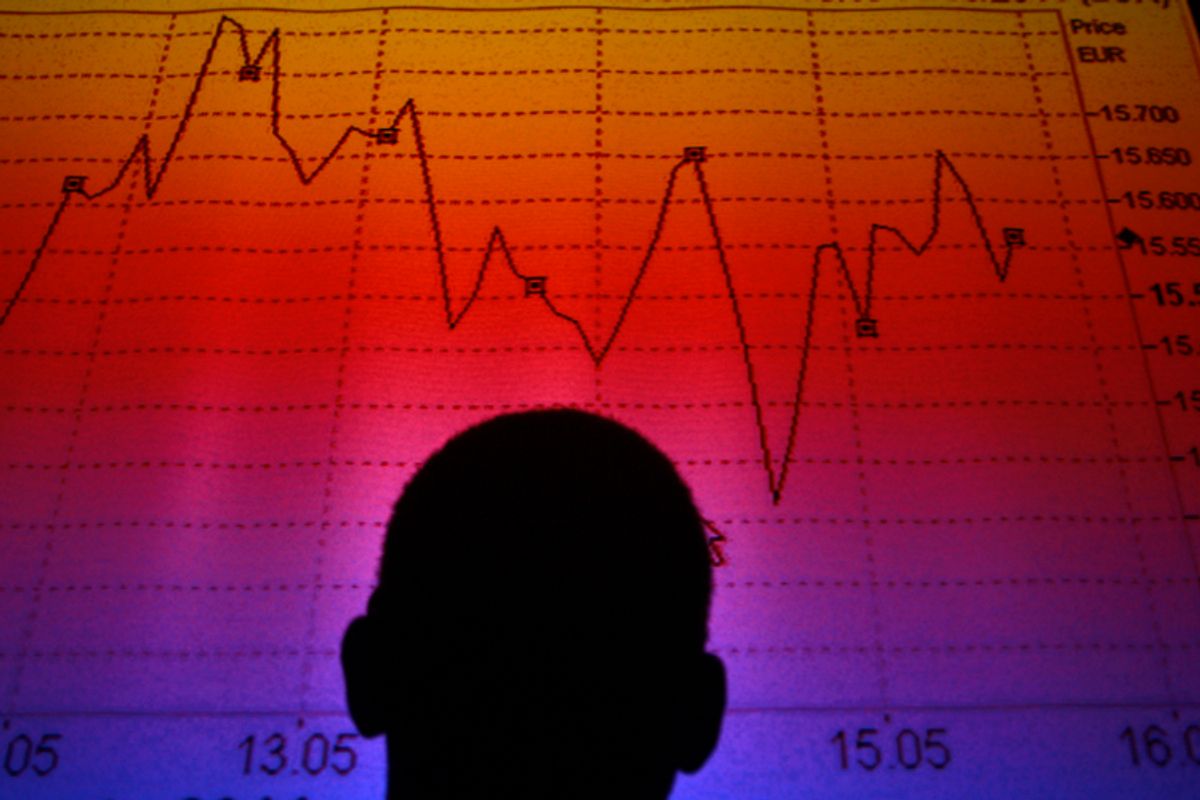 For those looking for signs of how globalization has woven the world into a web of unexpected vulnerability, 2011 offered a bumper crop.

An earthquake in Japan sent the global auto manufacturing industry into a conniption.

A flood in Thailand drastically reduced supplies of computer hard drives, forcing even a titan like Intel to swiftly reduce revenue forecasts.

It is child's play to find further examples. The underlying reality is that unexpected consequences make everyone nervous. Sensibilities are on hair trigger. Just two weeks ago, the New York Times captured the new jitteriness in a single quote. In a story reporting how U.S. stock traders were increasingly setting their alarm clocks for the middle of the night, in order to absorb the latest news from Europe as soon as it started to break, one stock analyst, Michael Mayo, complains in a tone of bemused wonder: “Who would have thought we would have to be looking at Italian sovereign debt yields to figure out what Morgan Stanley’s stock will do?”

For those who haven't been living and dying on every twist and turn of the European financial crisis, some unpacking of that sentence may be in order. Most modern governments routinely auction some form of state-backed bonds or other securities in order to raise cash. If the bond investors aren't excited about the opportunity -- let's suppose, just for argument's sake, that they're afraid the Italian economy is about to collapse -- then Italy must offer a higher interest rate, or yield, on those bonds to attract buyers. The higher the yield, the more negative the bond market's judgment is assumed to be.

But for most of November and December, the health of Italy's debt sales became not merely a judgment on Italy's economic health and fiscal stability, but a swiftly translated proxy for investor sentiment about the state of all Europe. If Italy ran into real trouble, so the theory went, France and Germany would soon be swept into the vortex. And a European recession would obviously be bad news for the rest of the world. So one unsuccessful auction in Rome becomes immediate cause for bearish sentiment in New York and Tokyo and Shanghai.

And no one wants to be caught more than one nanosecond out of the loop. If the orders go out to sell or buy, you want to get there first. Since now, more than ever, bad news travels fast, everyone's got to be quick on the trigger.

It doesn't seem healthy, but we're going to have to get used to it. Volatility and vulnerability are built into the infrastructure of our modern world. The jury may still out on the chaos theory question of whether a single butterfly flapping its wings in Botswana can cause a typhoon in the Philippines, but we now know without a shadow of a doubt that the relative success or failure of a troubled European government's attempt to raise cash can send instant shock waves across financial markets across the globe.

And we know, intimately, that it doesn't take much to set off a cascade of trouble -- after the great global crash of 2008, traders everywhere are in a state of permanent PTSD. Beyond the obvious surface connections between markets -- that European recession slowing U.S. economic growth -- there are abundant linkages beneath the scenes that are obscure and hard to unravel, interconnections woven by complex derivatives and hedging strategies and computer-driven high-speed trading algorithms that instantly translate woe in one market to panic in another.

The inescapable conclusion: Our modern high-tech markets, in which more money than ever before swirls around the globe in a blink of an eye, are better at transmitting panic and fear than anything heretofore created by humans. If civilization is supposed to imply progress, then something has gone very awry: In the second decade of the 21st century, our infrastructure is increasingly fragile, increasingly prone to disruption. The sword of Damocles hangs above everyone's head, and the thread that keeps it from falling is fraying perilously thin.

What is perhaps most fascinating about this state of affairs is how it has arisen as a consequence of global capital's relentless quest for lower operating costs and greater efficiency and flexibility. The better we get at extending supply and production chains across the globe, the more vulnerable those chains become to a disruption at any given point. The faster we enable the transmission of information around the world and through the financial markets, the more volatile those markets become, as every new headline sends a different trading signal.

The marvelous shipping ports of the West Coast, able to transport unthinkable quantities of goods from ship to train or truck via their state-of-the-art cranes, offer a perfect example. We've never been so good at moving stuff around. But shut down one of those ports for a week, and we're suddenly stuck. There's nowhere else for all that stuff to go!

We're going to see more of this in the future, rather than less. Climate disruptions will increase in frequency and severity, influencing commodity prices and immigration flows and insurance-industry profit margins. Higher prices for fossil fuels will complicate those transportation logistics -- a single shock in Saudi Arabia would blast through economies everywhere. The temptation to hit the panic button will become increasingly irresistible.

Our systems need more redundancy, and our temperament would benefit from a heaping dose of prudence. But it's hard to see where the encouragement to change our ways will come from. Because if there's one thing that's even more clear than the emergence of a constantly-on-the-verge-of-a-nervous-breakdown global economy, it's that, for the most part, our political systems are not up to the task of dealing with these challenges.

Which, of course, just increases our overall sense of antsy powerlessness. As individuals, we've never been so much at the mercy of events that play out thousands of miles away, and we are remarkably unable to do anything about it.

And here comes 2012, which will witness a U.S. presidential election, crunch time for the European fiscal union, a potentially slowing Chinese economy, more weather disruptions, and a whole bunch of stuff that we have no idea is coming. If 2011 was the year when globalization's downside became impossible to ignore, then 2012 will likely raise the ante by another order of magnitude.