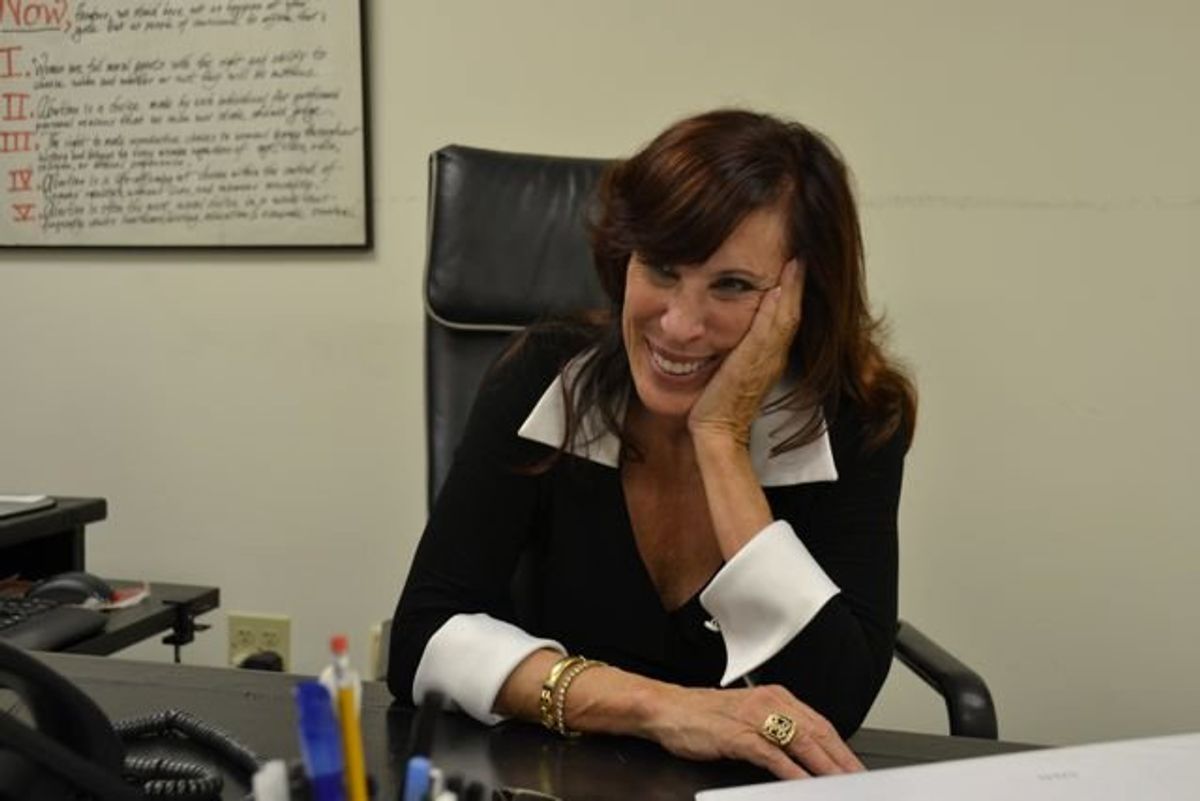 “You know, it’s so honest,” Sister Dorothy told Hoffman after reading it, “but sometimes Satan cloaks himself in truth.”

Sister Dorothy herself is in the book, blithely telling Hoffman, “I am sure you are a good mother. But you would be a better one if you stopped killing all those little Sashas in there.” And in that moment, Hoffman renewed her 40-year commitment to abortion care.

Hoffman has always been unusually willing to confront the anti-choice movement head-on throughout her career as a pro-choice activist, which began when she founded Choices four decades ago -- and two years before Roe v. Wade. She knows many of her colleagues would prefer to ignore or  not engage with protesters, but as she says, “Bullies don’t go away.”

She’s not a pacifist, either: When that bullying turned to domestic terrorism and murdering doctors, Hoffman bought a handgun. And she doesn’t think material possessions are unfeminist, either. Impeccably coiffed – signaling more Upper East Side doyenne than die-hard boomer activist -- she wears an enormous glittering ring she designed with the symbol of Choices, combining the caduceus and infinity symbols.

“If there’s a 1 percent at this point, feminists should be part of that 1 percent until we get to 50-50, or 60-40,” Hoffman says. “Why not? I trust myself with power.” She’s described in the book materials as a self-made millionaire and says that wielding power is a way for feminists to contend with the world as it exists now, not how they would like it to be.

A concert pianist turned psychologist and healthcare entrepreneur, Hoffman got into medicine by accident, by working at a doctor’s office in Queens. (As she details in the book, she had a longtime affair with her boss, whom she eventually married.) Even when she was operating an abortion clinic in the early days of legalization, she wasn’t particularly political – until the Hyde amendment, which denied all federal funding of abortion for low-income women. Around the same time, the Sister Dorothys of the world started showing up at her door.

In terms of the political climate since, Hoffman says, “I feel like I’m in the movie 'Groundhog Day.' I wake up and I think it’s the 1980s.”

She wasn’t surprised by the Obama administration’s capitulation on Plan B access in December. “There’s no line in the sand anymore; there’s no feeling of a political constituency that you can’t cross,” Hoffman says of an administration that felt it could overrule the FDA and cross major health and women’s groups. And she points the finger at, among others, pro-choicers themselves for allowing that situation to emerge.

Part of the problem is that the natural constituency of pro-choice values is still largely silent. “You know how many women have had abortions?” Hoffman says. “Abortion is as American as apple pie. I think it’s one in three. But we’ll go on TV and say, 'I just had my tits done or had a bikini wax,' but not had an abortion. If you could see that constituency rise up at one point in time -- but they don’t, because there’s this cloud.”

Interestingly, although the standard pro-choice line is essentially to let the woman define the embryo or fetus for herself, Hoffman has a more controversial stance: “In the beginning they were calling it a baby. We were saying it was only blood and tissue. Let’s agree this is a life form, a potential life; you’re terminating it. You don’t have to argue that abortion stops a beating heart. It does.” She adds, “I can’t say it’s just like an appendectomy. It isn’t. It’s a very powerful and loaded decision.”

But it’s a decision that she believes is irrevocably the woman’s, which in turn informs the rabid opposition to it: “The act of abortion positions women at their most powerful, and that’s why it is so strongly opposed by so many in society,” she writes in "Intimate Wars."

She also writes about her own abortion, which occurred after she’d been running the clinic for several years, in similar terms. “With my choice I was fighting for the right of all women to define abortion as an act of love: love for the family one already has, and just as important, love for oneself. I was fighting to reclaim abortion as a mother’s act. It was an act of solidarity as significant as any other I had committed.” Years later, after the death of her husband, she adopted a daughter from Russia.

Choices is celebrating its 40th anniversary not just with Hoffman’s memoir but also with a second clinic, opening in February in Jamaica, Queens, where the teen pregnancy rate is a third higher than the rest of the borough. “I would love to see a world where abortion doesn’t exist -- but that’s not this world,” Hoffman says.

That moment outside the clinic described in the book came on the heels of Hoffman experiencing a political and emotional exhaustion – after battles with landlords and regulators, entanglements in medical scandals, and more. But now, at age 65, she’s doubling down.

“My work has been a very deep kind of marriage, and like any relationship, there’s this approach, avoidance, the pull, I can’t stand it anymore, I can’t live with this kind of stress, I’m out of here,” Hoffman says. “I’ve had escape fantasies. But I always go home, and home is the work that I’m doing.”