The new darling of the Iowa GOP is perfect for the state's Christian right, but not for a national campaign 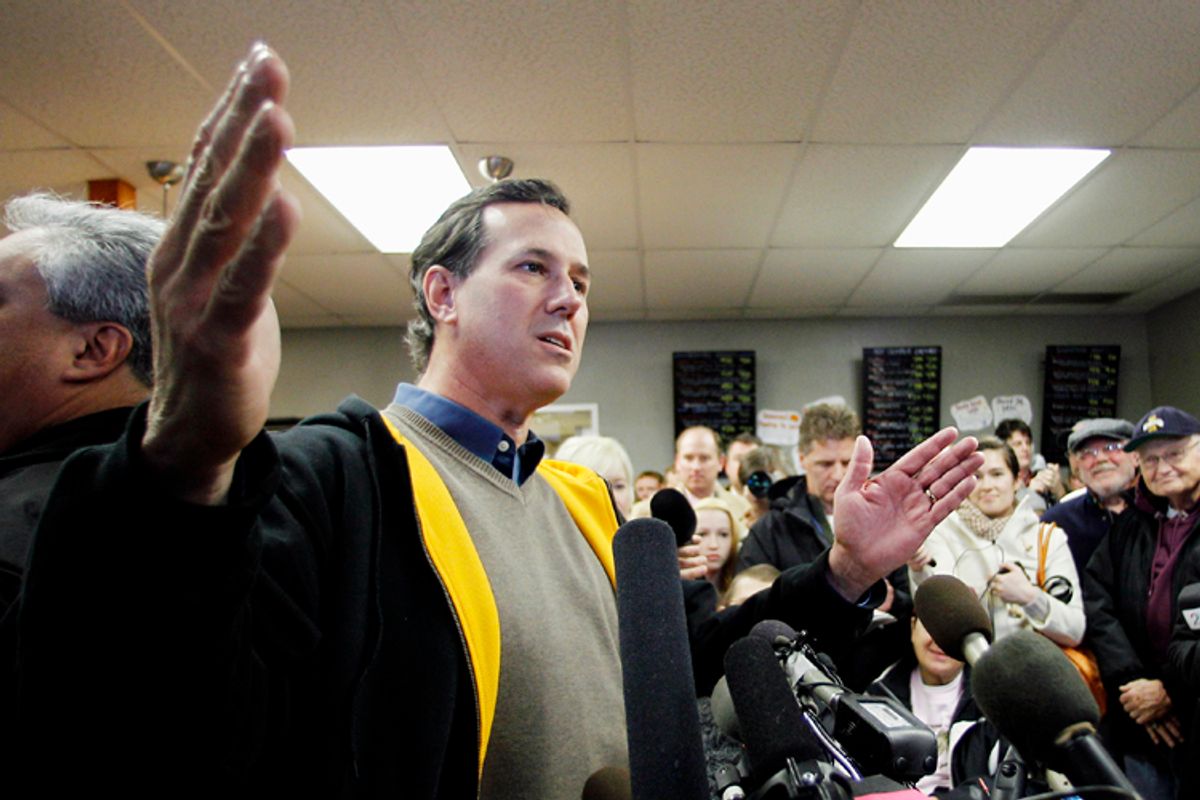 The only real shock in Rick Santorum's late Iowa surge is that it didn't happen sooner. He's the perfect candidate for Iowa Christian conservatives, even if it took them a long time to see it. First they flirted with gaffe-prone religious zealot Michele Bachmann, who confused John Wayne with John Wayne Gacy and insisted the HPV vaccine caused mental retardation. Then came a brief dalliance with the bumbling right-wing panderer Rick Perry, whose terrible campaign, given the high expectations and deep pockets of his wealthy supporters, has been 2012's biggest surprise. They drifted for a while to womanizing huckster Herman Cain, a candidate so unserious about his right-wing credentials that he claimed to be anti-abortion while insisting the decision had to be a woman's "choice." Just before Santorum, Iowa's Christian conservatives embraced the flip-flopping serial adulterer Newt Gingrich, until they remembered who he was.

It had to irk Santorum, watching Iowa Christian conservatives date most of his rivals before settling down with him. By contrast with most of the GOP field, Santorum is the real deal, a dull, home-schooling culture-warrior who likes to brag about fathering seven kids, as though morality can be measured in offspring. He staked his entire campaign on Iowa, setting up shop there, convinced that his unapologetic Christian political pitch is perfect for the state. He's this year's Mike Huckabee, the 2008 Iowa winner, albeit without the sense of humor or guitar. But whether Santorum finishes second, third or even first on Tuesday, he's already had his best week ever. This campaign can't go national.

Pennsylvania's former senator has been out of politics for six years, since he was trounced by Bob Casey in 2006. Since then he's lived off wingnut welfare, the gravy train funded by right wing corporate philanthropists to make sure defeated GOP politicians never go hungry. He's had a perch as a "senior fellow" at the right-wing Ethics and Public Policy Center, funded by Richard Mellon Scaife and the Koch brothers, among others. Until now, reporters have barely bothered to cover Santorum's events, since he's spent most of the year in the single digits in the polls. But now that he's in Iowa's top tier, he's getting more attention, and it's not going to help him become a national candidate.

Today in Iowa, the man who's lived on wingnut welfare promised to eradicate our already miserly government welfare programs, with a peculiar racial twist. After a spiel about the growth of Medicaid, he dropped a bizarre non-sequitur: "I don’t want to make black people’s lives better by giving them other people’s money," he told a crowd. "I want to give them the opportunity to go out and earn their money and provide for themselves and their families," he added. "The best way to do that is to get the manufacturing sector of the economy rolling."

Never mind that no one seemed to be talking about black people, or that the vast majority of recipients of all welfare programs are white. Santorum is doing what Republicans have done since the 60s: Trying to turn white people against government programs, and the government itself, by implying they only help black people. How's that working out for the shrinking white working and middle class? Not so well. Santorum also told an Iowa audience Sunday that "diversity creates conflict. We can't celebrate diversity it because it creates conflict." Not the best attitude for a man who wants to lead a rapidly diversifying America.

Then there's his routine homophobia. Before the campaign, Santorum was best known for comparing homosexuality to beastiality, shocking an AP reporter in 2003 with a rant about "man on dog" sex. On Saturday he told MSNBC's Chuck Todd that not only would he fight for a federal ban on gay marriage, he'd make sure it invalidated existing marriages between gay couples performed in states where it's currently legal. In December, he blamed high hetero divorce rates on gay marriage. Seriously. He's equally extreme on foreign policy, promising to bomb Iran's nuclear facilities to prevent them from getting nuclear weapons.

Steve Kornacki wrote a smart piece Monday laying out an unlikely but possible scenario for Santorum to emerge as the right wing's alternative to Mitt Romney nationally. It involves terrible Iowa showings for Gingrich, Bachmann and Perry, and maybe even one or more dropping out, a strong Santorum showing in South Carolina, where Romney is expected to struggle, and national conservatives coalescing around Santorum as the official "anyone but Romney" candidate. It's possible, but hard to seriously envision. Santorum has no money and no real operation in any state but Iowa. It's possible an Iowa victory would open donors' checkbooks, but it's tough to imagine a man who couldn't win his home state of Pennsylvania in 2006 being anointed the best conservative to beat Barack Obama in 2012.

Then there's Ron Paul, who's attracting support from Romney haters and ultra-conservatives in Iowa and beyond. The passion of Paul's supporters, his strong organization and his ability to raise money will make it hard for Santorum to gain and hold sufficient right-wing support to seem like a viable Romney alternative.

So Santorum should enjoy his moment in the sun while it lasts. Even an Iowa victory is unlikely to make him the official anti-Romney. When Gingrich surged, I compared the GOP primary to a childrens' T-ball game, in which everyone gets a turn being a front-runner.  Now it may be Santorum's turn, but he still seems destined to return to wingnut welfare.