For the Republican contenders, urban areas are out of sight and out of mind 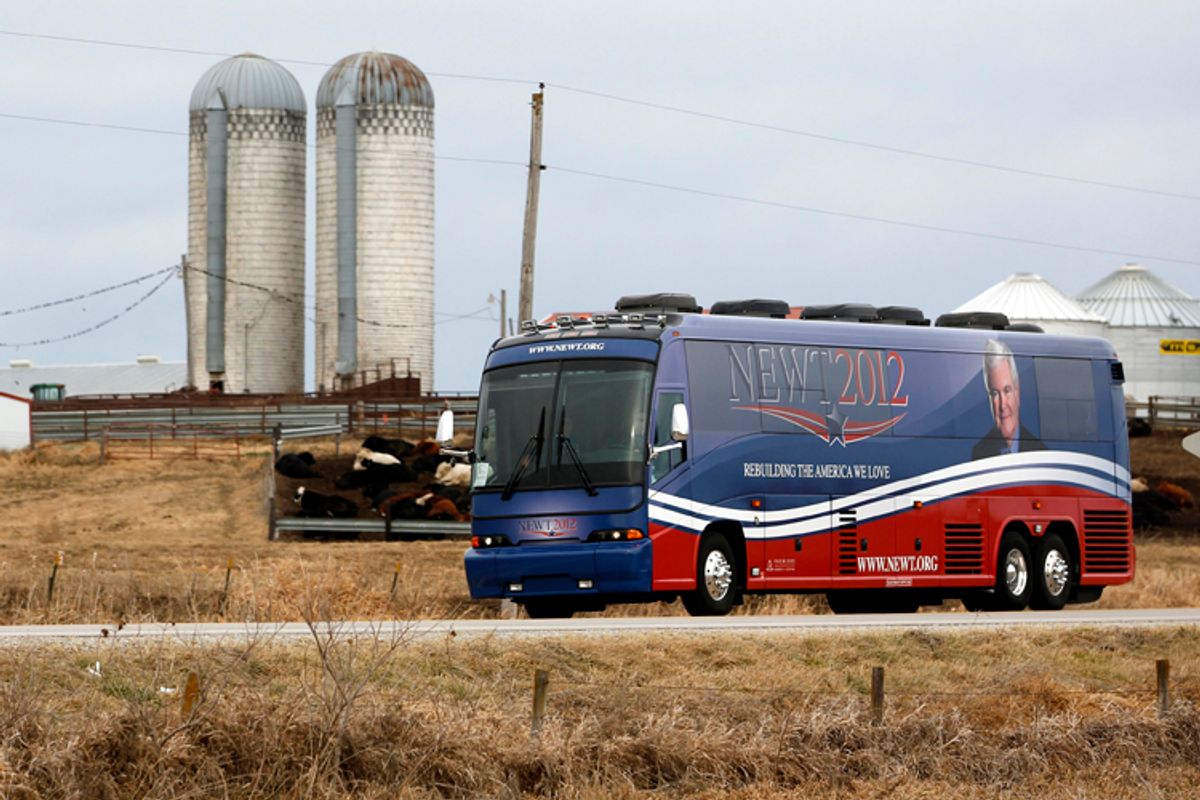 The Republican presidential primary has covered significant ground. Against a backdrop of Iowan cornfields, candidates have debated socialism, capitalism, immigration and American exceptionalism, and have even touched on the finer points of Shariah law and the Federalist Papers. One thing you don't hear about is America's cities and the ongoing, and growing, urban crisis.

There are some oblique references, like Newt Gingrich's suggestion that child labor laws be modified so that poor children can work as school janitors. “Really poor children in really poor neighborhoods,” mused Gingrich, “have no habits of working and have nobody around them who works ... They have no habit of ‘I do this and you give me cash,’ unless it’s illegal.”

Gingrich's comment is an example of surviving remnant of dog-whistle politics that demonize urban residents; recent examples include new state laws to drug-test those on public assistance and the ongoing effort to cut food stamps (and Gingrich did call Obama the “food stamp president”). The specter of the black ghetto still scripts urban dwellers as villains (often as thieves robbing the citizen either directly, or as in this Rick Santorum comment, indirectly: “I don’t want to make black people’s lives better by giving them other people’s money”). But unlike the era of Ronald Reagan's welfare queen, today cities are more ignored than attacked. And this goes well beyond Iowa.

“The core of the Republican constituency in metropolitan America are the growing, racially and economically exclusive 'outer suburbs' whose privileged status Republicans seek to protect at all costs,” says former mayor of Albuquerque David Rusk, now a consultant. He cited New Jersey Gov. Chris Christie as an exemplar of the trend.

Gingrich owns a Northern Virginia cul-de-sac mansionette that "tends toward the ornate" and includes a master bath entirely covered in mirrors, according to a recent New York Times article on candidate homes. Rick Perry moved into a high-end gated community in exurban Austin, Texas, while the governor's mansion was under construction. Michele Bachmann lives in a McMansion with a builder’s description that "reads like a synonym finder for nouveau suburban glory, touting the home’s arched stone entry, hand-scraped walnut plank flooring, and a fully paneled library with see-through fireplace.”

Romney rose to the pinnacle of Massachusetts politics from the leafy and high-end Boston suburb of Belmont, where he had a bathroom with “vaulted ceilings and a soaking tub some might mistake for a lap pool,” a residence “heavy on cream-colored upholstery crowded with pillows. The curtains are pleated so precisely you might think they were styled by Mr. Romney’s barber.” The house, until recently one of four owned by Romney, has now been sold.

While Romney's father, George Romney, served as secretary of Housing and Urban Development in President Nixon's administration, the candidate has said nothing in particular about cities. As with so many other things, Romney once had a different opinion. According to the New Republic, he was a devotee of smart growth during his years in the governor's mansion -- transit-oriented development and anti-sprawl measures included. “We don’t want to become like Houston,” said Romney. “Not that there’s anything wrong with Texas.”

The neglect of the cities can be traced back a half-century to the apogee of mid-20th-century American liberalism. In the 1950s and 1960s, the captains of municipal state, flush with federal funds and armed with great confidence in modern planning and architecture, bulldozed miles of “blighted” neighborhoods (often non-white) and rammed highways through the centers of many American cities. The feverish remaking of the cities was a desperate attempt to compete against the suburbs and woo back the middle class, which had departed thanks to the federal dollars propping up millions of (whites only) mortgages and miles of highways. Tragically, it was the liberal federal government's funding of suburban homes and highways, and bulldozer-heavy urban renewal programs, that paved the way for Nixon and Reagan's abandonment. Black people and the left were suspicious, the rising conservative tide was contemptuous, and politicians changed the subject. So, then, went the neighborhood.

It was from these very suburbs that modern conservatism arose, then proceeded to wage war on the city. In 1964, Orange County suburbanites reaping the benefits of government-financed defense jobs mobilized against fair housing legislation, and for their Sun Belt champion, Barry Goldwater. Nixon's more successful 1968 silent majority was a suburban one, legitimating the postwar success “earned” by white elites. He promised protection against school busing, and promised that they were not, like George Wallace's rural poor disciples, bigots. Just because suburban conservatives had backed off from de jure segregation doesn't mean they wouldn't attack urban blacks: take, again, Ronald Reagan's “welfare queen.” Save for Buffalo congressman, H.W. Bush HUD secretary, and 1996 vice-presidential nominee Jack Kemp, cities would get little Republican attention. In the two decades since the Los Angeles riots, urban issues are more often ignored. Concerns and paranoias now seem more abstract or diffuse: Shariah law, or the Mexican day laborer in the parking lot of your local Home Depot.

On the policy level, Reagan's 1980s cutbacks were followed by modest and private-sector-focused initiatives under Presidents George H.W. Bush and Bill Clinton. The programs, dubbed “enterprise zones” under Bush and “empowerment zones” under Clinton, were a clear repudiation of the direct government intervention that characterized Roosevelt's New Deal and Johnson's Great Society. Whether prompted by resignation or opportunism, urban policy now caters to business-minded solutions: tax abatements and special service districts to encourage downtown development, and a fervent belief that young “creative class” professionals (think Portland, Ore., as national role model) and tourism (think Baltimore's Inner Harbor) could serve as the foundation for a new urban economy.

“Republicans saw little gain by reaching out to minority voters (the quixotic efforts of GOP maverick Jack Kemp excepted) and Democrats feared that if they put too much effort into solving urban problems,” says University of Pennsylvania historian Thomas Sugrue, “they would reinforce their image as the party of 'special interests.'”

President Obama has encouraged smart growth and regional cooperation between cities and suburbs, but the efforts have been fiscally and politically modest, and far from high-profile. One promising initiative has HUD, the Department of Transportation and the Environmental Protection Agency participating in a tri-agency Partnership for Sustainable Communities, which Rusk calls “an important initiative in re-orienting federal 'urban policy'” toward metro-wide solutions. But he criticizes the Obama administration for being “much too cautious in setting their requirements" and called the $100-50 million in annual funding "a pittance compared with the $145 billion that the three federal agencies give out in annual grants-in-aid to state and local governments."

One reason that cities don't figure in today's campaigns is simply because fewer people live in them: America is now a primarily suburban nation. But America's suburban majority, which has also diminished urban clout in Congress and statehouses, distracts from something bigger and more important. As older suburbs decline and lose population to further sprawl, the line between urban and suburban issues blurs. The American electoral system obscures the shared conditions facing cities and older post-World War II suburbs.

“If the U.S. had a popular vote election, candidates would focus on saturating the major metropolitan media markets, a race to collect 51 percent of the votes by adding up the biggest population centers,” says George Washington University historian Christopher Klemek, author of "The Transatlantic Collapse of Urban Renewal." “We wouldn't be talking about swing states; in fact, we wouldn't be talking about states at all. Cities -- or at least the broad, decentralized (sometimes tri-state) metropolitan urbanized regions that most Americans now inhabit -- would be at the center of the campaigns.”

Yet the political debate is dominated by the exurbs, the pell-mell ribbons of home and office development that snake along the nation's highways. While the original postwar suburbs were built for well-to-do commuters to the city, today's exurbanites commute from gated home to office park.

The folksy country patter of politicians is of course about the aberrational power that we have bestowed on the microstates of Iowa and New Hampshire. But the affectations continue well through the general election. It is not so much about the countryside at all, but rather an appeal to the constantly fleeing, new-home-buying, SUV-driving denizen of the exurb, the newest home of a deeply held, though deeply hypocritical, American pastoralism. While the suburban dream was anti-urban, the exurban mind-set is simply non-urban. At least, that is, in mind-set. The frontier spirit masks a deep interdependence.

Rick Perry, for all of his thickly lacquered rural charm, in reality rules over one of the nation's largest metropolitan conglomerates. “Growth in Texas,” Ryan Avent notes in "The Atlantic Cities," “has really been about growth in its biggest cities,” Austin, Houston, Dallas and San Antonio. Texas is the most urbanized state per capita.

Those cities have labor forces that are powered by immigrants. But on the campaign trail, the perception that cities are harboring Mexicans is a great liability. Gingrich has declared that he will block federal funding to any “sanctuary city.” Romney has gone after bleeding-heart municipalities since 2007 when he ran ads criticizing Rudy Giuliani's tenure in New York. In response, Giuliani noted that Cambridge, Mass., Somerville, Mass., and Orleans, Mass., had declared themselves sanctuaries. Cities, by virtue of progressive leadership or brown skin, still have the power to attract conservative opprobrium. Think about what Republicans mean to convey when they say “San Francisco.”

American cities also receive attention when a candidate visits New York to raise money or eat bad pizza with Donald Trump. Yet much of Manhattan — like San Francisco — is thoroughly gentrified, and the deepening and unresolved problems of urban poverty and violence are kept well out of sight. The same goes for Washington, D.C., where a rapid influx of young and party-going policymakers has demographically transformed neighborhoods where shootings once dubbed my home city “Murder Capital of the World” and prompted our NBA team, the Washington Bullets, to change its name to the deflating “Wizards.” The emergence of the city as playground for the young and well-to-do masks the fact that for poor and working class city-dwellers, nothing much has changed. This is just as true now that many live in the suburbs. But you won't hear it from any Republican presidential candidate.