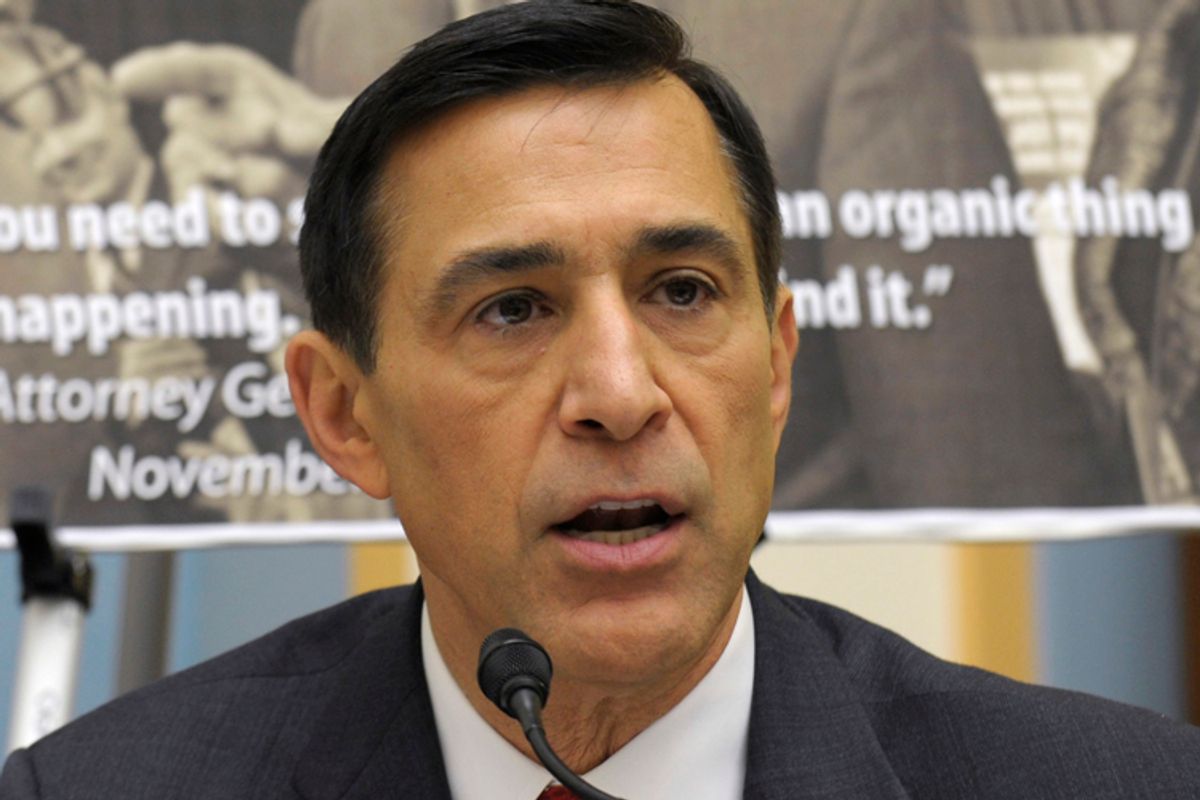 As the debate over the Stop Online Piracy Act (SOPA) rages on in Washington, California Rep. Darrell Issa – perhaps best known in these parts for being a frequent, and spirited, critic of the Obama administration – is agitating for an alternative measure that can win the support of SOPA's many critics in the online world. In doing so, Issa is engaging in a congressional demonstration of the fact that Marshall McLuhan was right: here, the medium truly is the message.

Issa's bill is called the OPEN Act, or the Online Protection and Enforcement of Digital Trade Act (the acronym comes from fudging a bit – picking up the first two letters of “enforcement” and ignoring everything that follows). Where SOPA aims to empower the Justice Department to go after websites that allegedly infringe on copyright, and doing it on the Internet’s domain name layer, OPEN goes another route: strictly limiting the bill to foreign sites, setting up the International Trade Commission as the enforcer, and focusing on a “follow the money” approach, as in using digital payment systems as the choke points on targeted sites, a mechanism that has worked to thwart the WikiLeaks movement. On cue, the Motion Picture Association of America, a major SOPA backer, dismissed OPEN as “go[ing] easy on Internet piracy.”

With OPEN, though, Issa isn’t simply focusing on changing what’s in the bill. He’s interested in changing the process by which legislation gets made. When SOPA first started making news in October, it seemed like the legislation dropped from the sky. (More likely, it was dropped from the computer of an entertainment industry lobbyist.)

On OPEN, Issa’s strategy is to show his work. He picked up KeepTheWebOpen.com, a digital gathering point for the bill. In mid-November, after the House’s one and only hearing on SOPA, Issa and his team whipped together what they call “Madison” – a digital legislative platform that lets anyone suggest changes to the draft bill, a Wikipedia of sorts for legislative text. Here, leaving fingerprints is encouraged. All edits and comments are signed, first name, last initial.

And during the Judiciary Committee's markup of the bill in late December, Keep the Web Open streamed the hearing feed and paired it with a Twitter stream of commentary from folks watching along at home. Issa’s office later reported that, on the first day of markup, there were some 138,000 instances of people watching the proceedings coming from the U.S. alone. “I want to keep the Web open,” says Issa in a video posted on the site, “because the prosperity brought by innovation has spread to the four corners of our planet.” He went on: “We need to be more open, not closed."

As an open digital platform where anybody can participate, Issa’s site is a particularly appropriate place for opposition to SOPA. That’s because, in many ways, the battle over this bill is about exactly that: open digital platforms where anybody can participate. Think Twitter, Facebook, YouTube and the like. SOPA, say its critics, advances an unreasonable expectation of complicity by those sites for what people post upon them. And that, they say, is bad for the Internet.

That’s why the most passionate, and creative, protests against SOPA have come from the likes of, for example, the document-sharing hub Scribd, which disappeared files last month in dramatic push-back. Or the micro-blogging service Tumblr, whose millions of users recently found its dashboard mock-censored. Or Reddit, whose general manager caused a stir by commenting, on the site, that SOPA “would almost certainly mean the end” of that immensely popular social news platform.

But far more surprising is this: that OPEN, both bill and concept, finds itself meeting a Congress primed to accept it. Members of all stripes and seniorities are recoiling not just at what’s in SOPA, but by a process that has played out incredibly quickly, often in secret, and with little meaningful outside input. The last two months have been, for many, a demonstration of what’s wrong with bills from nowhere.

It’s all making for even stranger bedfellows than usual. Leading the opposition to SOPA in the House Judiciary Committee alongside Issa, who once ran an electronics company, has been Zoe Lofgren, a California Democrat. “We spent years” working on the hugely important Digital Millennium Copyright Act of the ‘90s, said Lofgren during the markup, and yet, “this is being jammed through in two months' time.” Lofgren represents Silicon Valley, so she’s a given.

But other members are objecting to SOPA as well. Congress has held a single hearing on SOPA, in November, and there, only one witness, Google’s policy counsel, Katherine Oyama, raised doubts about the bill. “None of the six witnesses were able to address” the security implications of the bill, complained 17-term Wisconsin Republican Jim Sensenbrenner. “This bill is not ready for prime time," he said. Jim Jordan of Ohio, an über-conservative, recommended Congress “take a little extra time" on the legislation.

Two second-term members, Colorado liberal Democrat Jared Polis and Utah conservative Republican Jason Chaffetz, tag-teamed during the markup, with Chaffetz contributing two of the days more memorable lines. “Basically, we are going to do surgery on the Internet,” he said, “and we haven't had a doctor in the room to tell us how we're going to change these organs. We are basically going to reconfigure the Internet and how it is going to work without bringing in the nerds.”

Issa is aiming to bring in the nerds, and everyone else.

Keep the Web Open is very much a work in progress. As a legislative collaboration tool, Madison is rudimentary. One possible path for development is to do something like the U.S. Patent Office does with its Peer-to-Patent project, which seeks to tap the wisdom of experts to narrow the universe of information overwhelmed patent reviewers need to contemplate. The goal wouldn’t be for say, me, to parse the nuances of the digital security implications of domain-name filtering. It’s to get people who know the field inside and out to do it, to point Congress toward what it should be considering.

And with its video feed, Keep the Web Open could explore something like the groundbreaking project of former Wonkette blogger Ana Marie Cox, liveblogging the 2009 California Supreme Court hearing on Proposition 8. Bored lawyers joined in to explain to laypeople what they were watching. Why did Judge X ask that question that way? To which case was attorney Y referring? Network engineers could do the same thing during a hearing on the OPEN Act.

Last month’s SOPA markup served as a reminder that openness is coming to Congress, even if glacially. The proceedings came to a screeching halt after Texas Democrat Sheila Jackson Lee discovered a Twitter post from fellow committee member and Iowa Republican Steven King that read, “We are debating the Stop Online Piracy Act and Sheila Jackson has so bored me that I'm killing time by surfing the Internet.” Lee, who called King's tweeting “so offensive,” was eventually persuaded to strike her words from the record. No matter. The words were already everywhere on Twitter and elsewhere online.

No matter their persuasion, members of Congress don’t like to feel bullied. They hate to feel out of control. It’s one reason many of them have so resisted efforts to open up Congress. But some, at least, are coming to the realization that open-source legislation might be the alternative to having legislation foisted upon them by lobbyists. And that’s creating unusual allies. That Peer-to-Patent initiative that has so much in common with Issa’s Keep the Web Open was, for example, a project of Beth Noveck, the Obama White House’s point person on open government until recently. But the future has a way of doing that.