His cockiness has vanished with his poll numbers. Now he's determined to take Mitt Romney down with him 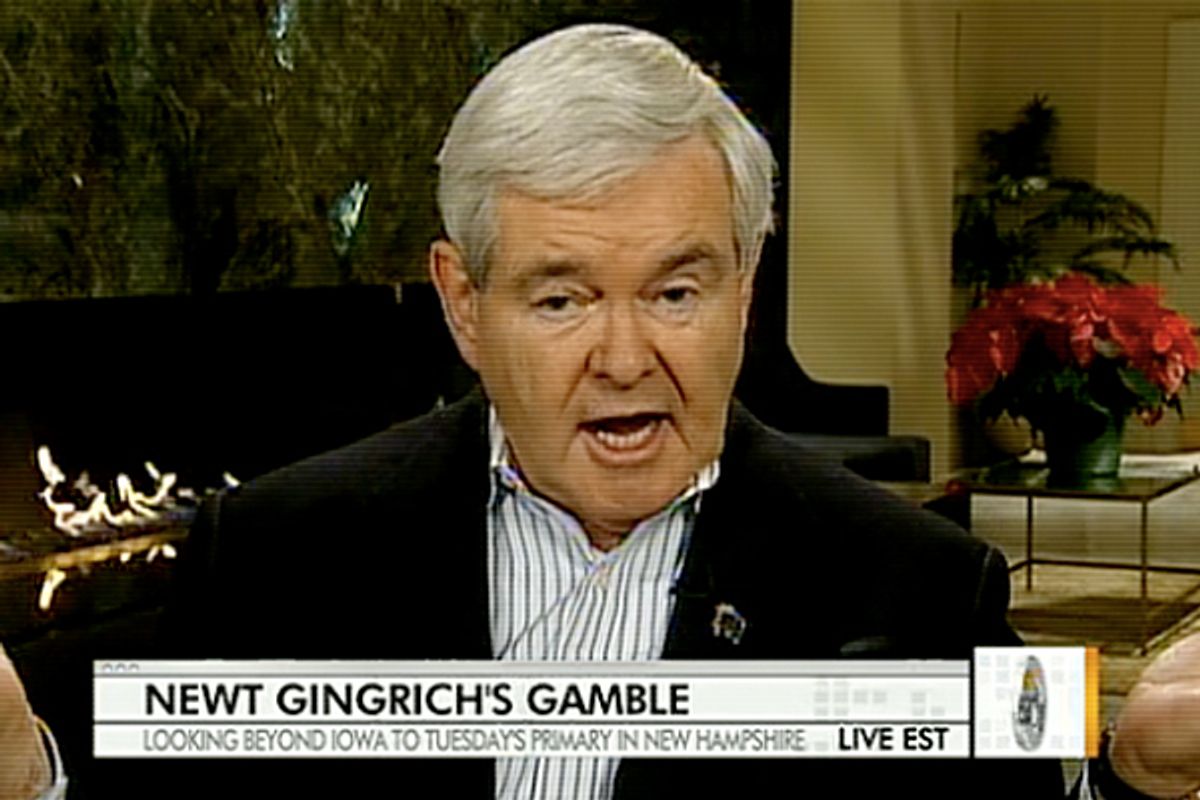 On Dec. 1, Newt Gingrich proclaimed that "it’s very hard not to look at the recent polls and think that the odds are very high I’m going to be the nominee." But by the  eve of the leadoff caucuses that will be held tonight, he was reduced to admitting that "I don't think I'm going to win" Iowa and suggesting that any outcome in which he retains a body temperature of 98.6 degrees should be considered a victory.

Three things happened in the month between then and now to sap his cockiness. The first involved key opinion-shaping voices within the Republican Party -- many of whom recall with horror Newt's four-year run as House speaker in the 1990s -- using their platforms to disparage Gingrich and tamp down rank-and-file enthusiasm for him. The second was that the pre-primary debate season abruptly came to an end on Dec. 15, nearly three full weeks before Iowa, depriving Gingrich of the not-so-secret weapon that had allowed him to compete with his better-funded rivals and surge in the polls. And the third involved the torrent of anti-Newt ads that a well-funded, Romney-aligned SuperPAC has rained down on Iowans for the past several weeks.

Add all of this together and factor in Gingrich's inability to match the pro-Romney forces' ad expenditures and you have the recipe for the polling meltdown that Gingrich has suffered since early December. Oh, and also for a Newt eruption -- which played out on CBS this morning when Gingrich tore into Romney, calling him the kind of candidate who "will lie to you to get to be president, will lie to you when they are president." Asked if he was calling his opponent a liar, Gingrich replied, "Yes."

The moment, as Taegan Goddard noted, immediately called to mind Bob Dole's infamous "Stop lying about my record!" remark when he appeared on NBC with George H.W. Bush the night of the 1988 New Hampshire primary. Bush, aided by a last-minute barrage of ads that portrayed Dole as a tax-happy flip-flopper, had just defeated Dole by 9 points, a result that essentially ended the campaign and reestablished Bush as the inevitable GOP nominee, and Dole had been asked by Tom Brokaw if he had any message for his opponent. The snippy comment would haunt Dole for years, cementing his "hatchet man" image.

Barring a miracle in Iowa tonight, Gingrich's campaign is now about as doomed as Dole's was after New Hampshire in '88. But that doesn't mean he's irrelevant to the GOP race. In media appearances over the past few days, he's made it clear that he no longer feels compelled to run a strictly positive campaign (a vow he proudly made when his poll numbers were soaring) and that he plans to go after Romney hard in the next two GOP contests, in New Hampshire and South Carolina. As he told ABC News:

“You can do very calm, very pleasant ads that the nature of the Republican Party is such that a calm and pleasant ad that says ‘He was for tax-paid abortions, I’m against it,’” Gingrich said. “You can say it happily, pleasantly, it works just by the nature of the data.”

He'll never say it, but clearly Gingrich sees an opportunity for revenge here. And maybe he'll be able to pull it off. After all, Gingrich has the backing of the influential New Hampshire Union Leader, which already doesn't like Romney and will surely echo whatever harsh words Gingrich has for him over the next week. And resistance to Romney seems particularly pronounced in South Carolina, where Romney only won 15 percent in 2008 and where around 60 percent of the GOP electorate will be composed of evangelical Christians. At this point, Gingrich would surely be happy just to deny Romney the nomination, even if it goes to some other candidate besides Gingrich.

But a scorched earth campaign against Romney could also backfire, since Romney benefits from a divided conservative base. Look at it this way: If Rick Santorum ends up winning or coming close in Iowa tonight, Gingrich will actually make it tougher for him to lock down the conservative anti-Romney vote in the next states by sticking around, making lots of noise, and gobbling up conservative votes of his own. If the lack of a consensus conservative alternative is Romney's best friend, then Gingrich might actually be doing him a favor by pressing on out of spite.