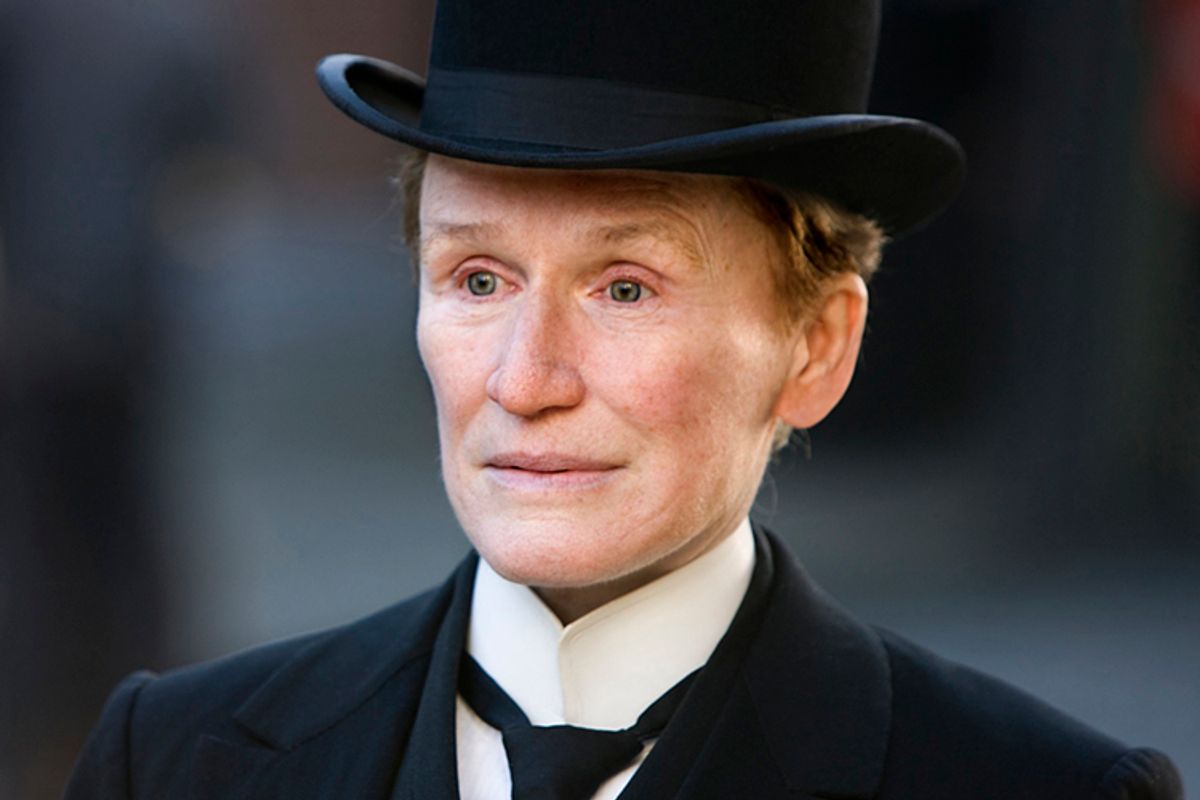 One of the real downsides of the holiday season's movie onslaught -- and there weren't too many upsides, considering the dismal state of the business -- lay in the fact that all sorts of interesting smaller films with limited audience appeal got swamped beneath the supposedly prestigious Oscar pretenders. But if you've had a Yuletide surfeit of "Girl With the Extremely Loud Maggie Thatcher Riding a War Horse Tattoo," or weren't that interested in the first place, there are plenty of other options slowly percolating out across the country.

I've already recommended "A Separation," the marvelous Iranian drama that Sony Classics has in limited release, which is a clear favorite for the foreign-language Oscar. There's also Angelina Jolie's heartfelt and surprisingly convincing "In the Land of Blood and Honey," a romantic tragedy set against the dreadful Balkan wars of the 1990s. Alexander Payne's family melodrama "The Descendants," starring George Clooney as a beleaguered Hawaiian dad, opened modestly way back in November but continues to gain strength as an Oscar contender -- alongside this year's implausible front-runner, the black-and-white French silent comedy "The Artist." Meanwhile, even if Tomas Alfredson's new version of John le Carré's "Tinker Tailor Soldier Spy," also in limited release so far, seems to have little or no Oscar juice, it's a beautifully executed, stylish and cold-hearted genre movie, arguably superior to Fincher's "Girl With the Dragon Tattoo."

Here are three more intriguing films I didn't get a chance to cover before year's end, all of which arguably would have gotten much more attention in some different month. In the cruel logic of the movie business, all are defined as "specialty-audience" oddities, meaning that they're destined to play only a handful of big-city and college-town theaters -- unless the gamble to release them amid an overcrowded awards season somehow pays off. Indeed, it's entirely possible that Glenn Close's massively peculiar performance as the gender-bending title character of Rodrigo García's "Albert Nobbs" could merit a best-actress nomination, although Close's chances of winning in a year that includes Meryl Streep playing Thatcher and Michelle Williams playing Marilyn Monroe are near zero.

Albert Nobbs is a formal, almost expressionless little fellow who works as a waiter in a somewhat decayed society hotel in Dublin, circa 1900. You can't exactly say that Close makes a convincing man, but then, I'm not sure Albert is supposed to be a convincing man. He's more like a convincing nonentity, a genderless background figure who serves the Anglo-Irish gentry in exemplary fashion and attracts almost no notice. No one at Morrison's Hotel suspects Albert's secret, and s/he has been living successfully as a man for 30 years. But as a working-class Englishman in an Ireland that's principally divided between Protestant masters and Catholic servants, he's also an outsider on numerous other levels.

I'm half tempted to suggest that Close and García are missing the point of George Moore's original 1927 novella, which may be more an allegory about class, nationality and religion than a gender-studies text, but that's not quite fair. Close has been nurturing this project for many years, having appeared in a theatrical adaptation as early as the 1980s, and understands the story as well as anyone. (She originally developed this movie with Hungarian director István Szabó, who retains a story credit for the screenplay written by Close, Gabriella Prekop and Irish novelist John Banville.) "Albert Nobbs" is an alternately frustrating and fascinating film, which sometimes feels like a clunky BBC costume drama but also has some wonderful characterizations, most notably Janet McTeer, who steals the show as another transsexual character, one who has pulled off the switch with the brio and masculine swagger Albert so conspicuously lacks.

Close's performance is impeccable, at least in the sense that I'm confident every moment has been weighed carefully and every line carries a clear intention. But Albert is such a strange, almost inhuman, self-willed creation that it's hard to feel anything for him or her, beyond a kind of distracted pity. His dream of finding a wife and settling down in bourgeois domesticity -- as McTeer's character has apparently done -- seems agonizingly naïve in the context of a class-divided, God-haunted society where the word "lesbian" was unknown, and the concept it denotes would have horrified almost everyone, Albert Nobbs included. Mia Wasikowska plays the youthful object of Albert's affection, who only has eyes for Aaron Johnson's hunky laborer. García, previously the director of "Mother and Child," "Passengers" and numerous TV episodes (and the son of Nobel laureate Gabriel García Márquez), never feels entirely comfortable with the period or location, but for all its limitations "Albert Nobbs" has a puzzling undertow, and gets more involving the longer you stick with it.

I don't think the word "lesbian" is ever spoken out loud in writer-director Dee Rees' widely praised debut film "Pariah," which is about as far from "Albert Nobbs" in tone and setting as you can get, but tells a strikingly similar story. Set entirely within the African-American community of Brooklyn, N.Y., "Pariah" testifies to the energy and diversity now found in black-oriented indie cinema, in the wake of films like "Precious" and "Night Catches Us." Rees' characters are urban strivers on the lower edge of the middle class; Alike, better known as Lee (played by luminous teenage actress Adepero Oduye), has grown up in a brownstone apartment with two parents, rigorous rules and her goody-two-shoes younger sister, Sharonda (Sahra Melleese).

Both Lee's police detective dad (Charles Parnell) and her upstanding, medical-technician mom (the terrific Kim Wayans) realize that there's something different about Lee, and that her "tomboy act," as Mom puts it, is starting to look like more than a phase. What they don't know is that Lee and her best friend, the conspicuously butch Laura (Pernell Walker) put on hip-hop-style boys' clothing at night and hit a raunchy women's nightclub where they can shower strippers with dollar bills and dance up close with "femme" lesbians or bi-curious straight girls. If the narrative of "Pariah" is predictable and its delivery system rather after-school special, the characters and setting are unforgettable and Lee's coming-of-age story feels both true and moving. Wayans is probably the best in the cast, rendering an unsympathetic character in multiple, complicated shades, but it's great to see so many terrific black actors playing fully realized characters. Parnell and Walker are also strong, and Aasha Davis plays a new friend who seems, all too briefly, to offer Lee a way out of her neighborhood and its constrictions.

Last but definitely not least on this list is Wim Wenders' 3-D documentary "Pina," which affected me in a way no other movie of 2011 quite managed. In that sentence I've already told you almost everything you need to know: Wenders, the 1980s German art-house legend, has made a non-narrative, dream-like documentary about the late choreographer Pina Bausch, who revolutionized the field of modern dance with her theatrical, surrealist-influenced works. Yes, it's in 3-D, and it represents perhaps the most absorbing and imaginative use of that technology in the current wave. (I'll make allowances for "Avatar" and "Hugo," the only mainstream 3-D movies that were absolutely worth the extra money.)

By this point you're either reserving your tickets or clicking over to news from Iowa, so there's no point belaboring "Pina" at length. Wenders had long planned to make a film with Bausch, and after her cancer diagnosis and sudden death in 2009, her dancers convinced him not to abandon the project. In combining archival footage, interviews with dancers from Bausch's Tanztheater Wuppertal (in their numerous native languages, ranging from English to French to Croatian to Korean) and ingeniously restaged performances of such Bausch works as "The Rite of Spring," "Kontakthof" and "Café Müller," Wenders has woven a gorgeous, hypnotic tapestry of sound and vision. You don't have to know the first thing about modern dance to be transported to an alternate state of consciousness by "Pina," which is utterly free of Wenders' cloying sentimentality (perhaps because it's an elegy for a dead friend) and might be the first of his films I've loved all the way through since his 1987 masterpiece, "Wings of Desire."