The @MentionMachine ranks candidates based on how often they're tweeted about, so congratulations, President Paul 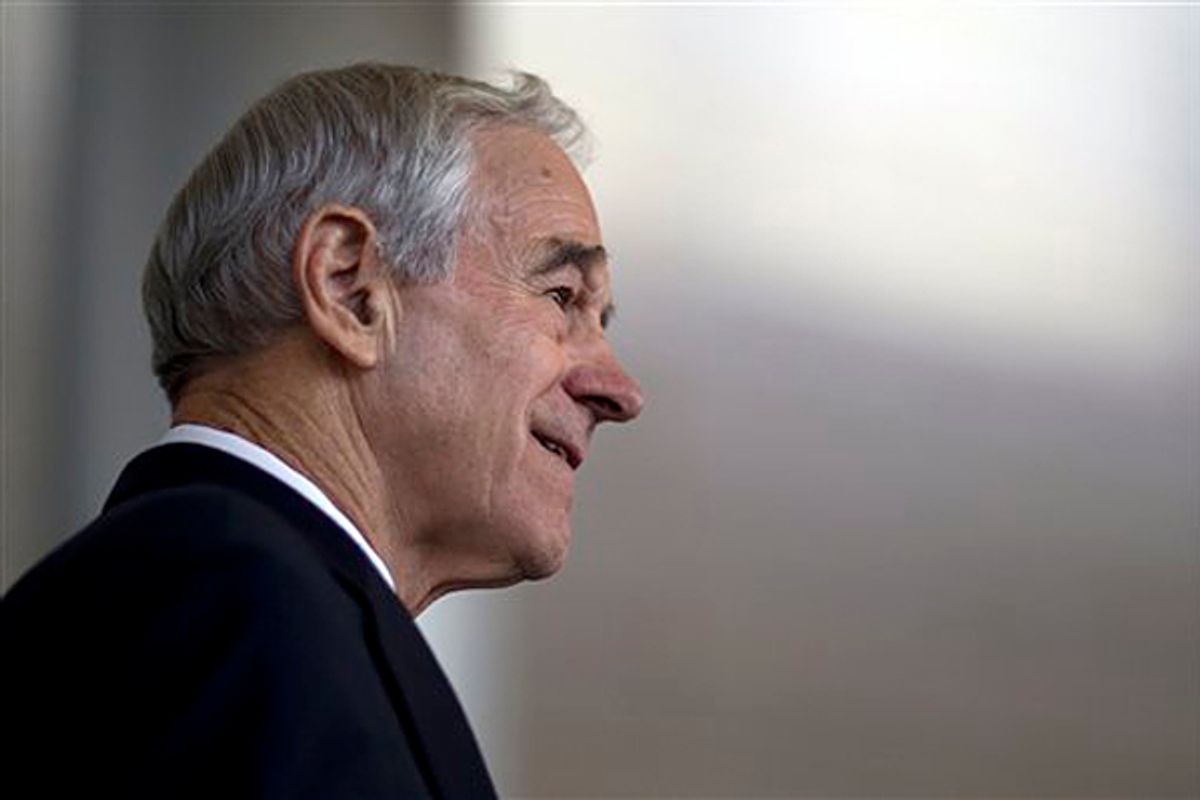 The Washington Post's new "MentionMachine" tool explains in its introductory post precisely what is wrong with it. The "candidate trend app" simply maps Twitter mentions of candidates and then ranks them. Here the Post attempts to make this sound useful:

When Texas Gov. Rick Perry declared his candidacy for the Republican nomination Aug. 13, the same day as the Ames Straw Poll, those watching social streams could have rightfully assumed he had won the Iowa contest. Twitter exploded with Perry mentions, even though he didn’t participate in the straw poll, while the winner, Rep. Michele Bachmann (Minn.), drew far less attention. Social media was the writing on the wall. Perry would soon trend up in polls, surpassing Bachmann and the rest of the field. Twitter was the early — scratch that — Twitter was the real-time warning system.

And then, a few short weeks later, all that "buzz" added up to precisely nothing. So, no, you should not be forgiven for having assumed that Perry had won the Iowa contest. Because if you assumed that, based on "social media buzz," you're horrible at forecasting elections and analyzing campaigns. Twitter was the "real-time warning system" for a media-fueled Rick Perry coverage bubble that burst months before anyone actually voted for a 2012 nominee.

Now, thanks to the Post, we will have a real-time map of ill-informed "buzz" from now until the general election. (And until it adjusts its algorithm, Ron Paul will "win" every day, because he's got a psycho nternet cult.)

This is the distorting effect of minutiae-driven campaign coverage made animate. Here's the Post again:

There are a few ways Twitter variables, or mentions, can be measured or extrapolated to examine trends in campaigns. Growth in number of legitimate followers or a high recurrence of retweets are both indicative of growing grass-roots support. A spike in the number of times a candidate is mentioned on Twitter might signal an event that could alter a campaign.

Even as information-free buzz-tracking this tool is flawed, because it fails to distinguish between positive and negative Twitter attention (I'm guessing Perry's rank on the "leaderboard" would've surged when he forgot that third federal agency). Beginning tonight and continuing on through this year we will have an actual leaderboard for the GOP nomination, ranked by votes and delegates instead of retweets, rendering this entire thing even more useless.

The @MentionMachine (what a name) is too silly to get worked up about (sorry!), but it's decidedly symptomatic of the awfulness of most campaign coverage, which mistakes volume for "grass-roots energy," suffers from staggering historical amnesia, and regularly insults its audience by putting forth ridiculous speculative bullshit (Donald Trump could win!). This isn't a call for the press to simply report on "the important stuff" -- I find Santorum's endorsement from the guy with a zillion kids just as gross and interesting as everyone else -- it's just a call to be smart about the dumb stuff. I'd like to know what it means that an old paleo-libertarian crank with a history of embracing conspiracy theories and white populism has a fanatical base of mostly young followers, not that those young followers give him enough "buzz" to win the nomination (they don't).

Horse race coverage has an audience and a purpose -- I'd just like to see it done well.