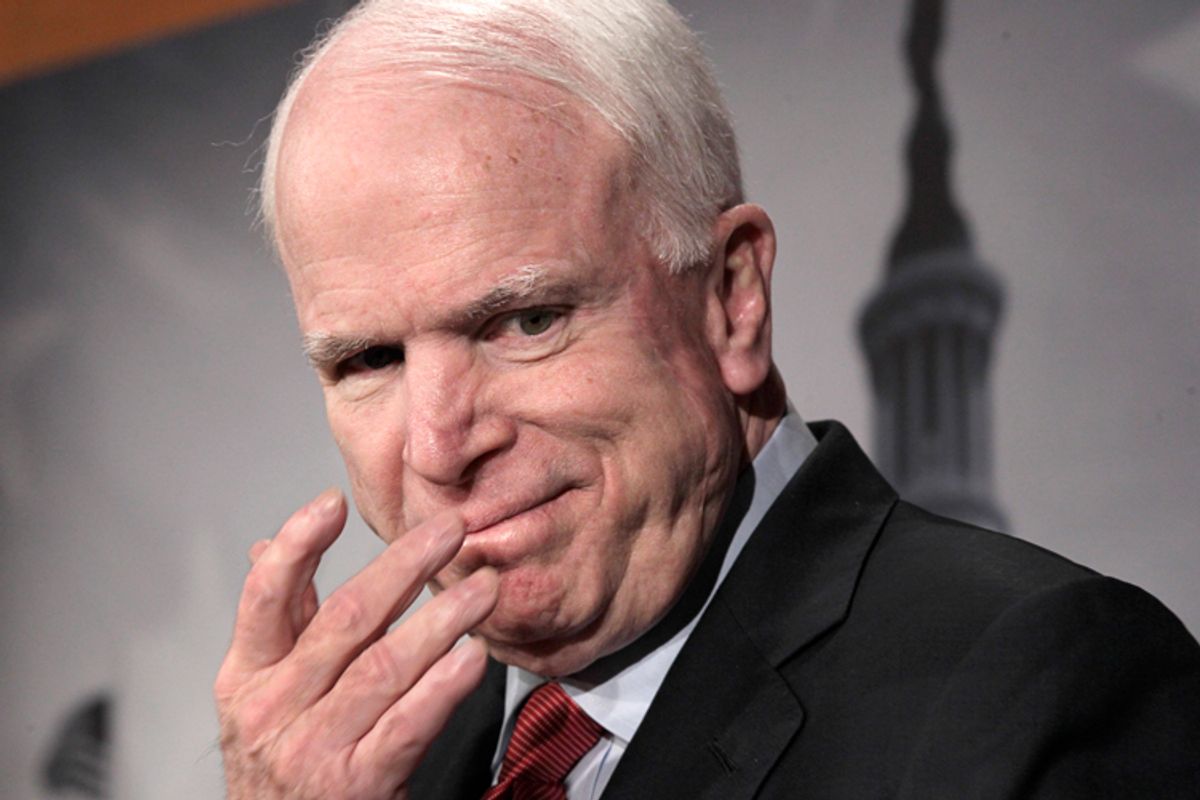 John McCain returned to New Hampshire, the state that made him a star in 2000 and set him on course to win the GOP nomination in 2008, this afternoon to endorse Mitt Romney for president. It's possible that he did this because he believes Romney would make a good president and would pursue sound policies. But it's more likely that he was motivated by something much rawer.

As I wrote before, the "maverick" reputation that McCain enjoyed for much of the aughts reflected a basic misunderstanding about his character. What the press tended to regard as the mark of an unusually principled politician  -- his various high-profile breaks with Republican leaders and conservative orthodoxy -- was more easily understood as the product of McCain's opportunism, thin skin, grudge-holding, and sore loserdom. This is how a very personal confrontation with George W. Bush in the 2000 GOP primaries led McCain to suddenly embrace Democratic positions and rhetoric in the early years of the Bush presidency, only to abandon them when he realized that the 2008 GOP nomination could be his if he became a loyal Republican once more.

What makes his Romney endorsement so interesting is that it seems on the surface like an unusually forgiving gesture. After all, none of McCain's '08 GOP rivals got under his skin like Romney did. This was a result of Romney's decision to position himself as the right's consensus alternative to McCain, a strategy that required Romney to pretend he'd never said or done anything remotely moderate or liberal in Massachusetts while attacking McCain as an untrustworthy ideological apostate. The initial effectiveness of this approach and its transparent phoniness infuriated McCain, who didn't even try to mask his contempt for Romney in debates. But now, four years later, here's McCain providing a potentially key New Hampshire endorsement for Romney. Maybe he's mellowing!

Or maybe Romney's main opponent happens to be someone for whom McCain has even more contempt. That would be Rick Santorum, who declared McCain an unacceptable nominee in 2008 and pleaded with conservatives to sign on with Romney. Santorum's Romney endorsement came just before Super Tuesday '08, when several prominent conservatives -- including Rush Limbaugh -- staged one final, desperate push to deny McCain the nomination. As a candidate this time around, Santorum has continued using McCain as a punching bag, trying to pick a fight with him over waterboarding by claiming that McCain doesn't know what torture is. (Asked to respond, McCain's office replied: "Who?") And all of this came after McCain campaigned for Santorum during his doomed 2006 Senate campaign in Pennsylvania.

So in the battle of McCain grudges, Santorum apparently fares worse than Romney. Unless, of course, McCain is executing a particularly sinister revenge plot here, endorsing Romney with the knowledge that his support could actually make Romney less appealing to the conservative base that he's still desperately trying to win over.