Requiem for my hairline

At 25, I am already losing the locks I took for granted. It's making me a different man -- and impossible to deny 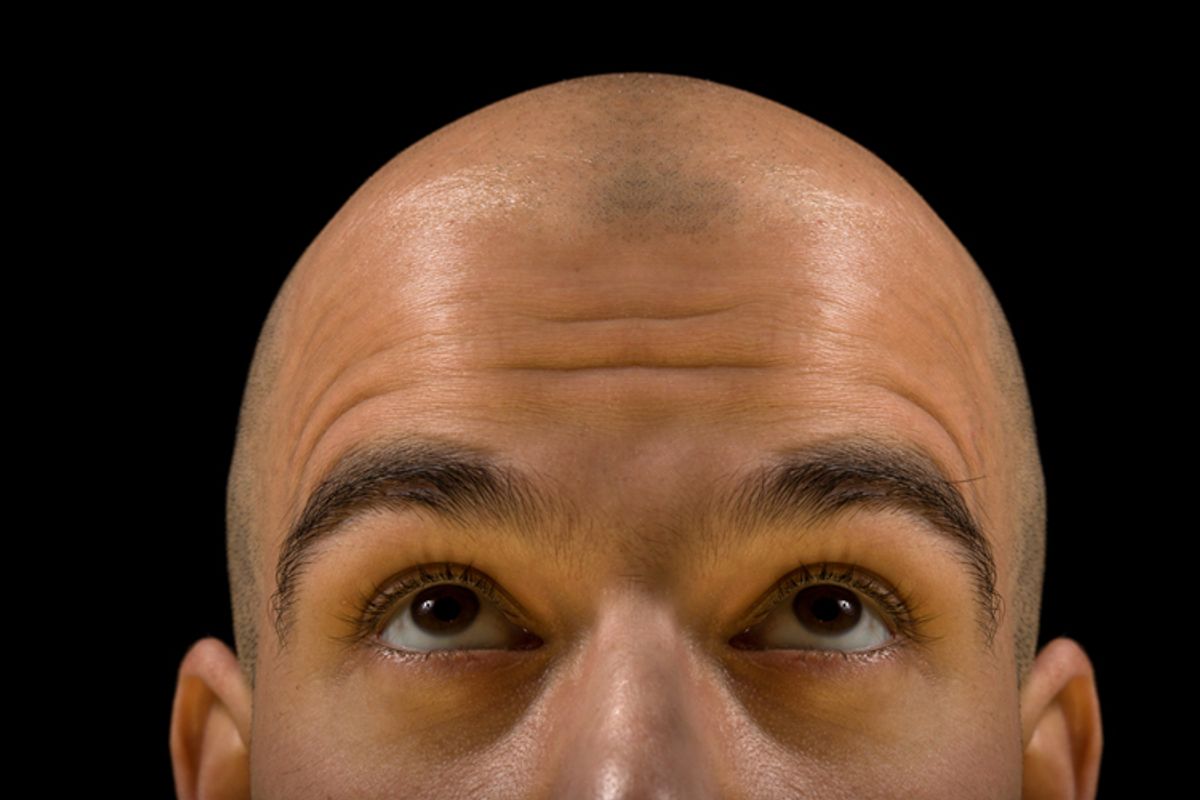 I am 25, and I am losing my hair. It began a few months ago, but that doesn’t even matter: To be balding is to acknowledge baldness as an inevitability. I still have hair, yes, but it doesn't feel like my hair anymore. It feels like I borrowed it from some guy who left town. He went back to high school and he is wearing a hat because he is too lazy to brush his stupid, thick hair. I would like to kick that guy in the knee for taking his hair for granted. I would also like to tell him not to freak out when he catches Margaret Cunningham kissing that guy in the Wendy’s parking lot, because she’s going to put on a lot of weight and be forced to work at the mall in a few years.

Back when I had hair, baldness was only a novelty. I found my dad's Rogaine in the bathroom closet when I was little, and I felt nothing. No sympathy, no fear. I was completely detached. It was just a thing sitting next to the toothpaste. Now I understand the panic he must have felt after he and my mom were divorced and he tried to Look Handsome around new women.

If you are not losing your hair I’m sure this sounds pathetic and needlessly grave. You are probably reading this story while driving in a convertible and winking at blondes at stoplights, and I would appreciate it if you crashed as soon as possible. But if you are balding, I think you’ll know what I’m talking about.

Side effects of my receding hairline include: sitting pants-less in a dark room listening to ambient music; eating gas station burritos off my dashboard; wandering places slouched and dirty like Harry Dean Stanton crossing some train tracks in "Paris, Texas." It is usually the frozen-food aisle of a discount grocery store.

I change shampoos and buy hair vitamins from the aisle that sells fish oil and selenium tablets. I convince myself I will perform the first ever $14 genetic mutation. I seek the comfort of biological fallacies. It’s stress, it’s a shedding phase; my maternal grandfather still has hair like William Holden. None of that really matters. I once read that it’s normal to lose from 50 to 100 hairs a day, but it turns out this is inaccurate, unless you are a cat, which I am not, though occasionally when I am drunk I will sleep on the floor.

I am consumed by feelings of inadequacy near images of Patrick Dempsey. I privately defend the credibility of late-night hair transplant infomercials featuring men splashing in pools and then lying in the arms of women relieved that they're no longer dating the before guy, the one who looks like he is constipated and stuck in traffic. My last romantic encounter came two weeks ago when I was driving through a rainstorm and a South African woman's voice gave me directions from my GPS. She told me everything was going to be all right -- on this drive, for the rest of my life. Then she told me to make a U-turn, because I was going the wrong way.

There is more: People ask if I've just gotten a haircut. This happens frequently. I did not get a haircut. This was not voluntary. My hair was evicted. It came home one day and all its furniture was out on the front lawn. I make radical changes. I overcompensate. I let my hair grow so long I begin to look like a heretic imprisoned in a medieval dungeon. Then I cut it all off. Screw you, hair -- I’ll beat you to it.

I spend a lot of time looking at the heads of strangers. I Google high-resolution pictures of famous men and inspect their scalps. Many famous people are bald. I've built a comprehensive mental library of their awesomely indulgent Sotheby’s acquisitions and staggeringly cleavaged girlfriends. Bruce Willis is bald. Jason Statham is bald. But they also spend the last 16 minutes of their movies in T-shirts soaked in blood and gasoline, disposing of foreign operatives using elaborately designed machine guns or chain saws or sometimes just a pair of calloused fists. I once convinced myself I was having a brain aneurysm, but it turned out it was just pollen allergies. Some of my most traumatic moments involve being unable to decipher CAPTCHA letter sequences.

Jude Law is going bald. He also possesses a waifish elegance, a piercing, squinting-into-the-abyss stoicism, eyes the color of Gatorade, and cheek stubble of perfectly calculated indifference. My facial hair makes me look like a woman transitioning genders in the early stages of hormone therapy.

Larry David is bald – spectacularly so, with the hair he has left encircling his head in a fluffy cloud, like exhaust plumes coming from a space shuttle during liftoff. He has also turned misanthropy into mesmerizing performance art. I hate lots of people too, but mostly just the tall ones, because they are always sitting in front of me during the cool lesbian scenes.

Gandhi was bald. But he wore one of history’s most iconic pairs of eyeglasses and is partly responsible for an entire country gaining its independence. I am responsible for no one’s independence, not even my own, because usually I need someone to tell me that this milk smells OK.

Picasso was bald. He was also once married to a ballerina and co-founded a revolutionary art movement. I have illustrated several bar napkins.

I regret making these comparisons.

There are many varieties of bald: ruthless drug lord bald, monk bald, wily-point-guard-during-career-resurgence bald, Bond villain bald, veteran astronaut bald. Bold, heroic, shiny balds. I will be none of these balds. The topography of my skull isn’t suited for baldness. Neither are my disproportionately large ears. I am substitute geography teacher bald.

Baldness is like walking around with something horrible on my face, except it’s on my head. But it’s actually not on my head -- that’s the problem. It’s on my shirt collar. It’s falling into the urinal water as I'm standing there peeing into it. It’s on my pillowcase. It’s on her pillowcase. I see it there while I'm hovering over her naked body. She’s looking at other things – the ceiling, the door, the flickering lights on her wireless router, my slightly asymmetrical eyebrows. But I'm looking down at her pillowcase. Then later I put on my pants and walk out the door and hope she doesn’t look at her pillowcase. She probably does. I hope she thinks it’s her own hair. I hope she has a dog.

In the shower I line up my stray hairs on the curtain. Sometimes I can count them. It is part eulogy, part chalk line, part Jumbotron montage before raising a jersey to the rafters. “We really had something going for a few years there.” It is masochism and the need to quantify it, to give it context, to make it something tangible. Exactly how bald are you? I see it there and it is shocking, but it is a real thing that is happening. It is there in front of my face and not a hazy, ominous concept lingering on the horizon like an alien spacecraft ready to turn an identity into sawdust.

I am being dramatic; I am certain of that. I am pondering hair density and follicle stimulation. I am realizing that this is a waste of time. I am starting to accept that I am just a guy, who once looked like a different guy, who in a few minutes will be a guy eating cake frosting out of a can.

John Saward is a freelance writer living in Connecticut. His work has appeared in the Connecticut Post, Thought Catalog, Norman Einstein’s, and most frequently the drafts folder of his Gmail account. You can follow him on Twitter at RBUAS.