Rick Santorum is coming for your birth control 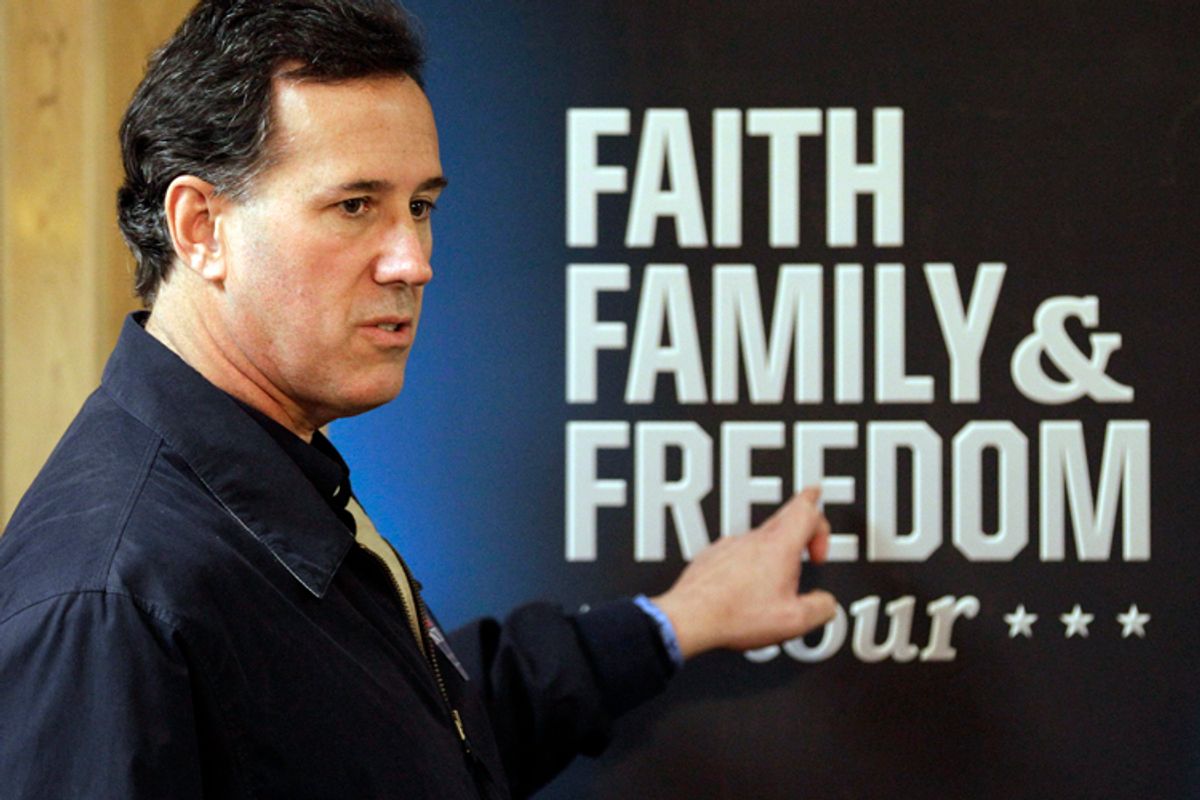 Here is an actual Rick Santorum quote: “One of the things I will talk about, that no president has talked about before, is I think the dangers of contraception in this country." And also, "Many of the Christian faith have said, well, that's okay, contraception is okay. It’s not okay. It’s a license to do things in a sexual realm that is counter to how things are supposed to be.”

These comments were not dug up from some bygone moment of ideological purity, before dreams of a presidential campaign. He said them in October, to a blogger at CaffeinatedThoughts.com (they met at Des Moines' Baby Boomers Cafe).

It's pretty basic: Rick Santorum is coming for your contraception. Any and all of it. And while he may not be alone in his opposition to non-procreative sex, he is certainly the most honest about it -- as he himself acknowledged in the interview.

This is important, because while reproductive rights are always cast in terms of pro or against a woman's right to an abortion and in what circumstances, even liberals are surprised to find out what social conservatives really want to do about contraception. Liberals are even willing to cast the proposed defunding of Planned Parenthood and all Title X programs (a position that has become mainstream in Republican circles) as an abortion issue, when it is actually about contraception. (The Hyde Amendment already bans almost all federal abortion funding.) So is this about "babies" or is this about sex? Rick Santorum isn't even pretending it's (only) about childbearing.

Speaking to ABC News' Jake Tapper, Santorum recently reaffirmed his opposition to Griswold v. Connecticut, the 1965 Supreme Court decision that struck down a ban on discussing or providing contraception to married couples, and established a right to privacy that would later be integral to Roe v. Wade and Lawrence v. Texas. (It is generally better-known how Santorum feels about gay people.) That would be the case where the majority asked, "Would we allow the police to search the sacred precincts of marital bedrooms for telltale signs of the use of contraceptives? The very idea is repulsive to the notions of privacy surrounding the marriage relationship." Rick Santorum disagrees. He thinks, using the currently popular states' rights parlance, that “the state has a right to do that, I have never questioned that the state has a right to do that. It is not a constitutional right, the state has the right to pass whatever statues they have." This is a view Santorum has held at least since 2003.

Santorum isn't alone. Five of the current or former Republican presidential candidates signed the Personhood Pledge (though unlike Santorum, Michele Bachmann and Herman Cain, Newt Gingrich and Ron Paul added some caveats to their support). Mitt Romney told Mike Huckabee he'd support an amendment saying life begins at conception -- which Personhood folks interpret as the fertilization of an egg, meaning that contraceptives like the IUD and sometimes even the pill are murderous. (Good luck figuring out what Romney actually thinks on that one.)

Santorum just happens to be happiest putting it at the top of the agenda. In the Caffeinated Thoughts video, he promises that “all those issues are going to be front and center with me," and says, "I know most presidents don't talk about these things and maybe people don't want us to talk about these things. But I think it's important that you are who you are... these are important public policy issues." Among those important public policy issues: Sex for fun. In the same video, Santorum bemoans sex becoming "deconstructed to the point where it's simply pleasure."

Many people don't want them to talk about these things because it shows the true colors of what social conservatives wish for this country, which is very different from what Americans wish for themselves. Maybe the near-win in Iowa yesterday is the end of the road for Santorum, and maybe no one will ever succeed by openly suggesting a contraception ban that would send the condom police into America's bedrooms. But that's clearly the world Santorum wants, and it's one that is entirely consistent with the antiabortion movement's goals. That would be the same movement that over the past year decided it had a mandate in states across the country, the same one that demanded endless obeisance from the Republican candidates in Iowa this year -- and mostly got it.